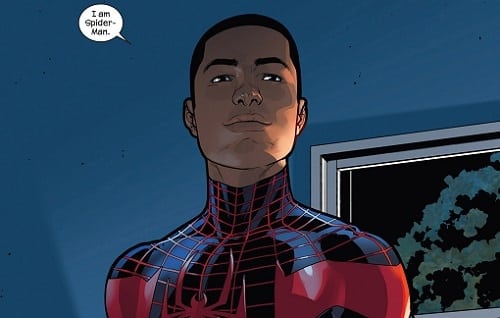 Waves of information are coming to shore from the next Spider-Man flick, sub-titled Homecoming. With rumors of actors and characters, including those of Micheal Keaton and Vincent D’Onofrio, it looks like Marvel Studios will have another hit on their hands.

But all this hub-bub, especially since we just got our first hint of the new guy, lets us forget that Sony still has other Spider-Man projects in development. There’s that solo Venom feature, not affiliated with the MCU. There will also be that theatrically released animated film. You read that right: Miles Morales. Before Tom Holland was cast, there was clamor for the next Spidey, whom was previously brought to life by Tobey Maguire and Andrew Garfield, to be the the kid whom Peter Parker passed the red tights onto. Morales became Spider-Man in the Ultimate universe after the Parker of that universe died. Then, after the second Secret Wars, Morales met the Parker of the 616/original universe, and join forces.

Soon, Marvel stirred the pot by saying that their Spider-Man has to be white and heterosexual, putting to rest the Morales rumors, and Garfield’s wish to experiment. While this news has yet to be confirmed, the chance for Miles is looking good again.

The still untitled, theatrically-released, animated, Sony-produced, Spider-Man film, written by Phil Lord and Chris Miller (The Lego Movie), will swing into theaters December 21, 2018. But before that, catch Tom Holland in the MCU, with Spider-Man: Homecoming, July 7th, 2017.