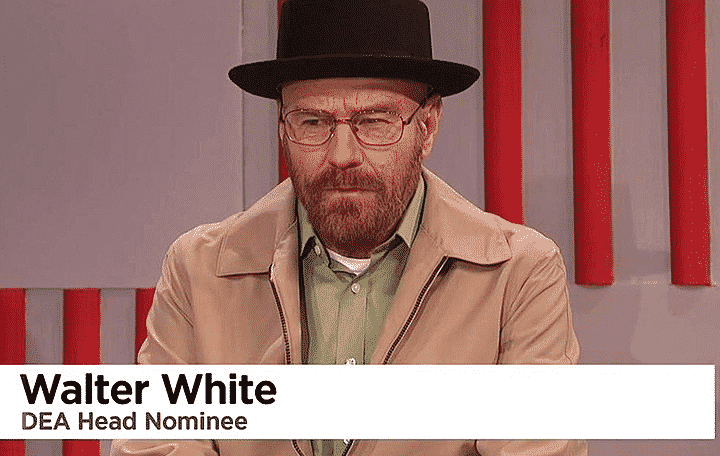 Breaking Bad is one of the most talked about TV shows of all time and is regarded by many as one of the best series ever made. Fans across the globe were hooked on not only the drama but on Bryan Cranston‘s performance as Walter White. Cunning, manipulative, cowardly and at times incredibly brave, he was a character that many people could relate to on many different levels. An everyday man who decided to take matters into his own hands and seize opportunities when they arose.

Well now Cranston has returned to the role that has made him a household name for a skit on Saturday Night Live. Poking fun at Donald Trumps cabinet picks, we see Heisenberg appointed as the Head of the DEA in which he backs the Presidents decision on building a wall across Mexico and how he would like to make ‘America Cook Again,’ amongst a plethora of other heavy handed references to the TV show.

Some fans will get pleasure of seeing Cranston return to the role, even if it is in spoof form however others maybe disappointed at what is effectively quite a poor sketch.

You can watch the full skit down below:

With John Cena having hosted the latest episode, a lot of commentators have praised his hosting skills and even saw comedic potential in his performances but overall the perception has been that the show suffered due to poor writing and uninspired skits.

So what did you make of the sketch? Do you think that it was a wasted opportunity? Did you enjoy the latest episode of Saturday Night Live? Sound off down below!