After nine years, multiple franchises and god-knows how many TV and movie projects, Marvel have already managed to bring the majority of their properties onto our screens in some format. In fact, the sheer volume of characters they’ve chosen to lift from the pages of their comics would lead you to think that they haven’t got many left that they haven’t adapted.

Well, you’d be wrong in thinking that. Because as sure as night meets day, Marvel will never run dry when it comes to finding new source material to work off. There’s just so goddamn much of it to wade through.

So who are the big names and heavy hitters hidden in the history of our Marvel comic books that we still have yet to see in our cinemas? Who have previously been considered too difficult to adapt, or have been mired down in legal battles over their ownership rights? Here’s our top 10… 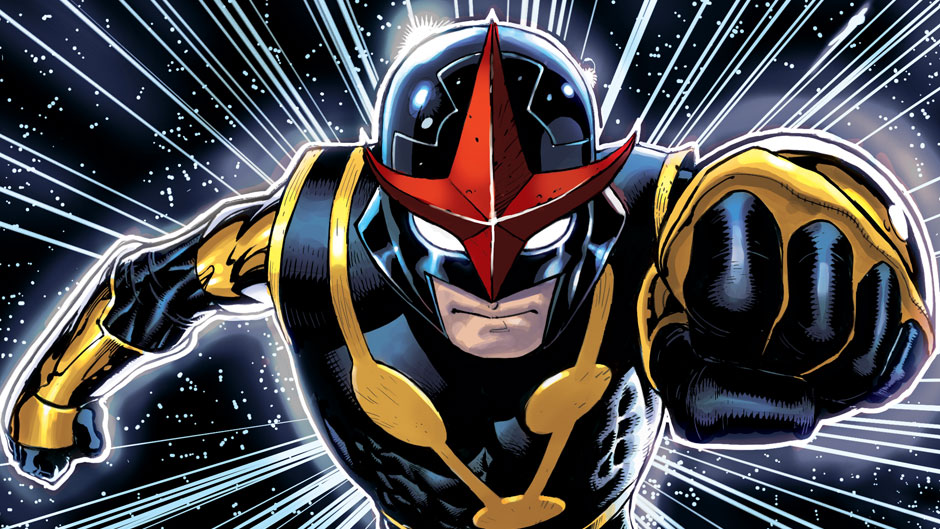 Given the introduction of the intergalactic Nova Corps in ‘Guardians Of The Galaxy’, Nova would most likely be the easiest of the characters on this list to bring into the MCU, and the one we’re most likely to see anytime soon. An intergalactic space cop much in the same vein as the Green Lantern, both of the comic versions of Nova (Richard Ryder and Sam Alexander) were high school kids, selected to represent Earth for the Nova Corps.

When adopting the mantle, both young characters are inexperienced, and struggle to comprehend and deal with the newfound powers and responsibilities that their helmet grants them. But the Novas have formed a key part of many of the big Marvel storylines, either supporting the Avengers or the Guardians in battling a variety of extraterrestrial threats. When considering which of the two to introduce the character, Sam Alexander would be the more intriguing character, with the revelations that his alcoholic father is a former Nova Corps officer, who nobody believes.

Kids. They’re never happy, right? From Legion, to Daken and finally to Skaar, it seems being the super-powered offspring of a Marvel Hero means that you’re most likely going to be a psychotic killer who occasionally does good, rather than the other way round. But then, given the way he came into this world, it’s hardly a surprise that the son of the Incredible Hulk has a few ‘daddy issues’.

Conceived during The Hulk’s brief marriage to an alien queen, he rose from his dead mother’s body and fought a bloody war of attrition across his home world, before heading to earth to find and kill his father. Discovering that Bruce Banner had no knowledge of him, and was in fact a very different Hulk to the one he believed, the rage-filled warrior has been forced to adapt to life on Earth, occasionally offering his services to heroes and villains depending on what mood they happen to catch him in.

So what could be cooler than a claw-popping Canadian redneck with anger issues? What else could the Weapon X programme give us that would make us think, “Now, that is something else…” How about a international jewel-thief with a propensity for all things French, a tendency to settle most issues with a pair of handguns, and the same regenerative healing powers as old Logan himself? Ladies and Gentlefolk, I give you, Fantomex.

Sharing Deadpool’s love for keeping his face covered, the trench-coated cousin of everybody’s favourite Canadian couldn’t actually be more polar opposite than Wolverine. He has a love for all things cultured, including art, literature and food. He’s fastidiously exact and ‘just so’ about every aspect of his life. Oh. And he’s a ruthless cold-blooded killer, that’s just as angry at his creators as Logan is. And when the two of them team up, insurance companies go bust. 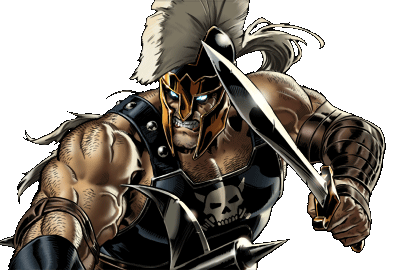 It turns out that Thor and the Asgardians aren’t the only dieties who inhabit the MCU, with a whole host of other ancient gods and demigods cropping up every so often to unleash their own individual brands of chaos and mischief.

Alongside the Marvel incarnation of Hercules, perhaps the next most colourful of these is Ares. The son of Zeus, and the Greek god of war. Ares lives for conflict, so much so he was initially introduced as an recurring enemy for Thor, before realizing he could do just as much fighting as an Avenger.

To describe Ares as ‘an exravert’ is somewhat of an understatement. Think Arnold Schwarzenegger at the height of his action movie career, crossed with Russell Crowe in ‘Gladiator’, and you should have the concept pretty much nailed. Happy to embrace any weapon in order to pursue a fight, he’s a comfortable toting a pair of M16’s as he is a pair of double-headed axes. 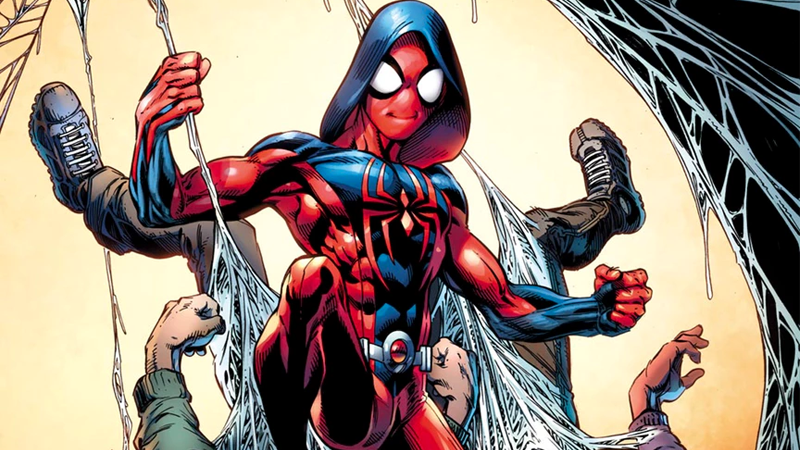 If ‘Civil War’ proved anything, it’s that Spider-Man is still one of the most precious and beloved characters that Marvel have ever managed to create. Despite two flawed series of films, fans will forgive and forget any sins that might have dogged previous incarnations of the wisecracking wall-crawler, which is why Marvel need to bring some other variations of the character into the MCU. So how about starting with his conflicted and cloned cousin, Ben Reilly?

When the Jackal (who we incidentally also need to see bought into the MCU) cloned Peter Parker, Reilly was the first clone to survive intact. Brainwashed into thinking he was Peter, Reilly eventually decided to fight crime under the identity of the Scarlet Spider, choosing to leave New York and travel the rest of the country. But time and again his past and the legacy of Peter Parker has pulled him back to the Big Apple, all to often to tragedy and loss.

His feelings towards the original Spider are somewhat in conflict, but Reilly always manages to end up doing good, despite his tragic backstory.

America seems to have no end of heroic protectors in the MCU, but with the exceptions of Peggy Carter, Edwin Jarvis, and the Fitzsimmons Agents, the United Kingdom seems to be somewhat slacking in providing any hero talent.

Step forward Great Britain’s very own answer to Captain America, Brian Braddock. Gifted his powers by none other than Merlin himself, Brian has not only the British Isles to defend, but also every other dimension in existence. Put into that perspective, it kinda makes Steve Rogers look a bit lightweight really.

And the introduction of Captain Britain into the MCU doesn’t only bring Brian Braddock, it also brings his entire family history, as well as his own private army as well. You see, the Braddocks have a fine tradition of heroics, with his father and brother being inter-dimensional peacekeepers, and his sister eventually bonding with a Japanese warrior to become Psylocke.

That’s not to mention the fact that every dimension has to provide a Captain Britain of its own, making a huge Legion of them. That’s some supporting cast to cater for.

With the persistent rumors that Chris Evans will be looking to hang up his shield in the aftermath of ‘Infinity War’, it seems likely that the hunt for a new Captain America will soon be underway. And whilst the Secret Avengers already have two candidates within their ranks, in the forms of Sam and Bucky, will the MCU be brave enough to try something different, and bring in one of the alternative Captain Americas from the comics?

The Marvel comic timeline is filled with flawed and failed efforts to replicate the super-soldier serum. The US Government has been obsessed with creating an army of Captain Americas, which has resulted in some notorious efforts to create new versions of Steve Rogers. John Walker is one of the more interesting and enduring of these. A former Vietnam vet, he was persuaded to stand in for Rogers, and underwent trials with a flawed serum.

The results were that he was corrupted, and driven mad by the trials, but eventually battled back, and fought alongside Rogers as the US Agent. This would result in his family being murdered, and him also being crippled, but never giving up the ongoing fight against evil.

So who’s heard of Robert Reynolds then? No, not Ryan Reynolds, ROBERT REYNOLDS. Nobody? Well, that’s no real surprise, because he’s one of the darkest secrets to have ever been buried in the depths of the Marvel Universe. His alter-ego, The Sentry, is arguably the most powerful Marvel superhero there has ever been.

Trained by the rest of the Avengers, he adapted his powers for good with the help of Hulk and Spider-Man, saving the earth from destruction, so why has nobody ever heard of him?
Because he sadly had to remove himself from existence in order to save the Earth from his sworn enemy, The Void.

The reason why? Because The Sentry and The Void make up the two halves of Robert Reynolds, and the only way to stop The Void from manifesting was to erase the memory of both halves of Reynolds’s personality.

Later in life, suffering mental delusions and plagued by half-memories, Reynolds remembered being a hero, and returned to serve as an Avenger. Manipulated by Norman Osborn into serving as a Dark Avenger, he was eventually consumed by The Void, and defeated by an alliance of heroes, villains, and Asgardians. Though not without great cost. 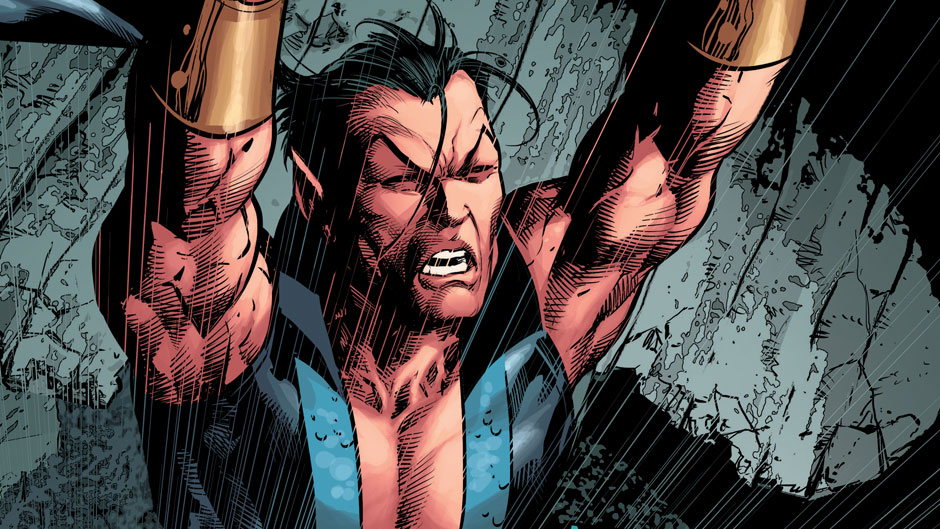 Sure, everyone over in the DCEU is raving about Aquaman’s drastic new image change, but there’s only one undersea ruler that we care about. As a founding member of the Avengers, and a recurrent participant in all of the key adventures and storylines that have occurred within the Marvel comics, it’s outrageous that Namor still hasn’t managed to find his way into the big screen in some format. Because this is what the MCU really needs, a whole new civilization of pissed-off Atlanteans.

When you take away the ‘wandering around in his pants’ aspect, and the ‘he has little wings on his heels’ issues, the modern reboot of Namor is perfect for the MCU. He has some real deep-rooted emotional issues, and is basically angry at EVERYBODY. He’s also quite the ladies man, having a string of ex-wives that return to cause him grief, and also an unhealthy obsession with other people’s wives. But despite his flaws and issues, Namor usually does the right thing, though not without causing utter chaos and havoc en route to achieving it though… The creation of the MCU’s Netflix side-verse, and also the releases of ‘Deadpool’ and ‘Logan’ have finally opened the doors for the more extreme and R-rated Marvel properties, which has hopefully paved the way for us to finally see a live action version of Marc Spector. Or Jake Lockley. Or Steven Grant.

That’s right, because in addition to being a totally bad-ass special forces soldier, and also the avatar of a vengeful ancient god, Marc Spector also has some pretty serious personality issues.

A mercenary, who was killed by his double-crossing partner whilst in an Egyptian temple, Spector was bought back to kill on behalf of the vindictive god Konshu. The deal? He gets his life back, but has to spend it spreading terror and death in Konshu’s name, thus keeping the old god alive.

The only way for Spector to deal with that was to become an anti-hero, targeting villains and street scum to avoid harming anybody else, Think Batman, but with less of the ‘not killing’ issues. The reason he wears a white suit? So the bad guys see him coming.

What’d you think of the list? Would you like to see these characters in the MCU soon? Be sure to tell us your thoughts in the comment section below!