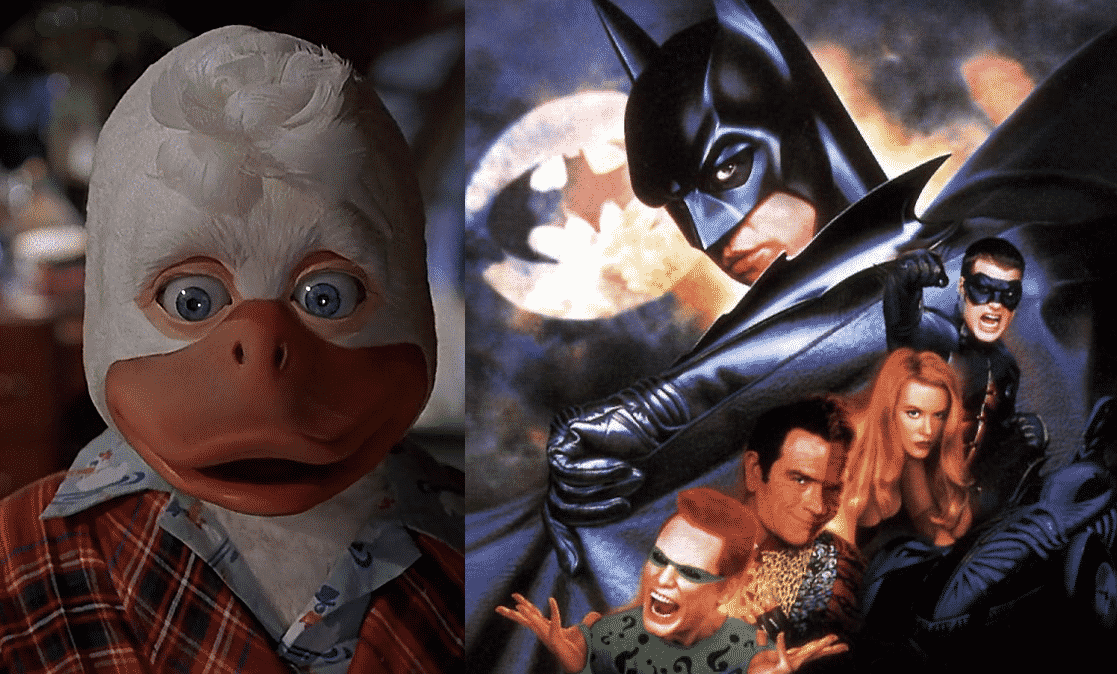 In these recent years, we’ve been blessed with a glut of amazing superhero movies. Deadpool, Guardians of the Galaxy, The Avengers, the Nolan Batman trilogy; all of these with engaging, fully realized characters, cheeky dialogue, and action that would knock the pants right off of your butt. It’s been a good run for comic book heroes.

However, as with any genre, there are the black sheep. The ones with a little less character development, mediocre scripts, and effects that don’t measure up. The poorly received films that are pushed aside in favor of their bigger, brighter siblings.

Well, today, we say no more. We stand in defense of these “terrible” films. In effect, we here at ScreenGeek are the true heroes.

*Note* Sylvester Stallone’s Judge Dredd (1995) was floated around as a possibility for this list – but we all agreed it was just too awful to make a case for.

What’s wrong with this movie? In all honesty, quite a lot. What makes it such a disappointment is that it brought great things to the X-Men trilogy, but its blinding blunders caused it to fall short. The Phoenix was poorly adapted, and the movie killed off key characters; both Cyclops and Professor X. There was a completely new concept of measuring Mutant’s powers which seemed unfathomable – a class-based scale of 1 to 5, on which The Phoenix was 5. Magneto and Pyro were recognised as the only mutants higher than “level 3” by Callisto. It just seemed random and patronising.

What’s good about this movie? Surprisingly quite a lot. People hate on it mainly because it was a disappointment, but we have a lot to thank it for. X3 introduced Kitty Pryde for good, and Ellen Page was a fitting actress for the role. Colossus played a bigger part in this film, and though his character was barely explored, he had some cool moves in action sequences (notably the opening scene in which he throws Wolverine). Pyro had a showdown with Iceman, which was everything you’d dream it to be. Beast and Angel made their debuts (better late than never…). Wolverine shone as ever, and Storm was given a bigger role – the dynamic between the two as now leaders of the X-Men was enjoyable.

It seemed somewhat emotional seeing the relationships between allies and even enemies come to an end at the notion of a return of mutant kind to the normalities of human life. Whatever was wrong with this movie, it’s hugely entertaining.

Streaming on Amazon, iTunes, GooglePlay, Vudu, Fandango, and the Playstation and Microsoft Store.

Despite the fact that everyone seems to hate Blade Trinity, I really enjoy it. The film stays true to its predecessors. The vampires are as bloodthirsty as ever. And Blade still acts like Blade, regardless of how Wesley Snipes acted on set.

The film doesn’t lend itself towards romance, or any of the other subgenres that watered down vampire lore in recent years and that’s why I can enjoy it. Everything works like it should. And who couldn’t love the scene when Dracula shows up to kill two gothic posers working a store full of Dracula merchandise? All in all, it’s a great time I’d say.

This defense was written mostly in defiance of a previous list posted on the site (Worst DC Movie Castings), of which I mostly agreed, except for on this point: I actually kind of like Constantine, and not just because Keanu Reeves looks damn fine in a suit. The film does have its issues, don’t get me wrong. It’s plodding at times, the plot gets convoluted, and the dialogue is pretty silly, even by comic book standards.

By no means a great movie, Constantine is still legitimately a lot of fun as a film. It is stylish and daring, and the cast is talented and passionate, even for the mediocre script they were handed. The special effects are still holding up well, considering its age, and the world that is built is one that you want to see more and more. Where it fails is that it bites off more than it chew through; however, it’s worth a watch if just for the moments of brilliance. It’s dark, it’s imaginative, and dammit, I liked it. Even if Keanu was a bit monotone…

Howard the Duck. Many Marvel or MCU fans cringe at the sight of those words. Only recently in James Gunn’s Guardians of the Galaxy did favorable interest peak when the Marvel character popped up in an after credit scene. But I remember a time when the name Howard the Duck made people wince in remembrance to the 1986 film that George Lucas decided to produce when he was finally done with the Star Wars legacy…at the time.

After its initial very short run at the theater and being universally panned by all critics and fans, the film came across my television late one night on HBO (thanks to the power of a “Black Box”) and I knew this film would reach the height of cult status and forever have a place in my cinema heart.

I know there are films that follow the comics too well, or not at all, but Howard the Duck is the product of the ridiculous era of 80’s questionable ratings system. The film is, for the lack of better word, f%$k-diculous. A duck from Duckworld finds himself stranded in Cleveland, Ohio, befriends a singer, works at a lewd bathhouse, joins a band, and fights an intergalactic threat that calls itself “Dark Overload of the Universe”. You smell that? That’s the smell of cult classic.

My childlike mind at the time couldn’t fully process what was going on, but I knew that it was one of my favorite films.  No matter how bad the film looks, to this day I can still watch the movie with the same amount of joy as I did with I was a kid. Matter of fact, I’m going to see if I still got my VHS recorded copy of the movie and snuggle up with a nice bottle of bourbon for the night.

Streaming on iTunes, Amazon, and Vudu

Batman (Val Kilmer) is up against two of his arch-rivals, Two-Face (Tommy Lee Jones) and the Riddler (Jim Carrey). At first, Two-Face works by himself, terrorizing the city. Edward Nygma works at Wayne Enterprises as a researcher and thought up a device that allows someone to enter television waves into people’s minds. He is eventually rejected, suffers a breakdown, and becomes the Riddler. He teams up with Two-Face, and Batman is now faced with not one, but two terrorists he must defeat to keep the city safe. Robin’s origin comes about in this film, and Batman is not alone in his endeavor.

Anything with good versus evil can be made epic. In the 90s, that meant the costumes, camera work, and set design were sometimes a bit crazy. Being that this film was mostly about crazy people doing crazy things in a dark and desperate city, and, don’t forget, that Tim Burton was one of the producers (you know how far he takes things), the film is unreal in a highly suspenseful, albeit twisted, way. The cast is top notch, the dramatic effect in every second it plays out is off the charts, and the ride is wild. And never forget the batsuit with nipples.

Alien vs Predator: Requiem is a film hated by most (including our Editor-In-Chief). And I honestly can’t blame people given its stereotypical characters, bland settings, and awful cinematography. But you know what it does have? A lot of great violence. And, in the end, I think that does nicely for those who prefer the original Predator’s grindhouse B-movie roots.

It might’ve done a lot of things wrong, but at least it didn’t make the aliens or predators any less vicious.

I’m saying it now, Green Hornet gets a bum rap. The movie holds a 5/10 rating on Metacritic. Almost nobody ever remembers that it existed, and plans for a sequel never materialised, with a reboot stuck in development hell. Which is massively unfair, and I’ll tell you for why. The main reason for the negativity towards the movie comes in terms of the critical indifference it received, and a distinctly average box office take. Critics complained that the principal cast and writers were capable of so much more, and giving distinctly average performances. Which is bullshit.

Sure, Christoph Waltz might not be as on his game as he was in Inglorious Basterds, but he still brings a riotously humorous performance, verging on breaking the fourth wall at times. And whilst Evan Goldberg and Seth Rogen have both produced much better scripts and performances in other projects, both bring a signature quality to the material that is better than anything anybody else could have.

In terms of the box office, a global take of $228M off a budget of $120M may not be something to sing about, but it’s also nowhere near a flop. The movie was released at the height of the Superhero revolution, competing with Captain America, Thor, and X-Men: 1st Class. It’s also nowhere near the worst comic book movie of that year, with Ghost Rider: Sprit Of Vengance firmly anchored to the bottom of the genre. You’re also most likely have forgotten that the cast contains early performances from David Harbour (Stranger Things) and Chad Coleman (Walking Dead), as well as the token cheeky James Franco cameo.

It’s a colourful and loud celebration of the lighter and happier days of superhero fayre, aping the Adam West incarnation of Batman with its humour and outright campness. There’s a brilliant bromance between Rogen and co-star Jay Chou, and the whole concept of how badly a modern day millionaire would fuck up attempting to be a superhero is massively compelling. Yes, sometimes it massively loses its way crossing the line between comedy and drama. And, yes, Cameron Diaz clearly hasn’t managed to improve her performance in The Mask, and may as well not be there. But you need to revisit it, and realise that the overall move to condemn it to the wastepaper basket of comic book history is truly unfair. Go on. Watch it again. You know you want to…

No not the Punisher that featured Thomas Jane as Frank Castle, or Ray Stevenson, or Jon Bernhtal. I’m talking about the dirty 80s version that had castle played by Dolph “Ivan Drago” Lundrgen that received mainly negative reviews and holds a 28% approval rating at Rotten Tomatoes. When the film was released, many critics saw it as a boring one-man battle with never-ending actions scenes and horrible cheeseball sets with special effects. But come on, this was the best representation of the character until 2016.

What made the film so great was the dirty and griminess of the whole film. The people behind the film knew what they were doing with the character and decided to go balls to the wall. Granted, Punisher Warzone tried to do the same thing, but that film was like throwing bullets and blood in a blender made of skull and bones and pressing the “Spin” button.

This film handles the character development mixed with a little bit of comedy much better than the Thomas Jane version could do and looked way cooler doing it. Plus something about Dolph Lundrgen choking the s%&t out of a bunch of yakuzas just looked bad ass. Jon Berntahl is the new generation’s Punisher done right, but Lundrgen will always be my Punisher.

So there you have it. What do you think of these movies? Be sure to tell us your thoughts in the comment section below!