Following the arrival of Jon Bernthal’s version of The Punisher in the MCU last year, the character has been enjoying somewhat of a resurgence of late.

In previous outings, critics and audiences alike had been left somewhat cold by the dead-eyed stare and ultra-violent methods that Marvel’s most notorious vigilante used in order to wage his never-ending war on crime. Bernthal, however, took what some had previously seen as a two-dimensional and sketchy avatar to whole new levels of pain and heartbreak, finally capturing the sorrowful essence of what it meant to portray the true Frank Castle.

With the Punisher’s star now thankfully back in the ascendance, it seems prudent therefore to revisit one of his original cinematic offerings. So which of the three previous Punishers will we be looking at?

No, my friends. We’re going to revisit the most divisive Punisher movie of the three, Ray Stevenson’s ‘War Zone’.

Prior to Tom Jane’s version even being released, Marvel had already announced in advance there would be a sequel. Creative issues would eventually cause both Jane and director Jonathon Hensleigh to decide not to come back aboard, which led the studio to treat the new movie as a reboot, rather than a straightforward sequel.

What Lexi Alexander went on to produce was both a critical and financial mess, widely acknowledged as one of the worst things that Marvel have ever put their name to. Of course, since the release of Warzone, the MCU has gone on to re-write the rule book on superhero movies, spawning a number of spin-off projects including a host of dark and foreboding Netflix shows.

So watching the third Punisher movie today, when laid against everything that’s been produced since, is there any room to grant forgiveness for past sins?

First up, for a significant number of fans of the character, Ray Stevenson IS the Punisher. It’s almost like he was born to play Frank Castle. Certainly a much better physical match for the role than Tom Jane was, he is presented virtually identically to some of the source material from the legendary MAX imprint.

In terms of the way his incarnation is styled as well, it’s far closer to the comics than any of the other versions. His weaponry and accessories are largely custom, and integrated into the rest of his equipment. Gone are the tight tee-shirts and leather overcoats, replaced instead with bulky protective gear. It’s a much more grounded and realistic portrayal of how a character like this would go about his daily business.

In terms of the action in the movie, it’s comparable to anything the Netflix shows have produced, and they pride themselves on their levels of grit and violence. You could even argue that Alexander, a former kick-boxing champion, produces set-pieces and fight sequences far more entertaining and engaging than those found in Luke Cage or Iron Fist.

The deaths that take place here are hauntingly memorable. A man’s face is smashed to pieces with one blow. A granny loses her head to a shotgun blast. A free-runner disintegrates under an RPG strike. For fans of everything overly loud and overly incendiary, this movie ticks every box, building up to the mother of all face-offs. Frank Castle Vs The World. 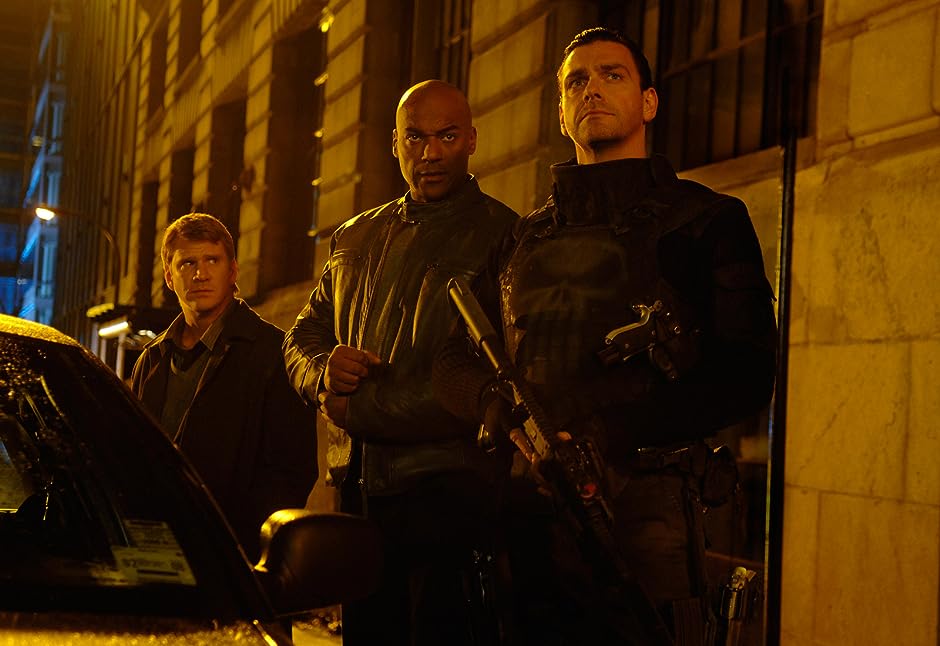 The problem, though, is the way that Alexander goes around framing and presenting the successful elements and sequences that she and her team came up with. Taking a leaf out of Joel Schumacher’s book after he was handed the keys to Tim Burton’s ‘Batman’ franchise, she chooses to forgo the straightforward darkness of the previous outings, and replace everything with a much more lurid and colourful visual style. It just doesn’t work.

As The Punisher moves around New York in pursuit of his targets, he’s bathed in suffocating neon and strobe lighting. Everything is smothered in a thick layer of red or purple lighting. And then there’s the villains.

It’s well documented that Marvel struggle to bring their villains to the big screen, but this is high campery of a whole new level. The usually dependable Dominic West is forced to hide beneath a thick layer of prosthetics and an even thicker accent, barely escaping the project with any dignity.

The fact that he does is in no small part due to the performance of former ‘X-Files’ actor Doug Hutchison, who seems to playing a villain lifted straight from some kind of messed-up kid’s nursery rhyme. These bad guys are neither intimidating, scary, or believable – and don’t even get me fucking started on the free-running Rastafarian Irish character…

The movie still holds somewhat of a warm place in my heart, if only for the effort that Stevenson, Colin Salmon and Julie Benz put into their performances. The fight sequences compensate for the weak script and overall conceptual issues, and hidden somewhere inside all of the noise and chaos is a gritty and dark portrayal of The Punisher that unfortunately landed a few years ahead of its time.