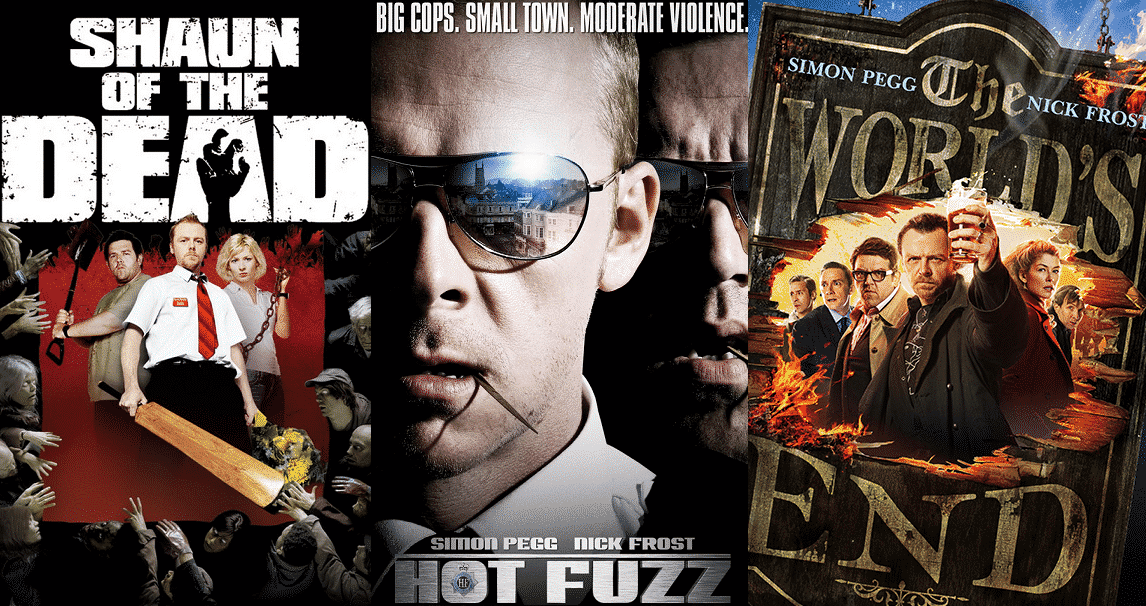 Edgar Wright is one of those directors whose style is eclectic and kinetic without the overload. His films have been known for having great music that elevates the story to another level that is worthy of toe-tapping. His comic book adaptation of Bryan Lee O’Malley’s Scott Pilgrim vs. The World gave the audience a musical through the “Art of Fighting” (see what I did there?) that gave us a wider view of Wright’s talent as a versatile director.

His next film, Baby Driver, is another extension of his musical talent, but this time through the original idea of displaying the music through the mind of a getaway driver and his need to have the right tune playing while he works.

I believe Wright has always had a talent for musicals and gave us a huge hint of that in his well-known and highly regarded Cornetto Trilogy. I know there are obvious numbers, like “Queen’s Don’t Stop Me Now” choreography scene from Shaun of the Dead or The Doors’ “Alabama Song (Whiskey Bar)” featured in The World’s End. Yet, I would have to say his love for music bled further into his dialogue, stage action, and camera direction, and if you really pay close attention, you’ll be able to spot the beats, cues, and “1, 2, 3” dance moves.

In the first installment in the trilogy, Wright’s Shaun of the Dead tackled its hidden music through the use of dialogue. Certain scenes had the characters going back and forth in a way that came off as a musical number. In the first scene of the movie, Shaun and Liz are discussing the state of their relationship. When each one mentioned one another’s friend, it was that friend’s cue to step in and give verse in the song that was already in progress.

Ed (Nick Frost) gives his own introduction when he jokingly comments about Shaun’s mother with the line “she’s like butter”. This verse would lead everyone on Liz’s side – including Liz— to sing in perfect rhythm with each other when calling Shaun’s name.

Another example of the dialogue being used as a form of music is the breakup scene with Liz and Shaun. When Shaun makes his plea with Liz, she cuts him off and proceeds to go down the long list of failed attempts Shaun made while trying to save their relationship. Liz fires away at a fast pace that would come off as a song if you could just include a piano in the background. This method would be used again later in the film as the gang – minus Shaun— end up at the Winchester as a last attempt to survive the zombie apocalypse. 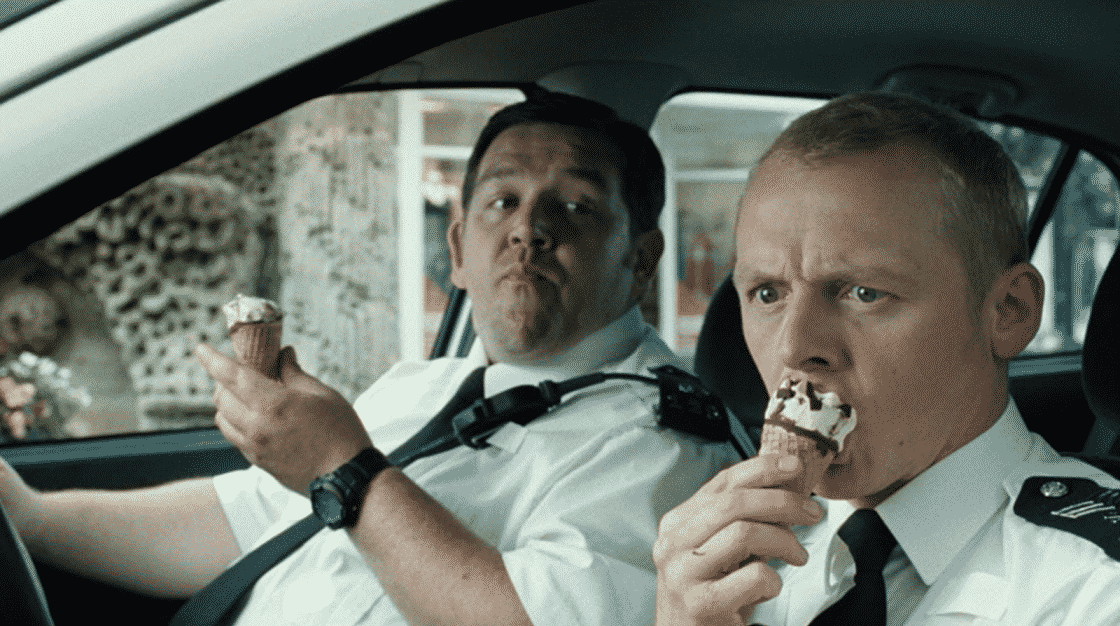 Hot Fuzz’s method of hiding music within the film would be done differently through the actions of the characters or the camera movement done by Wright. Starting at minute one, Nicholas Angel (Pegg) makes a dramatic entrance by simply walking toward the camera. With every step he makes, the sound gets louder as he draws closer and his steps go to a beat that cues the character’s police background; almost giving you the hidden thunderous nature of Nicholas Angel.

One of the subliminal examples of Wright’s direction conveying a hidden musical was during a particular scene transition. As Angel lies in his hotel bed going over his first day at his new post, the camera drops slowly down, and the tune goes into a dream state. The transition continues with Angel meeting all the members of N.W.A (not Dr. Dre, Eazy-E, Ice Cube group — that would’ve put the film on another level). As the camera floats around, the dream-like effect continues and once we get to the round table scene with the members, the music changes to a stern style, matching the camera’s new course of movement.

Like the rapid succession of the cutaways in certain parts of the film, many of the character’s actions follow a fast-paced rhythm that falls in line with drum and bass music. So, let’s run through the next examples real quick, and make sure to set your brain in fast forward mode.

Angel takes public transportation to Sandford, Gloucestershire. Each moment cuts into the next as the landscape turns more country. He meets the team in mind-reeling succession, fights hard to keep his work ethic intact, and discovers the true reason why so many weird things are happening in town. An accident from nearer the beginning of the film is revealed to have a bigger part in the grand scheme of things, the result being a series of quick cuts of Angel and the team loading weapons in musical haste as they ready for battle and of course to “PUNCH THAT SHIT!”

Lastly – and I swear we are close to the end – the last entry, The World’s End, changed it up by having more of a dance choreography in the fight scenes in the story. You almost see the “1, 2, 3” dance steps played out as the gang battled the Blanks. The punches, kicks, body slams, and elbow drops matched perfectly with the fast-paced chamber orchestra and hip-hop jams that gave the scenes more of a dramatic flair and excitement.

Exhausting, right? I know. Just be glad I’m the one who obsessed over this to the point that I had to go through these movies multiple times to catch these examples, so I’ve done all the work. You should see the map I laid out on my bedroom wall for this theory. No cause for concern…

So now that I’ve twisted your perspective on Edgar Wright’s movies, maybe you’ll be able to hear the nonstop strings of music the director gives his films. Good luck trying to make it stop.

As you watch Baby Driver, you’ll be cursing my name as you connect all the dots on the why’s and how’s of his directing style