The Room’s Tommy Wiseau was in the news quite a bit this past week, as James Franco is playing the actor in an upcoming film called The Disaster Artist.

What you might be unaware of, however, is that there was a documentary made about The Room’s Tommy Wiseau called Room Full of Spoons.

Apparently, Wiseau isn’t too happy about the documentary being out there or being screened.

Back in September, The Sydney Underground Film Festival learned that the hard way, after a series of threatening legal letters from Wiseau’s legal camp.

The festival had this to say:

If we did pull the documentary, there would be a kind of irony to it as over the last 10 years we have taken pride in screening content that was seditious, political, profane, defamatory and at times illegal and still manage to cleverly manipulate the system to our audience’s advantage… Yet it will be the man with the reputation as the world’s worst filmmaker that manages to censor our festival for the first time.

This, however, wasn’t the only screening Wiseau tried to stop.

It was set to screen at The 2016 Cinedelphia Film Festival in Philadelphia, but according to Festival Director Eric Bresler, it didn’t happen

“I received an e-mail from ‘Raul, Administrator, Wiseau-Films,’. It contained lots of broken sentences and cut-and-pasted legal nonsense that meant nothing, a lot of the legal stuff referred to Canadian policies for some reason.”

Director of the documentary, Rick Harper was quick to defend his film:

We were very careful about adhering the fair use guidelines when selecting clips from The Roomto use in Room Full of Spoons. Everything used in the doc is in reference to things explained by the interview subjects. But no matter how I try to explain this to Tommy, he’s not having it. He’s had lawyers in the US, Canada and Australia threaten us with copyright infringement and even though he’d likely lose if it ever went to court, I’m sure his lawyers are all too happy to take his money in the meantime.

He also had this to say:

Tommy and I kinda hit it off; Tommy loves being praised and I was a huge fan of his movie and was totally geeked-out to be hanging with him so we were a match made in heaven. I always wanted to make a movie so it made sense to combine my love for The Room with my filmmaking aspirations. I pitched the documentary idea to Tommy and he loved it… at first. After a few months of going back and forth with Tommy it became clear that he was more interested in getting me to sell DVD’s and T-shirts in Canada and the doc was no longer on his radar.

Tommy first started campaigning against Room Full Of Spoons during our Kickstarter. He has this idea that we’re profiting from his movie when in reality we put over $100,000 of our own money into making Room Full Of Spoons and worked for free for almost 4 years before asking the fans for any help. Shortly after it’s completion we made the mistake of letting Tommy see the movie and he was upset that we found out his real name, age and went to his home town. The whole thing is done very tastefully and certainly isn’t the focus of the film, but he decided he didn’t want anyone to see it.

So far he’s stopped at least a dozen venues from screening Room Full of Spoons citing everything from copyright infringement, illegally downloaded material to wiretapping and defamation of character… It’s all bullshit of course but I can’t blame programmers from being afraid to screen my film… These are scary claims.

The filmmaker also knocked Wiseau in his last quote:

Tommy and I have had numerous phone conversations and exchanged hundreds of emails but it’s like trying to negotiate with a child. We’ve even attempted to mediate through our lawyers and had a tentative agreement at one point and at the last minute he requested we make an additional 27 cuts to the film. It came to a point where I could sense that even Tommy’s lawyer was starting to get uncomfortable with his ridiculous demands and I realized it was a waste of time. Tommy Wiseau isn’t exactly known as the worlds greatest filmmaker, I certainly wasn’t about to give him the final cut rights to my movie.

Now, when you go to the documentary’s website, this message pops up:

You’re likely wondering why you haven’t received any shipment notifications for your pre-order of the documentary, Room Full of Spoons…

As of June 14th, 2017, we have been under a Court Ordered injunction preventing us from doing so, as well as exhibiting or otherwise releasing the film.

At this time, that is all any of us can say. We apologize for not being able to reply to any of your messages in the last few weeks, we needed to clarify with the judge the restrictions of the Court Order.

As soon as there is an update to the situation, we will inform you here and on our various social media platforms.

Thank you for your ongoing support,
Room Full of Spoons team

Where this gets even more interesting, is the information from the court case itself that we have obtained from a source close to the situation:

In 2011, Mr. Wiseau was approached by Mr. Harper and Mr. Forero McGrath, who claimed to be fans of The Room, at a promotional event in Ottawa.

At the Toronto meeting, Mr. Wiseau agreed to work with the Defendants, relying on the undertaking and representations made by Mr. Harper that he would portray Mr. Wiseau in a positive light and the documentary would be about the fans of The Room.

Mr. Wiseau advised the Defendants that his involvement and authorization would be subject to his approval of how The Room and he were presented, what and how much of the Plantiffs’ works, particularly The Room, would be included in the documentary, and that then a license agreement would have to be reached. Mr. Wiseau also required that he have approval of the final product.

Mr. Harper agreed to these terms at the meeting, and consequently Mr. Wiseau allowed the Defendedants to film him privately for use in the documentary, as well as during various promotional events, including screenings of The Room in Toronto and New York City in 2011.

In early 2015, Mr. Wiseau discovered that the Defendants started a Kickstarter campaign to raise funds for their documentary, which they called “Room Full of Spoons”. As part of the fundraising campaign that ran from February 20 to March 22, 2015, the Defendants used Mr. Wiseau’s image and copyrighted material from The Room to solicit funds.

Mr. Wiseau requested that the Defendants take down his images and remove the Plantiffs copyrighted content from the Kickstarter page.

On March 4th, 2015, Mr. Harper emailed an employee of Wiseau-Films requesting clips from The Room to use in the documentary and misrepresented to the Plantiffs that he and the other Defendants would respect Mr. Wiseau’s private life in order to try to secure a licence for the Plantiffs’ works.

The Kickstarter campaign ultimately had 476 backers who pledged at least $26,101.

The Plantiffs, unaware of the Defendants’ true intentions and activities, engaged in licencing discussions with them, and an agreement in principle was reached. However, instead of executing the agreement, the Defendants ended communication and used the Plantiffs’ works without consent.

In early 2016, Mr. Wiseau learned that the Defendants had completed Room Full of Spoons and without the Plantiffs’ authorization, were attempting to screen it. The plantiffs objected to the Defendants and the theatres they knew of that were to screen the documentary. Proposed screenings in Philiadelphia, Australia, The United Kingdom, and Ottawa were cancelled as a result.

The case goes onto say that upon screening Room Full Of Spoons, Wiseau thought that it mocked The Room and made false claims about Wiseau’s private life and the creation of The Room.

After they allegedly expressed their displeasure, the Defendants publicly announced they intended to release Room Full of Spoons direct to the public on June 1, 2017.

Despite Wiseau’s team warning them not to do so, the filmmakers screened the documentary to a theater of about 20 people and solicited donations at Cinecycle Theater in Toronto. 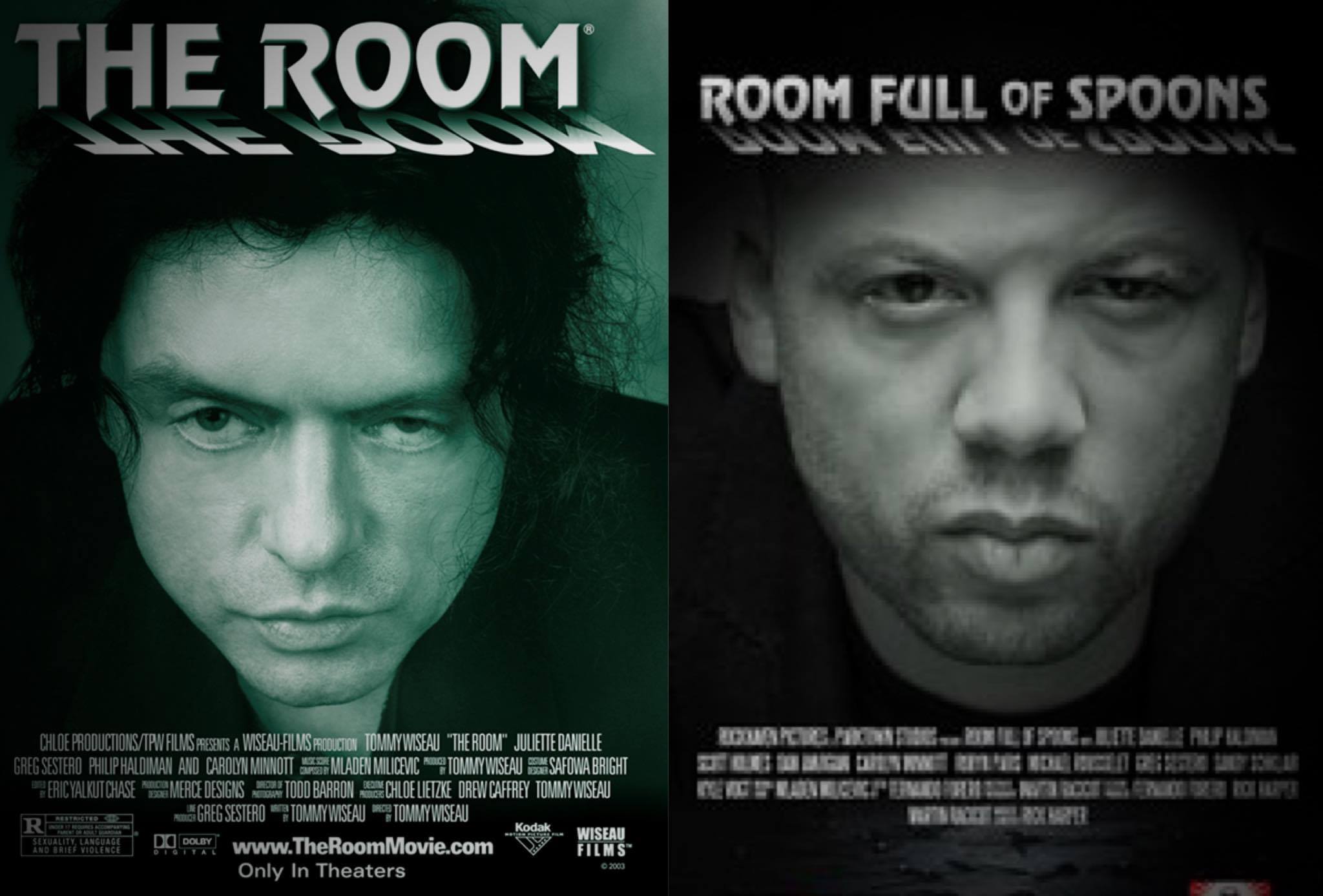 Wiseau claims that the documentary features more than 7 minutes of his work and other copywritten materials.

Wiseau also was allegedly promised the final say over the documentary.

Basically, what this boils down to, is that Wiseau believes that if the documentary is released, it will tell the general public that he approved in its creation – and he doesn’t want them profiting off of that.

How this will all turn out in the end, we wouldn’t have a clue. We’ll keep you posted, though.