Making A Case For ‘Star Wars: Episode I – The Phantom Menace’ 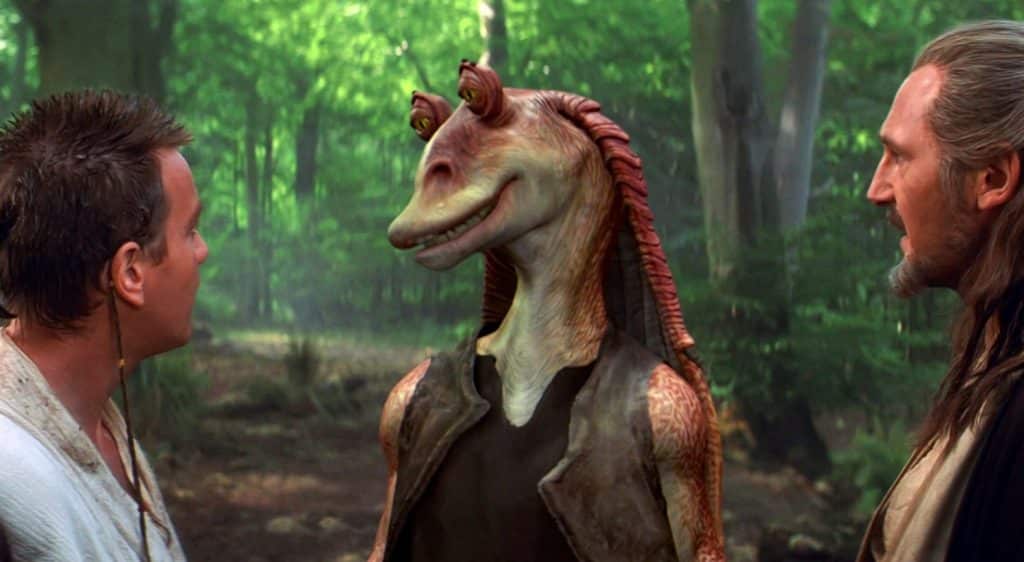 Everyone and their grandma despises the Star Wars prequels. In what equated to a big waste of potential, George Lucas soullessly cashed in on the brand’s popularity with a series of films that are still maligned today. The prequel that has gotten it the worst of all is The Phantom Menace, which was one of the most hyped releases arguably ever back in 1999.

Star Wars is perhaps the most beloved blockbuster brand of all time, with its recent return in 2015 with The Force Awakens delivering joy to critics and fans alike. The brand’s importance though makes failures all the more noticeable.

I get that George Lucas ruined a lot of people’s childhood and Phantom Menace is far from a perfect film, but I do have to say its the prequel that I enjoy the most, and would even say I like it *cue tomato throwing*.

Yes, even through Jake Lloyd and a heaping of political talk that would put even congress to sleep, The Phantom Menace is the only prequel to capture the adventure-essence of the original trilogy, while providing some uneven entertainment along the way.

From the get to go, I dig the opening of this film a lot. It starts out in the kind of mysterious way one would expect a Star Wars film to, as we follow Jedi Master Qui-Gon Jinn and his padiwan Obi-Wan Kenobi entering a ship for trade disputes. When negotiations quickly go awry and the action starts, the movie sets into gear with a satisfying set piece. Between the swelling of classic Star Wars score and swashbuckling action, its the perfect way to open the film on a fun note. The set piece also features some great balance between digital and practical effects as the film in general avoids the effects-heavy backdrops the plague the follow-ups.

Then we get into the politic talk, which I will admit is incredibly dense and is in desperate need of some personality. The prequels in general lack the swagger or emotion that made the original trilogy special. At the same token, it did not really bother me that much. While the minutia of the narrative is silly, the story for the most part is engaging, introducing a lot of interesting new aspects and areas of interest.

As Qui-Gon and Obi-Wan land on Naboo, we have another fun sequences of the two escaping through a forrest land. Here is where we are introduced to Jar Jar Binks, who is sure to win any poll of “worst Star Wars character”. This is an aspect of the film I would never try to defend, as the character’s irritating jib-jab and dated CGI look is painful. 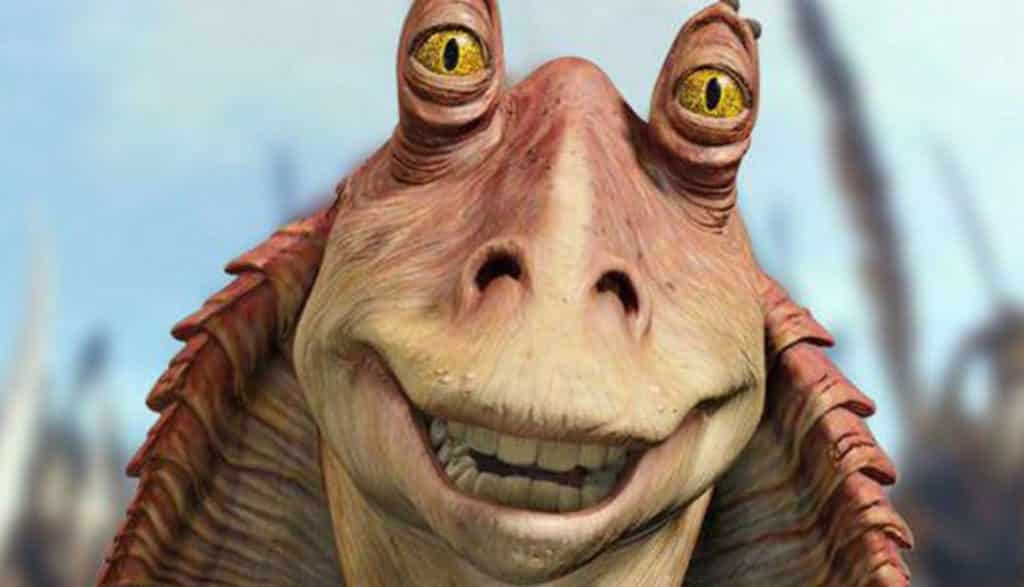 At the same time, I think a lot of people overstate the presence he has in the film. In a film that is largely an ensemble effort, Jar-Jar is rarely the focus of any scene and is often relegated to just saying a dumb line or two in the background. Is Jar Jar bad? Of course, but bad enough to break this film is a bit harsh. That would be like saying The Fifth Element sucks because you don’t like Chris Tucker.

The adventure continues as our trio venture under water to the Gungan’s base of operations, which again is another fun sequence (noticing a trend). The dialogue between Gungan leader Boss Nass and the jedis isn’t the most compelling, but it does help further set up the interesting web of factions involved. Lucas certainly isn’t a good screenwriter, but I’ll give him credit for putting some work into developing the factions. Either way, the movie brisks through the sequence to another set piece that it isn’t too much of an issue if it bores you.

The Phantom Menace in a lot of ways harkens to more like a roller coaster ride and less like a Star Wars film. The first 20 minutes alone features four action scenes that take place in four different locations. The pace is frantic, but I’d be lying if I said the film didn’t whisk me along way with it. It helps a lot that the setpieces in the film are terrific, offering a fun variety of sequences while being spread out enough throughout the film to not be too bombastic.

After the frenetic start, the film slows down as our rag-tag crew land on Tatooine. Again, this is where some problems arise, as the film’s script doesn’t really know what do with these characters. Instead of trying to develop them, we have scenes of silly banter and not much going on. This would have been an opportune time to give the characters some sense of personality, but Lucas’ ability as a writer is lacking in that department.

In between this comes the introduction of a mysteriously cloaked villain, who is later known as Darth Maul. Aside form his unceremonious death, Lucas uses Maul to perfection, acting as a foreboding presence throughout the film. Everything from his look to Ray Park’s performance as the character truly brings him to life, and it’s the reason why the character has lasted in fans hearts for awhile.

Soon after another character is introduced, this time a character that is despised by most. Young Anakin Skywalker, brought to the screen by much-maligned child actor Jake Lloyd. Lloyd’s delivery is not great, but its hard to beat him up too much when much of the dialogue he’s reading throughout the film falls flat. At the same token, I enjoyed his maternal and eventually paternal relationships with his mom and Qui-Gon, with both Pernilla August and Liam Neeson making this dialogue scenes work. August in particular is great at doing a lot with a little, capturing the anguish of Anakin’s mom as her only son is set to fulfill a greater destiny.

Thankfully this flawed sequence doesn’t last too long, and I would say that this film’s pace in general does act like band-aid to a lot of the films problems. The pod racing scene is essentially the halfway mark of the film, and the sequence is still enthralling. The film builds up to the sequence nicely, so by the time it hits I am always at the edge of my seat. Lucas certainly knows how to shoot action, and I also think the sound during these sequence really pops, putting the audience alongside Anakin during the race.

The film then enters a formula of exposition action then exposition as it builds to the final conclusion. The first time we see Darth Maul in combat with Qui-Gon is terrific, and I love the overhead shot as we see Qui-Gon barely escape. Again, it’s a great foreshadow to what is it to come. I would say the period after that is where the film lags the most, as similar to the Tatooine sequence, the audience is suffocated by exposition after exposition without much in terms of character development. In these moments is where Natalie Portman’s Queen Amidala strikes a friendship with Anakin, which easily makes for some of the worst dialogue I’ve ever seen. This sparring moments are rough to sit through and often leave me questioning why I like this movie.

Yet, Lucas does save his best for last, with the final confrontation featuring the classic Return of the Jedi structure, following three different storylines happening simultaneously. It’s the action scenes in which this film actually feels like a Star Wars film, which is both a positive and a negative inditement of Lucas’ writing. The editing of these three sequences together are impressive, and the mini-cliffhangers between them do build up the intensity.

The best of them all is the Dual of Fates lightsaber duel between Obi-Wan, Qui-Gon, and Darth Maul. This may not be the best Star Wars lightsaber fight, but its certainly the most impressively coordinated. Drifting from the main palace to an interestingly designed central core room, the moment gets across an impressive scale while still capturing the intimacy of the fight. More impressively, the setpiece still holds up today, and I still jump everytime Obi-Wan backflips over Darth Maul for the kill.

After a parade wraps everything in a nice bow, we come to our conclusion. What to make of all these Phantom Menace thoughts? Well the film is poorly written and lacks personality, but I think the movie is fairly entertaining throughout most of its duration. Lucas’ ability to create new universes and shoot dazzling action is on full-display, and while the performances aren’t great, I would say the actors add much-needed credibility to their roles. It’s an empty film, but like a roller-coaster, it has thrills and fun along the way.

Even if you hate The Phantom Menace, I do have to say I think its by far the best prequel because it doesn’t take itself so seriously. Bad aspects like poor dialogue and wooden performances are far more noticeable in a movie that is trying to have real dramatic impact rather than a more mindless adventure. This is especially problematic in Revenge of the Sith, which still to this day makes me laugh and cringe due to Hayden Christensen’s performance.

Either way, the prequels are a huge a mess, and I am glad to see that the Star Wars brand is back to being recognized with great movies. That being said, I will always have a soft spot for The Phantom Menace, and while I know this article likely didn’t convert many, I hope people at least are a bit more gentle to the film compared to the other prequels.