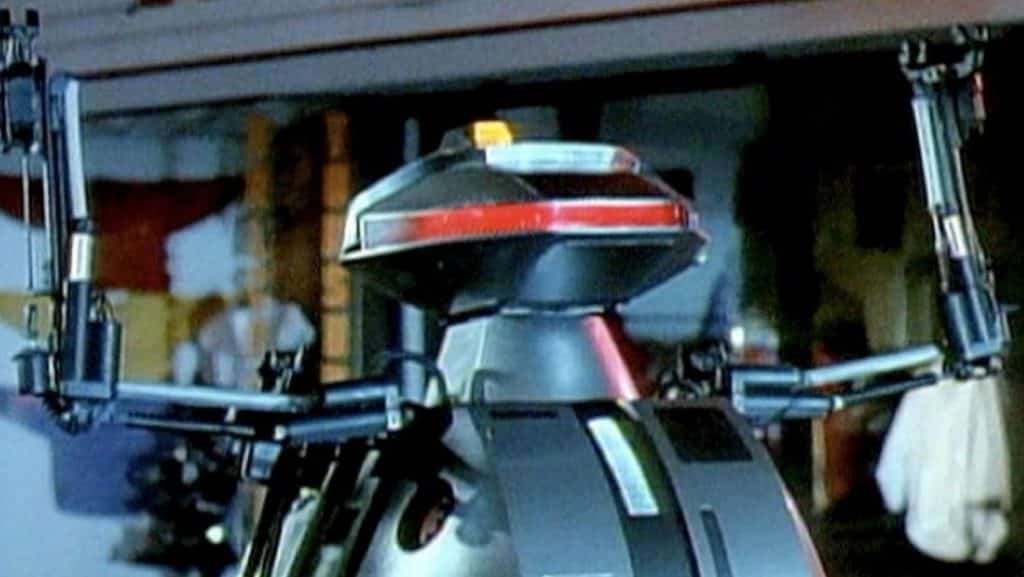 We live in a time where studios want to pump out remakes in an attempt to receive brand recognition and thus more profit. It seems especially popular to do this with horror titles, as horror fans after all tend to be very supportive for their beloved franchises. A few cult classics have evaded this treatment, but now it seems like 1980’s fan-favorite Chopping Mall might be the next film to get remade. Sort of.

According to Robert Green Hall, who is set to write and direct the remake, the movie will not even bear a passing resemblance to the original. The only connection will be the setting, as he explained to Nightmare Toys last week.

“My version of CHOPPING MALL that I wrote is totally supernatural,” Hall revealed. “It’s more The Fog set in an abandoned mall than it is robots. Instead of killer robots, they are these mannequins that are possessed by the souls of dead slaves that worked at the plantation that the mall was built over.”

“Sorry guys… purists. I have a different take. Which [Roger Corman] really, really liked. Do need to get that underway.”

He’s essentially saying it’s more like The Fog than Chopping Mall, so why call it Chopping Mall at all then? It’s just a tactic to manipulate existing fans into seeing an unrelated film, and probably a way he can sell it to investors for funding. It’s truly a waste of potential because we live in such a technologically-focused time period. In a world with smartphones, smart speakers, smart cars, and smart anything else; why get rid of the technology angle?

If robots are too silly, fine, I can understand that. But don’t create some convoluted plot with Native Americans incoherently possessing mannequins and act like that’s less silly. It would be much more relevant, and perhaps even “less silly”, to create a film based around the concept of a smart mall. That’s right, make the mall the literal antagonist! It already sounds better than possessed mannequins.

But be careful about feeling opinionated when it comes to this remake – because the writer/director doesn’t care what you think! As you can see from some of the Facebook posts below, and yes he runs this page, he has no respect for fans (or any concept of grammar). 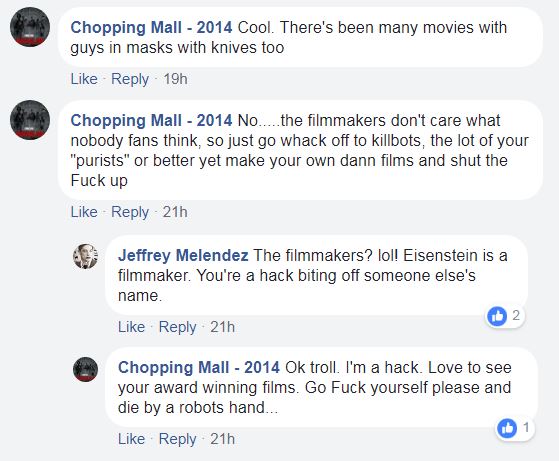 It’s almost sickening. I can handle an unrelated remake, sure, but publicly insulting the film you’re cashing in on and insulting the fans for being upset? That’s a little too much. After we posted the article, this happened:

The odds are that this film will never get off the ground, with its ridiculous premise, the rights shifting between owners, and a budget it cannot acquire – so let’s hope it stays that way. Maybe one day someone respectful can get ahold of the property and give us a remake or sequel worthy of the title Chopping Mall. Until then, “Have a nice day.” There’s also a movement to stop the remake that has been started.

Continue Reading
You may also like...
Related Topics:Chopping Mall, Horror