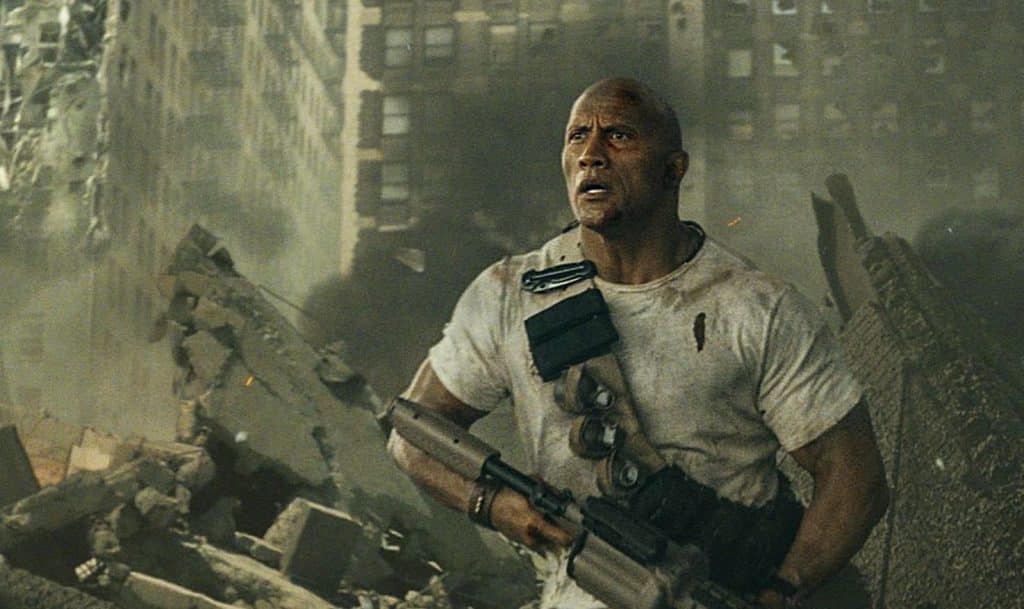 Rampage was never trying to win an Oscar or be the next best movie. If you’re familiar with the game itself, you probably already knew this when the movie was announced. It was just going to be another dumb fun action movie – and that’s apparently what it is, according to the reviews for the film. At the time of writing this article, the Dwayne Johnson film sits at 49% on Rotten Tomatoes, with a near even split of “fresh” and “rotten reviews”.

Critics Consensus: Rampage isn’t as fun as its source material, but the movie’s sheer button-mashing abandon might satisfy audiences in the mood for a brainless blockbuster.

Here are some of the reviews:

Bloody-Disgusting: Between top-notch visual effects and the only man charismatic enough to dwarf three giant mutated animals, Rampage provides enough destruction to give audiences their money’s worth even if afterward they’ll feel as leveled as the cities on screen.

Birth.Movies.Death: Rampage offers a good amount of old-fashioned giant-monster entertainment and just enough heart to give it a spine.

The List: Splendidly silly in places, with its fondness for giant monster movies obvious, this popcorn extravaganza swerves haphazardly between knowing humour and a heartfelt warning about the plague of capitalism…

Boston Globe: The engaging dynamic between our hero and his gargantuan, computer-generated pal is the movie’s best surprise, with silly and straight bits both working mostly as intended for director Brad Peyton.

We Live Entertainment: Rampage is meant to be big and dumb. It’s non-stop campy fun that is as simplistic as the video game that it is based on.

Nerdist: Rampage is exactly the kind of knowingly ridiculous blockbuster spectacle we were hoping to get.

Screen Rant: Rampage doesn’t blend action, comedy, and heart as well as The Rock’s best tentpoles, but there’s good dunderheaded fun to be had here.

Empire: Ridiculous, of course, but not as ridiculous as it might have been.

Washington Post: At times, Rampage almost hides its problems. It’s just funny enough, just exciting enough and just visually impressive enough. What it never is, though, is anything more than just enough.

Consequence of Sound: Rampage makes vigorous use of all of Johnson’s attributes, being that it’s somehow one of the most ridiculous films in which he’s starred to date.

Flickering Myth: The filmmakers appear to be staunchly against embracing what Rampage is until the final 40 minutes; anyone that has ever played a Rampage game is going to smile a lot watching Chicago get leveled.

US Weekly: No animals were harmed during the making of this film. Humans that sit through it, however, may suffer from destruction-porn fatigue, bouts of confusion and frustration, and a mild case of the giggles.

IndieWire: No satisfying action beats, no memorable images, and so little to say that it’s virtually impossible to say anything about it in return. It’s not a movie for critics, that much is clear. The problem is that it’s not for anyone else, either.

IGN: Rampage is utterly ridiculous, campy, yet also self-aware enough to be kinda sorta dumb fun. … But even The Rock can only do so much when a movie’s this absurd.

The Wrap: This film is based on an arcade video game that featured large-sized creatures knocking down buildings and running amok, but that basic idea has been swamped here by too many convoluted plot lines and extraneous characters.

EW: I honestly want to be a Dwayne Johnson fan, but the guy doesn’t make it easy.

So there you have it. Pretty divided. If you’re interested in seeing the movie, you’re probably going to see it regardless of what a few reviewers think. So do it, and be sure to have fun when you do.

Are you looking foward to Rampage? Be sure to tell us your thoughts in the comments!

Continue Reading
You may also like...
Related Topics:Dwayne johnson, Rampage, The Rock