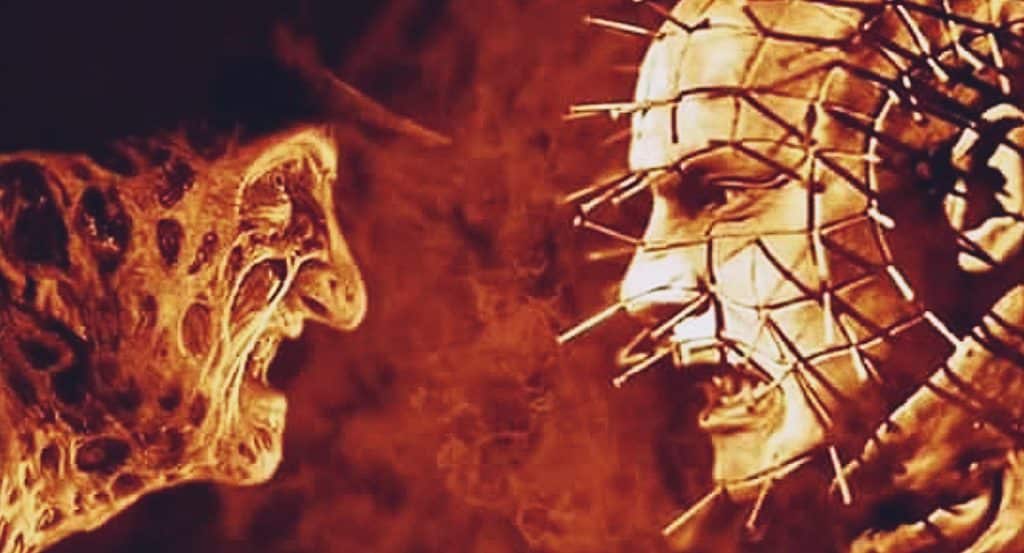 Crossovers of cinematic universes are all the rage right now, especially with the 10 year build-up of Avengers: Infinity War being a accolade within itself in film history. However, there was a time when these sort of realities were very far and few in between, and horror was the bigger market for this with the likes of Alien vs. Predator and Freddy vs. Jason. That doesn’t stop our fantasy ideas to wanting to see some hint of reality in the form of fan creations, and one in particular pits Freddy Krueger against Pinhead, in Freddy vs. Pinhead.

Stryder HD took it to YouTube to make a classic rendition of a pretty well-spliced trailer for the likes of the Hell Priest and the Springwood Slasher. Obviously with a lot of the differences in sets, it would be hard to accomplish this sort of thing but Stryder made it sound like the narrative had a coherent pace. Who wouldn’t want to see a film where Freddy escapes the Cenobites and hides within the dreams of the children of Elm Street?

Speaking of crossovers, there was one that would have been made in the similar manner of Jason Goes To Hell: The Final Friday with the Freddy glove. When we spoke to Hellraiser: Judgment director Gary J. Tunnicliffe a couple months back, he mentioned his original Hellraiser fan film No More Souls would have had another slasher icon in mind:

“I was just going to do a shot of Pinhead kind of watching him, and then the camera would pan up and you’d see a character chained up, but he was masking him so you couldn’t see the figure that was chained up. All you’d see is the hands lifted up from the chains, and I was going to have Pinhead turn around and walk away and it was going to be Michael Myers chained up by Pinhead.”

And wouldn’t you know it with the build-up of Jason Goes To Hell, it ended up making the box office hit that would be Freddy vs. Jason, in which was very enjoyable to us all, including Tunnicliffe himself. It should probably follow suit with the success and have Pinhead in something too, no? In the grand scheme of things however, it does make things pretty convoluted for a story perspective, as Tunnicliffe would put it.

“…it would be very nice just to see Pinhead standing in a room with Freddy and Jason, would be a t-shirt dream come true, a t-shirt come to life, but it would be tricky as a story, I think.”

“You have to have a believable conflict and they’re all from three different universes, really. With different realities. What is the thing they would have in common, that they all three are after some sort of power over the other?”

Tunnicliffe did however say that the interest would definitely be there:

“But here’s the deal: if anyone’s got 15 million dollars and the rights and they want to write/direct it, then I’m in and ’m happy to try and figure it out for you!. I’d throw Hello Kitty in there if they gave me the money, trust me.”

That might be hard to do with classic renditions with all the old school films being subject to remakes, and some not very well organized themselves outside of a money statistic. Actor Thomas Dekker spoke of this experience on the remake of Nightmare on Elm Street:

“The unfortunate part is if it had been an independent film, sort of inspired by “Nightmare on Elm Street“, I think it could have been something really special, but in order to afford that brand, then you have to cater to the lowest common denominator, and that’s what happens with these remakes. You’re not allowed the privilege of originality if you’re not coming up with an original idea.”

Perhaps one day we can get these films done right and with a reality for the horror and gore lover. In the meantime, we have the MCU films to look up to and…well, the Dark Universe – however it plans to unfold.