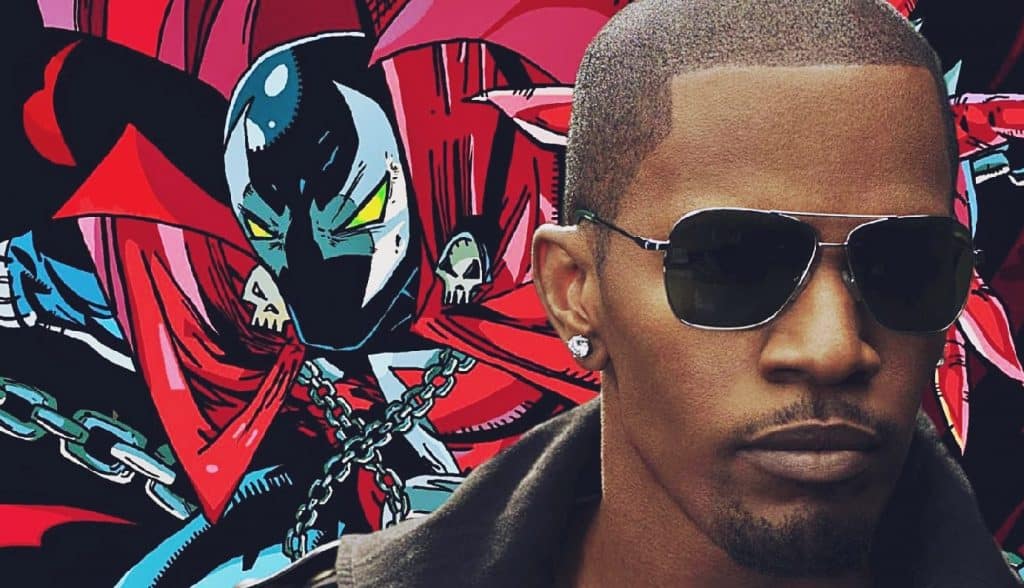 It was rumored last month that Jamie Foxx was being pursued to play Spawn in Todd McFarlane‘s upcoming reboot, and it turns out those rumors are true, as it has now been confirmed. Though it’s been said that the role won’t feature much talking from the lead character, the casting has been something we’ve heard could happen for years now.

Jamie Foxx is set to star in Spawn, the Blumhouse film that marks the directorial debut of Todd McFarlane from his scripted adaptation of his comic book creation. Foxx will play the character who started out in the comics as Al Simmons, a member of a CIA black ops team who is betrayed twice. After being set up by his cohorts to be murdered with his corpse set aflame, Newman is double crossed in Hell.

He is convinced to become a Hellspawn warrior in exchange for being able to be reunited with his wife. But Spawn finds himself stuck in a demonic creature shell, and that his wife moved on and married his best friend. So this is one pissed-off antihero who attends to dispatching the scum of the city in good and evil battles that encompass Earth, Heaven and Hell.

When speaking about the film, McFarlane said:

“The scariest movies, from Jaws to John Carpenter’s The Thing, or The Grudge and The Ring, the boogeyman doesn’t talk. It confuses people because of the comic book industry, and because they all default into their Captain America mindset and I keep saying, no, get into John Carpenter’s mindset or Hitchcock. This is not a man in a rubber suit, it’s not a hero that’s going to come and save the damsel. It’s none of that. At the end of the movie, I’m hoping that the audience will say either, is this a ghost that turns into a man, or is it a man that turns into a ghost? I’ve got a trilogy in mind here, and I’m not inclined in this first movie to do an origin story. I’m mentally exhausted from origin stories.

Luckily, there’s a movie that just came out that helps my cause. In A Quiet Place, the first thing on screen is a card in black and white letters that says Day 89. It doesn’t care about what happened in those first 88 days. There are a couple headlines, but then we are on day 450. That movie doesn’t worry about explaining and giving all the answers. What it said in that case was, if you can hang on for a story of survival of this family, this movie will make complete sense for you.”

“We are thrilled Jamie Foxx will be playing the title role in our movie adaptation of Spawn,” he said in a statement. “He is an incredible actor and a huge fan of the Spawn Universe that Todd McFarlane created. With the depth of talent Jamie can commit to the role and Todd at the helm bringing the world of Spawn to life, we could not be more excited for this film.”

“A few years back I flew out to Arizona to meet the man behind one of the most incredible comic book characters in the universe… Todd McFarlane. He was taken aback when I told him with the enthusiasm of a young child that more than anything I wanted to put my name in the hat to embody his beloved character Spawn…. I told him no one would work harder than me if given the opportunity… well… the opportunity is here!! I’m humbled and ready to transform… and to top things off the young Jason Blum is lending his brilliance to the project! Time to be great!!!! #Spawn.”

The movie is expected to be released at some point next year.

What do you think of this casting decision? Are you excited for the new Spawn movie? Be sure to tell us your thoughts in the comments down below!