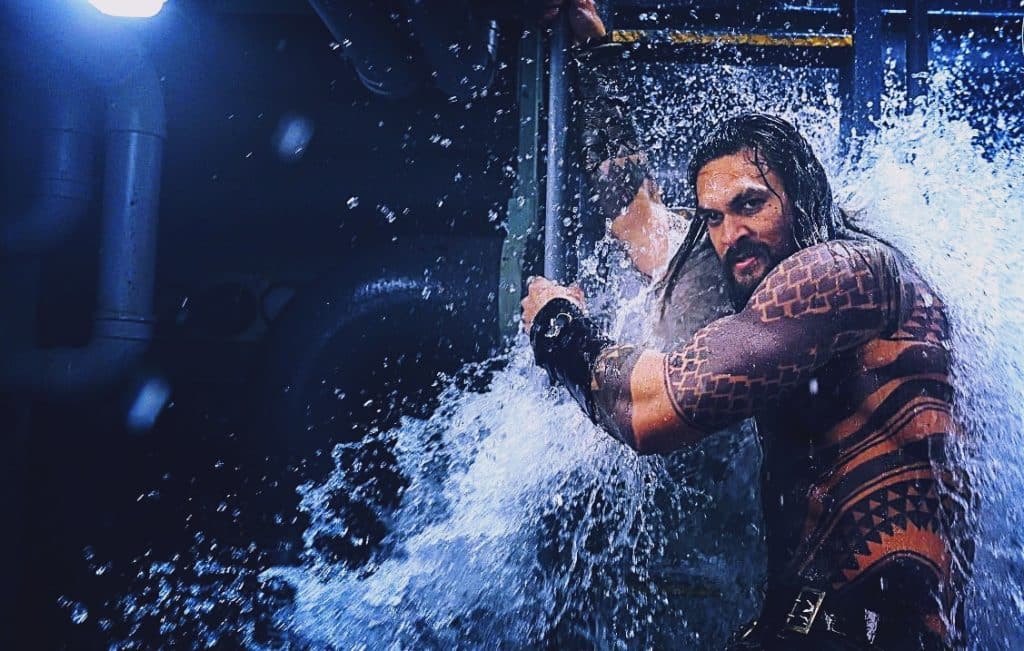 The DCEU‘s next entry, Aquaman, has been making waves this week (Heh!) after debuting its first footage at CineEurope. Luckily for those of us who couldn’t make it, Entertainment Weekly has us covered, releasing several images giving us our first look at the character and many of his supporting characters.

The first image features Jason Momoa‘s titular hero entering a submarine that looks to be taking on a lot of water after being attacked by Pirates. Rumors have speculated that this could be the first time that Arthur runs into Yahya Abdul-Mateen II’s Black Manta. Speaking of which…

The next image gives us our first look at the aquatic villain making some adjustments to his classic helmet, which honestly looks like it was ripped straight out of the comics. It’s definitely going to be interesting to see him in action this December.

Mera made her live action debut back in Justice League last year, although in a much smaller role than what we were expecting. Thankfully we will be seeing a lot more of Amber Heard in the role, as this image reveals she will also be spending time with Arthur on the surface.

Patrick Wilson is no stranger to Comic Book roles, having played Nite Owl in Zack Snyder‘s Watchmen. This time however he will be playing a villain, portraying Aquaman’s half brother Orm, otherwise known as Ocean Master. Here we can see him squaring off with our hero.

Whilst Amber Heard made the finished Justice League film, Willem Dafoe wasn’t so lucky with this role hitting the cutting room floor. This behind the scenes image gives us a look at him in character as Vulko, conversing with Momoa’s, Heard and the film’s director James Wan on a stunning underwater set.

If you didn’t know how badass the Atlantean’s were, this image will certainly show it! This one features the Atlantean army going to battle with the Kingdom of Xebel on freaking SHARKS! How awesome is that?!

The Queen of Atlantis and her Prince! #Aquaman pic.twitter.com/JYBcSv6xnk

Finally, we get a look at Nicole Kidman‘s Queen Atlanna in a scene which looks to involve a young Arthur Curry and his father, Thomas, who is set to be played by Temuera Morrison.

Overall, these image sshow that despite its many flaws, the DCEU still has potential. Let’s just hope that it lives up to it when it hits theaters on December 21st.

What do you think? Are you excited for this movie? What are you most anticipating? Let us know below.