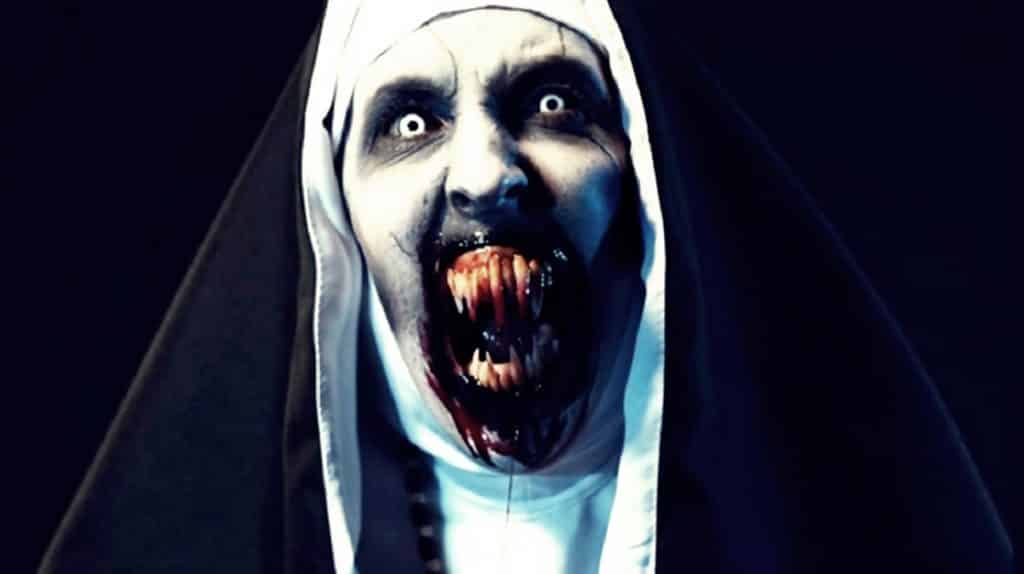 Last night was San Diego Comic Con’s annual Scare Diego night and attendees got some information and exclusive clips from the latest installment of The Conjuring universe. James Wan, Gary Dauberman, Corin Hardy, and actresses  Taissa Farmiga and Ingrid Bisu took to the stage during the panel to discuss the making of The Nun.

New line premiered some key scenes of the movie, which is to be considered the birth of The Conjuring universe. The footage shown featured a man being buried alive, a nun hanging herself following being haunted by the movie’s title character and a snake slithering out of a kids mouth. Not to forget all of the frightened nuns and inverted crosses.

A discussion about the making of the movie followed the clips, including details about the filming of it being in castles and villages in Romania. Then an extended trailer for the movie was played and Corin Hardy brought out a little nun doll. For a nice little touch at the end, as the lights came up a group of nuns were stood around the room.

Saw a bunch of scenes from #TheNun and of course it looks creepy as hell, although it’s almost too easy, y’know? Why wouldn’t you be freaked out with that? Then, they brought the lights up… #ScareDiego @joblocom pic.twitter.com/sBwsZnFTJB

We were also given a poster which shows a picture of Taissa Farmiga’s character in front being burned to reveal The Nun herself behind. The contrast of light and dark on the poster gives a good, aesthetically pleasing effect. We can assume from the poster that Farmiga’s character may go on to become The Nun, somehow, but that’s just speculation.

Check out the new poster for #TheNun, in theaters September 7. pic.twitter.com/NBeJHWiZqE

The official synopsis for The Nun reads:

You can see the origins of The Conjuring franchise when The Nun comes to theaters on September 7, 2018.

What are your thoughts on the panel? Tell us in the comments!