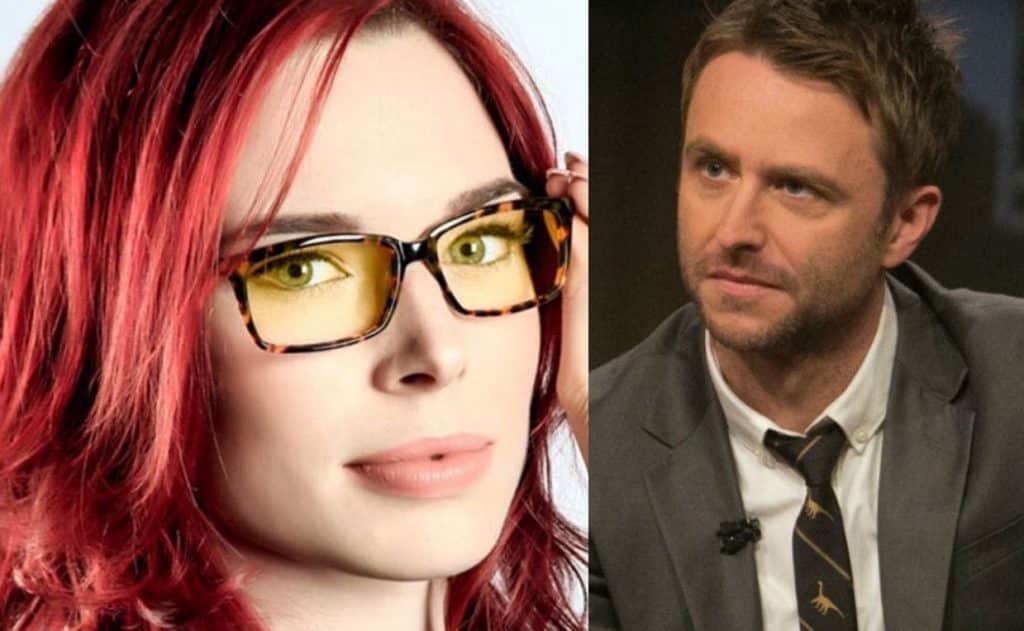 Chris Hardwick was removed from his popular Talking Dead (otherwise known as Talking with Chris Hardwick) after his ex-girlfriend, Chloe Dykstra, posted an article on Medium detailing alleged sexual and physical abuse from Hardwick. After holes in her story were seemingly uncovered (she posted different accounts of it on Reddit), some on the internet began to believe that the article was more of a hit piece to get back at Hardwick for leaving her after he found out she cheated on him. There were also leaked text messages that made people think differently about the initial story.

Whether or not that’s the case at all, we will never know. At this point, it seems to be a he said/she said case, and after conducting an investigation, AMC viewed the accusations weren’t enough to fire Hardwick and now he’s been reinstated as the host of the show.

After the re-hiring was announced, Dykstra posted this tweet:

Followed by an actual statement:

I originally wrote my essay so I could move on with my life, and now I intend to do so. Thank you, again, to those who have supported me during this. pic.twitter.com/sjBEKGpY7v

It’s interesting that she decided not to participate in the investigation, but her choice nonetheless. The internet was full of reactions – all of which were very strong and divisive:

you should have burned him to the ground

the death threats, the nastiness, the utter hatred you will get for daring to speak out will never ever truly stop because there are people invested in preserving the status quo of abuse and manipulation

I made peace with it. I’ve never been interested in vengeance, just closure. At this point, after everything, I just want the bullying (both of myself and others) to stop. It’s clear why people are terrified to come forward, and now I’m just hoping to return to a “normal” life.

Chris Hardwick’s name gets smeared. Almost loses his reputation, his career, his work, etc. Almost loses everything. Now, thank goodness he’s back at AMC cause her allegations have no credibility. But she gets to just “move on?”

Oh so you’re ok if your reputation is smeared due to unfounded allegations, but hey, you got your jobs back right? Damn, you’re so ignorant. Ok bye.

She CLAIMS to have audio and video but nobody’s ever heard or seen any of it. The audio and videos we HAVE seen are all of her gushing about how amazing he is…..but his supporters are the ones who are believing what we want to? Yeah. Have several seats. 👋

Why do women infantilize other women so much. It’s like there’s always an excuse given for why a woman does or doesn’t do something but for men everything is just their fault. They know better. But for women just a bunch of “reasons” for their behavior.

If you didn’t want to ruin his career then why call him out ? Sounds fishy

Glad you decided to wanted to “move on” after all these years only once he was married and at the peak of his career. You have evidence but won’t say? You sound like a lying little kid who says that have a spaceship at home but we can’t come see it.

Pretty sure abuse survivors don’t have a “best before” date, Ether.

Nice work! Now a lot of people know who Chloe Dykstra is. All it took was what amounts to vaguebooking about a popular geekculture guy (nevermind the costs), and voila! Double your exposure, double your relevance. I hope your next boyfriend googles you & treads carefully.

You threaten him at the end of your essay with evidence and then fail to supply that for the investigation????

And this is what is wrong with this movement you claim to have evidence, but refuse to cooperate. No one knew you before this everyone will forget about you after this

Remember when everyone on Twitter called Chris Hardwick a rapist because an ex girlfriend said he did stuff and then he showed proof that she wasn’t telling the truth and he still didn’t get his job back.

The Chris Hardwick situation and the reaction to it makes me ashamed of my sex. A bitter ex tried to destroy his life and reputation and most people followed it hook line and sinker

fuck chris hardwick. fuck joss whedon. fuck all the dudes who get away with it.

Investigation reveals he is innocent + 5 women come out in his defense – Twitter mob suddenly become detectives and start questioning everything. Pathetic.

I still believe Chloe Dykstra. If you don’t like it, you’re welcome to fuck yourself with a rusted pair of garden shears.

Please place directly into your ass before opening. pic.twitter.com/nas0hZ3DWU

Be sure not to use lube <3 pic.twitter.com/S4hSswlgTs

So you are going to engage in sexual harassment to prove your point on sexual misconduct?

If you’re interested in more tweets like this, just head on over to Twitter. In other news, this will probably be the last story we ever cover on this.