Every Marvel fan knows that the creative minds behind the Marvel Cinematic Universe lay the foundations and building blocks for their most spectacular plot reveals way in advance of the actual events taking place. With that truth in mind, the fact that next year’s Captain Marvel movie will feature legendary villains, The Skrulls, has got a significant part of the Marvel fan community wondering if we’ve already seen the shape-shifting bad guys in the MCU. One particular theory that’s doing the rounds st the moment is both exciting and worrisome in equal measure, and suggests that Thor may not be who he claims to be.

From Wakanda being shown on Nick Fury’s map way back in Iron Man 2, to Steven Strange being name-checked during The Winter Soldier, Marvel are notorious for the methods they use to rig up future events. Nothing satisfies die-hard fans more than a new character arriving onscreen, directly referencing something that already previously happened three or four movies ago. So the introduction of a race of shape-shifting alien critters will surely reveal that some existing MCU characters must already be being secretly impersonated by Skrull agents? Right? 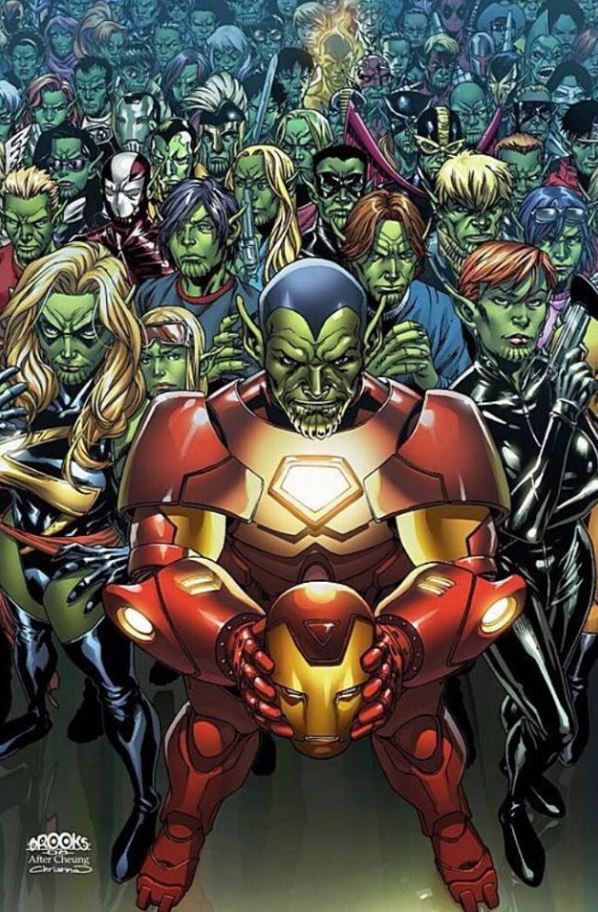 Arguably the biggest Skrull narrative in the Marvel Comics Universe was the Secret Invasion storyline. This saw the Skrull home world destroyed by Galactus, and the surviving clans slowly infiltrating earth’s superhero community in the hopes of removing them for a future invasion. This all results in the mother of all showdowns when our heroes realize that half of their number are not what they seem, and an epic throw-down where Norman Osborn (of all people) ultimately saves the day.

One of the biggest strengths of the Secret Invasion storyline was trying to figure out who was what they claimed to be, as the majority of the Skrull agents genuinely believed they were Avengers until remotely activated by their masters. In the aftermath of the final battle, all the original replaced superheroes are found in suspended animation, with no memory of heir abduction. So just how plausible is it that the Odinson might have been swapped out for a Skrull spy?

Reddit user J-Patrick believes that the events of Thor: Ragnarok almost certainly tease that Thor has been captured by The Skrulls, and replaced with one of their kind. At two points in the movie, the opening title crawl in Surtur’s cave and Thor’s arrival on Sakaar, we find our hero alone and disorientated, with broken memories about how he came to be there.

The theory is he was intercepted prior to arriving at either of these locations, spent several months having his powers and personality passed on to a Skrull warrior, and is now frozen in captivity whilst his doppelgänger impersonates him.

Here’s what J-Patrick has to say in full:

“So my theory is that in avengers 4 it will be revealed that Thor is a skrull. From his introduction in Thor right up to Age of Ultron Thor is, generally, serious and males little to no jokes.  This changes with Ragnarok where Thor’s personality changes conpletely to one of a man who spends his time cracking wise and having a good time. (This is where the Skrull takes over.)

In the outset of the film he states that he set out looking for infinity stones but failed to find any. However, Thor (The real one) did know the location of several. The space stone was at asgard, which is why is tries to stop Surtr to prevent the destruction of the space stone.

The reality stone was with the collector (delivered by the asgardians) and the power stone was in Xandar (Thor knew this was as he states this to the Guardians in Infinity war. Thor’s costume design also changes inexplicably between Age of Ultron and Ragnarok, showing the change in identity.”

The Skrull have the technical ability to replicate any superpower or memory, making their warriors pretty damn difficult to spot. In Ragnarok and Infinity War, Thor doesn’t have Mjolnir, and also seems to mysteriously gain new powers, which could be part of his Skrull programming. Couple this with the personality changes/issues described in the body of J-Patrick’s theory, and what you are left with is both exhilarating and haunting to behold.

But, as always, it’s what you guys think that counts. Is this truly great, or truly garbage? Sound off below!