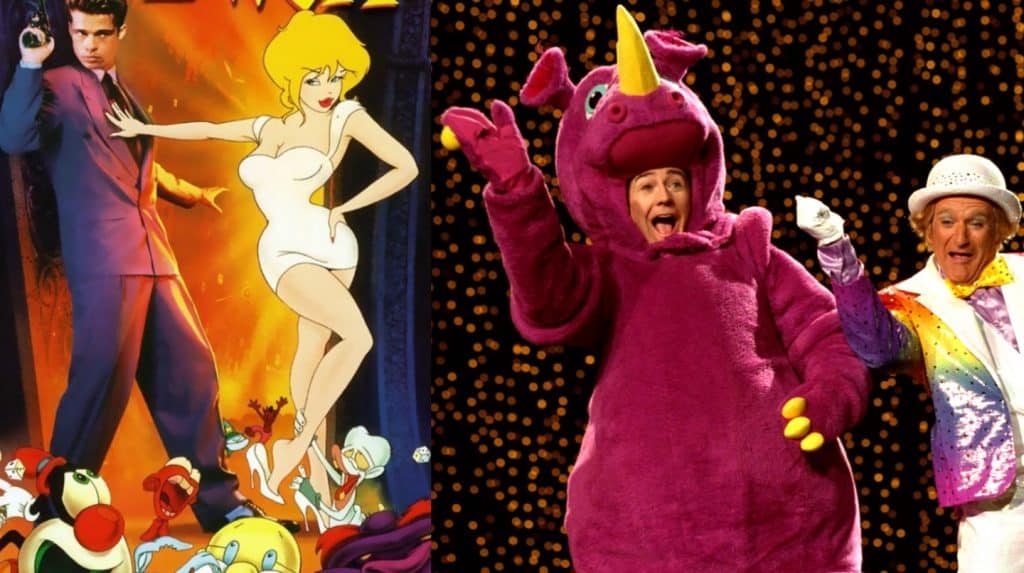 The Happytime Murders has finally reached the theater this weekend after an almost decade-long development process. Many critics have varying opinions on the film that will help you decide whether if you’ll put down your hard-earned money for a viewing. For those who want to choose an alternative in dark adult humor through unconventional means, the staff at ScreenGeek has a list for you to check out and dig into. Here are 5 kids movies aimed at adults for you to watch! 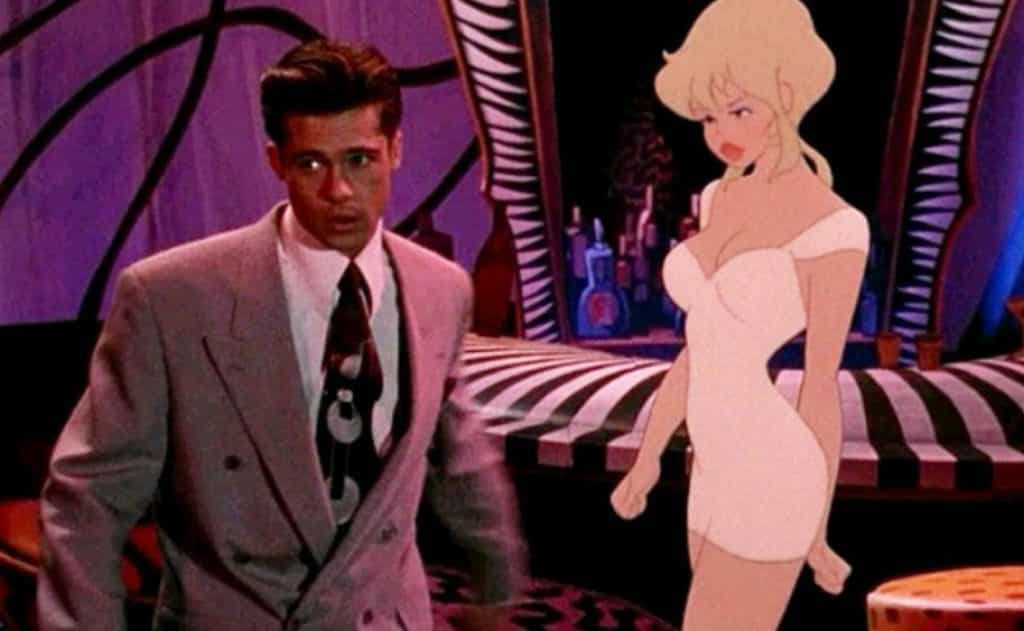 Cool World is a movie from Ralph Bakshi that was supposed to be much different than the movie we ended up getting. Bakshi pitched a hard R-Rated movie that was very dark, and was similar to Sin City in tone. The studio ultimately disagreed, especially after Kim Basinger came aboard, leading to Bakshi punching producer Frank Mancuso Jr. in the face after he was told his movie was being changed to a softer PG-rated comedy (though it was ultimately PG-13).

The result is a jumbled up movie with cool animation – that is only worth watching just to think about what could have been – as opposed to the film we ultimately received. Seriously, if that was the movie we got, it definitely would have gained cult status by now, something the original film hasn’t really done.

It’s worth nothing that Bakshi never directed another film after that. We can’t really blame him. – Frank Palmer

The Haunted World of El Superbeasto (2009) 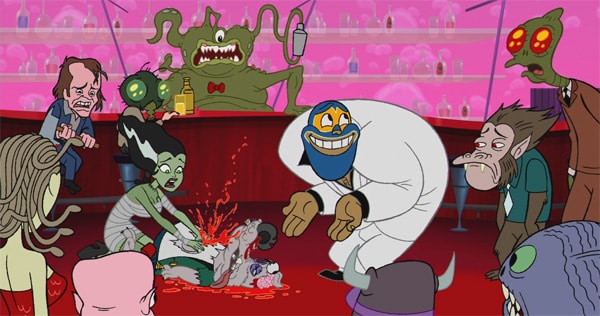 Rob Zombie really makes his own distinct style of filmmaking with excessive vulgarity, sex, and horror. Whether it be the well-received original The Devil’s Rejects or his own dissimilar approach to Halloween, Zombie has a notable presence that moviegoers will either love or hate. That is no different in his attempt at animation with the obscure movie The Haunted World of El Superbeasto.

The film admittedly is a hot mess, but one that can be appreciated by the right audience, myself included.  There is a superb animation quality that takes you back to the 90s with the style and tone of John Kricfalusi in his earlier works, amplified by a hundred. One of the best features to go with the crisp designs is the audio work itself. Musical numbers are very amusing, sound effects are used effectively to add to the scene, and the voice acting is easily some of the most impressive work seen in a while.

Many Zombie favorites like Sherri-Moon Zombie, Danny Trejo, and Rosario Dawson are mixed in with superstar voice actors Rob Paulsen, Charlie Adler, and John DiMaggio. Even Paul Giamatti has a starring role as Dr. Satan but a different Dr. Satan from his mainstream films.

Zombie goes out of his way to give some interesting jabs at his own franchises with this film; perhaps a bit of a complex with how he handled Halloween too.

Of course, this won’t be for everyone with the writing outside of its gags being subpar. The film relies very little on story development and settles on a ride that hits every bump on the road with gross-out humor and references. At points, the writing can be fairly dated with their references and some jokes may just end up looking more sloppy than other entries on this list.

While the film may have moments to drag, it has just enough insane moments to keep your brain captivated on the absurdity. Just don’t expect any huge character analysis for the film and accept it for what it is as a pretty good roller coaster ride.

This film is not for everyone, but if you love Ren and Stimpy, demented humor and a messy blender of gross adult humor, this is one cocktail proud to be served by Bakshi. – Martin Lis 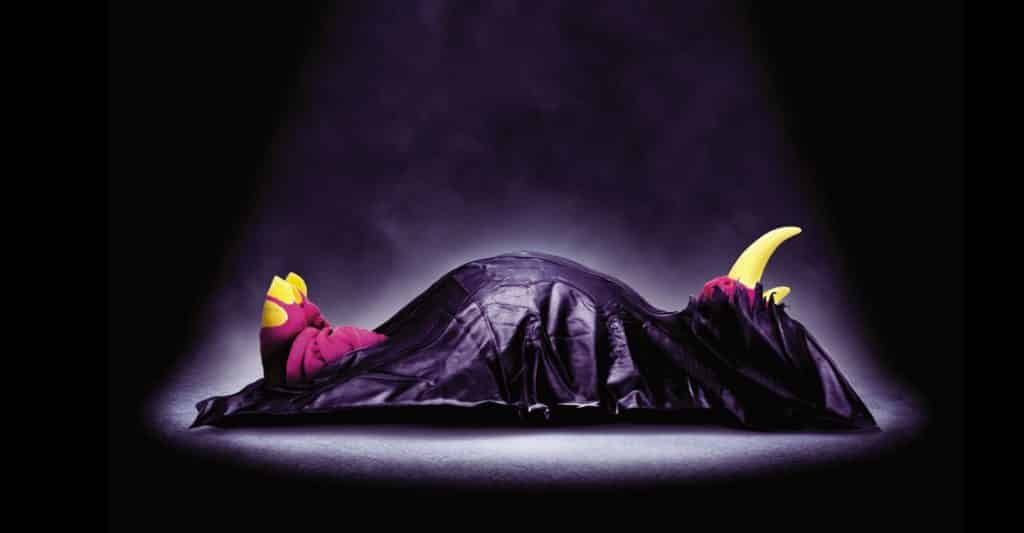 2002’s Death to Smoochy was both a critical and commercial failure at its time of release, with the late Roger Ebert even calling it “A towering achievement in a world of bad movies”. Yet despite this, Danny DeVito’s dark comedy centered around the shadier aspects of children’s television has become a cult favorite in the years since its release.

The plot of the film centers around the firing of the unscrupulous Rainbow Randolph, played to perfection by the late great Robin Williams and his feud with his replacement, the squeaky-clean Smoochy the Rhino played by Edward Norton. What starts off as a simple rivalry soon sees Irish Mobsters, corrupt charity officials, and junkie assassins join the fray with deadly consequences.

Death to Smoochy is one to be watched if only for Robin Williams incredible performance as the disgraced host. – James Hadden 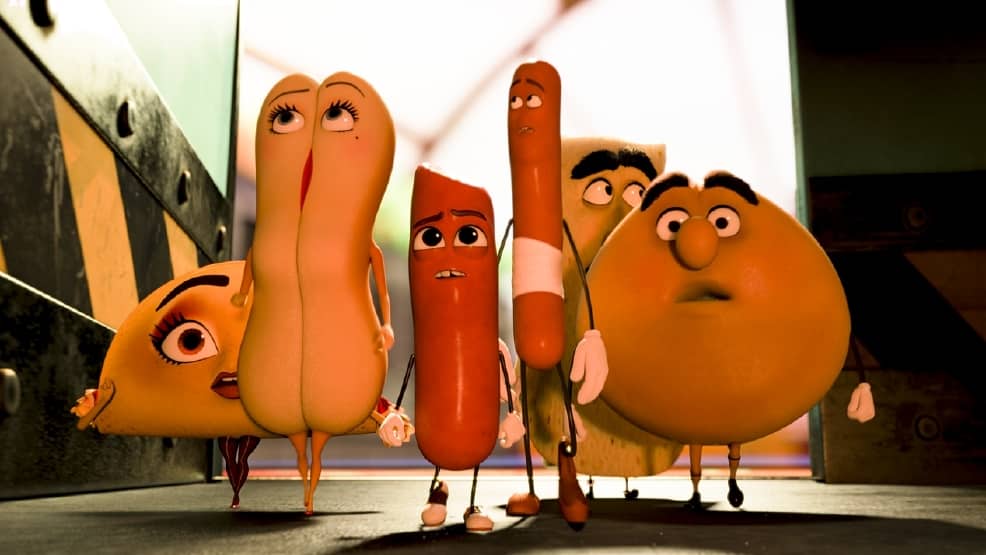 Disney and Pixar have redefined the genre of animated films with the rise of computer animation at levels previously unheard of in the industry. It was only a matter of time before someone used these advances in technology to make one giant, disgusting 90-minute long dick joke and that film is Sausage Party.

Seth Rogen and Evan Goldberg, two of Hollywood’s biggest comedy creators at the moment, wanted to see just how far they could push the envelope, and man, they just pushed that envelope straight into the shredder!

Assembling an all-star cast to voice this film including Rogen, are Kristen Wiig, Edward Norton, Nick Kroll, Paul Rudd, Selma Hayek, and many more. The story revolves around anthropomorphic food living in a grocery store, awaiting their chance to be purchased so that they may head to the “Great Beyond”. After a series of unfortunate events and one trip through the entire store, all the food products learn that the “Great Beyond” is nothing more than a brutal hellscape where they are devoured by humans. A great revolt ensues, and food prevails in killing all the humans in the store.

Behind the heavy veil of indecent and borderline grotesque comedy, there is an underlying and smartly done commentary on organized religion and mass conformity. While this film isn’t for everyone, the Meatloaf ‘I Will Do Anything for Love’ sequence is worth watching alone. – Vincent Hoover 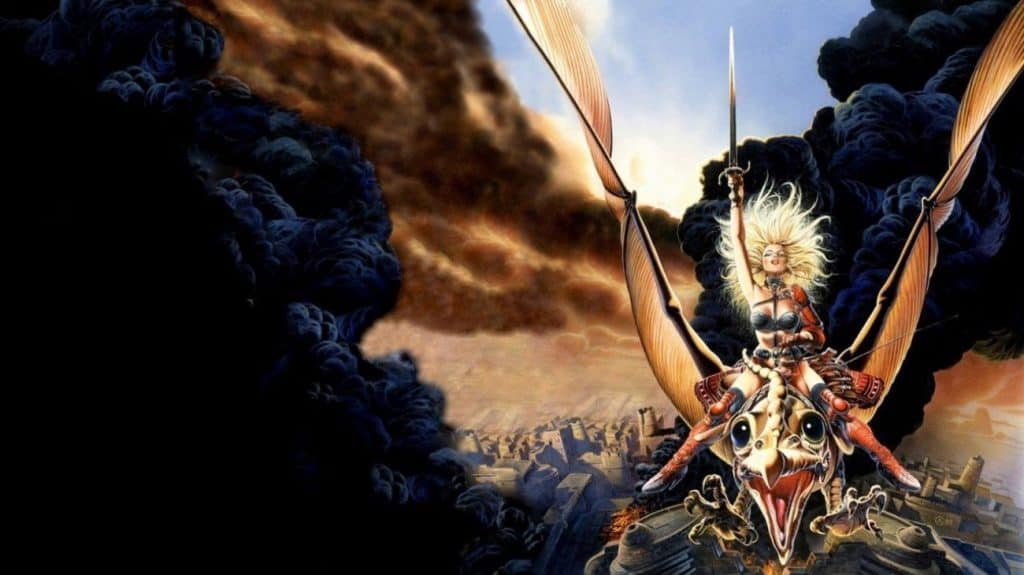 Heavy Metal is one of those niche magazines that has had a hardcore fanbase since created in 1977. Due to the cult-like status of the anthology magazine, a film was commissioned and released in theaters in 1981.

This was at a time where animators walked the fine line of children and adult animation, but Heavy Metal is considered a classic for cinephiles who want something different in their film diet.

The influence of this film has even been felt by some masters of filmmaking such as James Cameron, David Fincher, Guillermo Del Toro, Zack Synder, and Gore Verbinski. There was a sequel called Heavy Metal 2000 that was considered hot garbage and rumors of a remake have been in the wind since 2008. Check out this cult classic film and prepared to have your mind blown. – Mark Salcido

Check out these rare gems after seeing The Happytime Murders to fulfill your dark adult humor needs!