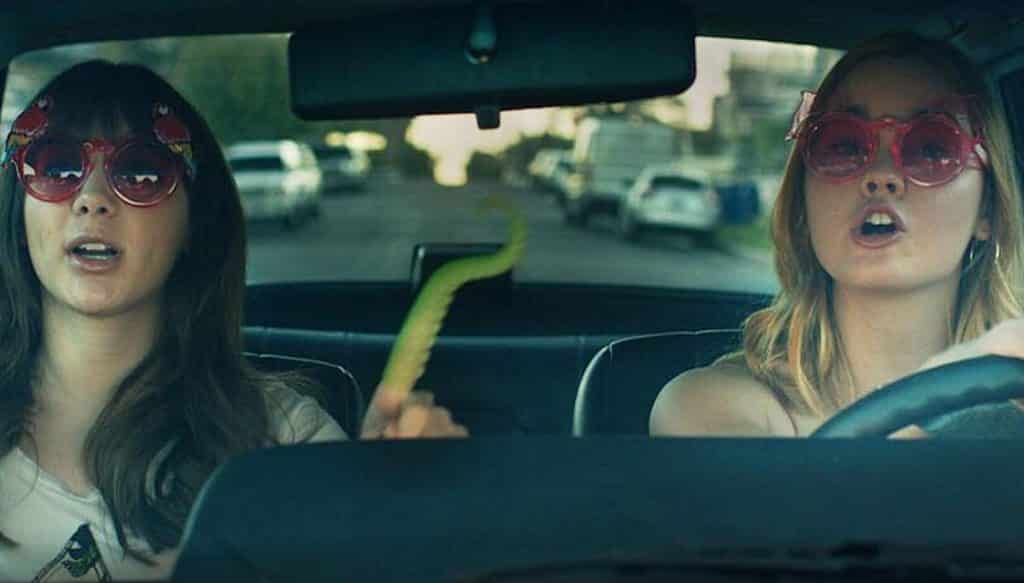 April (Hannah Marks) was a typical girl in high school. She was friends with a guy, Nick (Dylan Sprouse), but they both realized they wanted to be more. They date for two years, but when the weight of impending college plans that are on opposite sides of the continent becomes too much to bear, they split. April is heartbroken, but Nick moves on immediately to date a girl named Clara (Liana Liberato). Soon after, April and Clara meet at a house party and become unlikely friends.

The description I’ve just given makes Banana Split sound like some high school drama chick flick. I was really hesitant to watch this film for that reason. What motivated me to give it a chance was a morbid curiosity about how these two girls would become and remain friends. That little twist was new and intriguing. Also, seeing Dylan Sprouse on screen again—I must admit to some nostalgia regarding his child acting days.

This film was nothing I expected it to be. It ended up being everything I never had growing up. Films are meant to tell a story to people, with the writers, directors and actors all shaping and molding the audience’s emotions to their will like so much putty in their talented little hands. Already, in the first few minutes, the emotional rollercoaster climbed and fell repeatedly as I followed Nick and April through their highs and lows in rapid succession. My heart was already being manipulated.

After the breakup, April and Clara meet by chance at a house party and become really close. From the very beginning, their chemistry on screen is vibrant and palpable. Though their jokes could sometimes be sarcastic or dirty—there was foul language sprinkled throughout—every bit of it rang true with a sort of innocent honesty. Seeing their friendship grow stronger with each passing minute pushed Nick out of the picture at times. These two were so funny together and just having a great time going on adventures, I got caught up in it with them and forgot about him.

Dylan Sprouse was dreamy as Nick. I don’t particularly like really long hair on men, nor is it sexy to me to know a guy smokes weed at work and doesn’t really take anything seriously. He pulled both off well and made me change my mind—if only for the duration of the film. He was just another teenager about to join the rest of us in the adult world trying to get his last summer in before he had to grow up. He had real emotions, which was refreshing to see in a male teenage character.

Besides the comedy between our two leading ladies, Hannah and Liana, there were two others who were funny. Normally, people who are necessary to a story to add depth or who just connect the main characters aren’t worth mentioning. They are worth mentioning in this film, however. Addison Riecke played April’s younger sister, Agnes, with a level of cynicism older than herself and a potty mouth that would make a sailor blush. She was very much the annoying little sister that was all too easy to argue with. Her role as the younger sister was relatable, but not irritating like these types of characters so often are.

The other person who really helped push the story along was Ben (Luke Spencer Roberts). He was everyone’s goofy friend—hesitant to get in the middle but loyal to the very end. Unfortunately, since he really was everyone’s friend in this story, it was really hard for him to know where the lines were and how not to cross them. He was funny and earnest, and his character was more than just an emotional punching bag for the main characters.

The colors used throughout were golden like summer and eye-catching. Every shot, detail to scenery and color, and scene composition had a reason for existing. If I hadn’t just read that this was director Benjamin Kasulke’s first stab at directing, I never would have known. The fact that he has a background in cinematography doesn’t surprise me, though.

What does surprise me, and always will, is what happens when so many talented people come together on one project and create something so flawless. A bond between the audience and crew is made—was made with this one personal and important indie film. So, I’ll repeat myself by saying that this is not a chick flick, and everyone should experience Banana Split.

Continue Reading
You may also like...
Related Topics:banana split

‘The House with a Clock in Its Walls’ Review: A Satisfying Family Film
Los Angeles Film Festival Review: ‘The Dead Center’
Advertisement
To Top