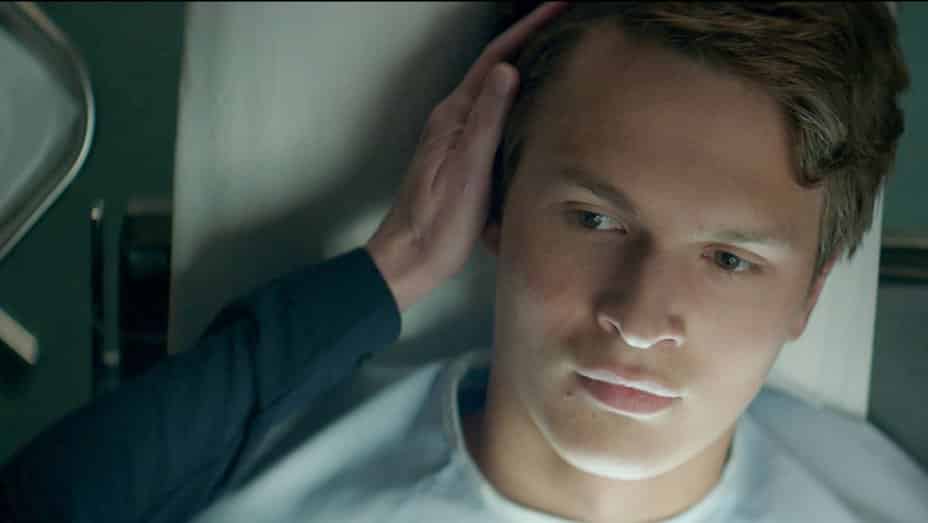 Remember those articles in scientific journals about people finding a twin buried inside their body? I’m talking about when a someone would find an extra set of teeth or hair near an organ that was mistaken for a tumor, only for that person to find out he or she had absorbed their twin in utero. Jonathan doesn’t use that scientific fact to add that layer of body horror one would expect.

What it also lacks is an extra layer of story and plot that would’ve made this sci-fi indie film from first time director Bill Oliver something truly unique.

Jonathan stars Ansel Elgort in the title role who shares a body with his twin brother’s consciousness. John, the neat, clean, and buttoned up type takes over during the day between 7 am and 3 pm. Jonathan, the more relaxed and messier twin, has full control when his consciousness is awake from 7 pm to 3 am. To communicate with each other, they each record a video journal for describing their day to establish a bond and instill trust.

It’s a simple premise that adds some layer throughout the film but could’ve gone much deeper.

The first 30 to 40 minutes of the film shows promise with the pace and progression of the story. There are several plot points that are introduced that could lead to some good conflict between John and Jonathan. John—the neat one—hires detective Ross Craine, played by Matt Bomer, to follow Jonathan—the relaxed one—at night so that John can find out what kind of life Jonathan is hiding from him. This is when the rift between the two begins.

Ansel Elgort tries to sell the film that could’ve added complexity when it comes to the story but instead, it feels like he was held back. The writing allowed several scenes in the movie to reach a high bar in the drama department or make the conflict more aggressive but continuously fell short. It’s like Elgort was told to show no emotion with one brother and go almost to the exact opposite for the other which seemed disjointed.

It’s the moments in the film when Elgort’s character starts to see the distance between him and his brother widening when the actor actually acts well. 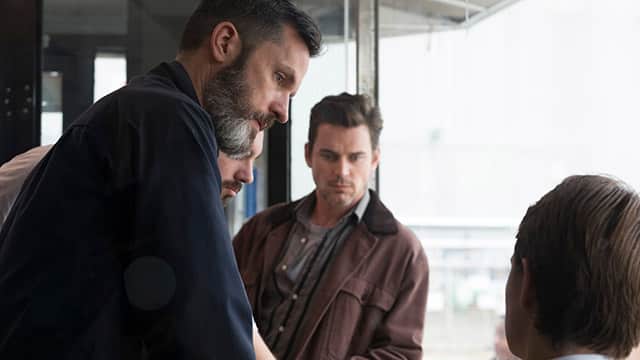 The film is shot with a minimum amount of camera tricks but that’s in no way a negative towards it. Director Bill Oliver does a simple cut to black then smash cut to show the internal battle of the siblings that I really liked. It helps propel the plot forward and starts the clock for the film causing John to finally show real concern for Jonathan’s well-being.

Oliver takes the plot device of the brothers leaving recorded messages for one another and uses it at the time when the two start to argue. A simple editing technique added more to the aggression between brothers that worked well in the plot.

The biggest problem with the film is the story. It introduces some good ideas to push the plot forward but never explores them. One idea is that of a third brother and why he’s no longer there. This could’ve really upped a much-needed level of tension in the film, but it’s never brought up again. That SHOCK—trust me it’s not earned—is just used to force an obvious plot device that was not needed at all.

Speaking of undeserved, the plot gets flipped on its head when a revelation between the brothers comes and how one of them must deal with this problem. The end result is supposed to deliver an emotional punch from the writer, but I didn’t feel anything at all. It lacks sufficient time with one of the brothers and by the end of the of film I just didn’t care.

This film could’ve been so much more if either the director or the writer decided to go all the way in with the emotional beats the story was trying to convey. I was all in for the film when I read the synopsis and I was down to see what Ansel Elgort could do after Baby Driver, but ultimately it felt like the movie went nowhere. It’s a middle of the road story that felt longer than the actual runtime.

Continue Reading
You may also like...
Related Topics:Indie, Jonathan, Sci-fi