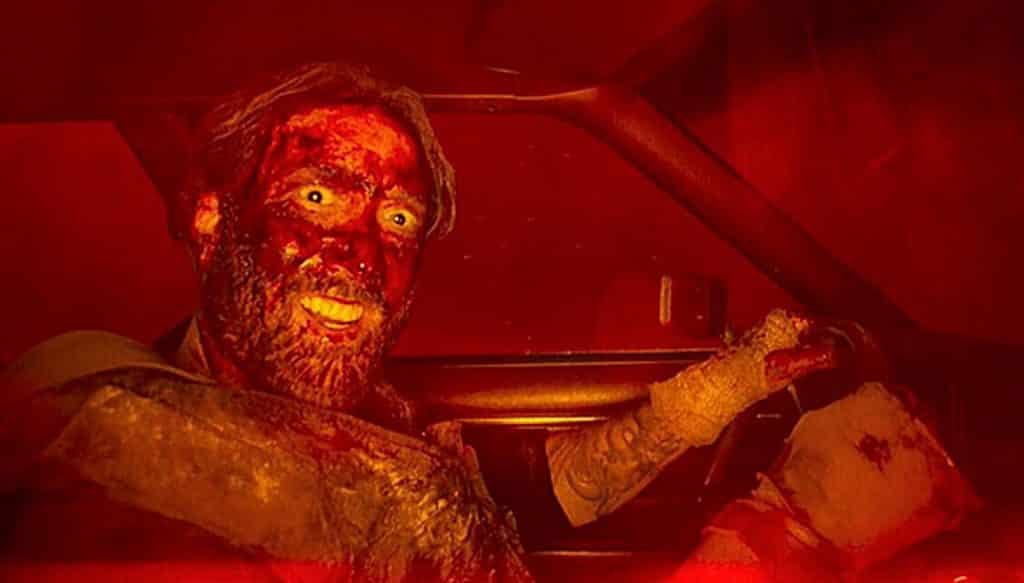 Mandy hit Blu-ray/DVD this week, and is currently a best-seller on Amazon. After expanding its release to more theaters due to high demand from fans, many are wondering if we could see Nicolas Cage return as Red in a potential sequel. While it seems unlikely at this point, writer/director Panos Cosmatos has an interesting idea if it ever were to happen.

While speaking to IndieWire, he spoke about how the film’s popularity has taken him by surprise:

“This is very surprising to me. I suspected the movie would find an audience, but that it would be a lot smaller. I hoped when I made the movie that it was speaking to an audience that wasn’t being spoken to, and I wonder if that’s what’s happened here.”

“People have asked me about [a sequel]. I don’t know if I’m a sequels kind of person. I prefer each film to have its own unique identity. When I was writing the film, to amuse myself, I imagined a sequel that took place with Red Miller fighting Nazi punks in a bombed-out city. I don’t know if that would ever happen, but it’s a fun thought.”

“The thing I do miss about the way some sequels were in the past was that each film felt like its own unique, complete tone,. Now, sequels are tonal facsimiles of the ones before them, like a television series, whereas back in the past sequels would often be radically different from the ones before.”

“I wanted to avoid the situation that a lot of directors are herded into these days, where you have to give up a lot of control. The only way I’d want to be involved with something like that is if it’s a chance to dramatically reinvent something, not something that’s already established. But at the same time, where my heart lies is with serving these things are self-generated. My gut feeling is that’s where I’ll continue to work, on a lot smaller scale.”

So who knows if we’ll ever see Red in a movie again. The current film is now out on Blu-ray/DVD and is in the top 10 best reviewed horror movies of the year. If you’re a big fan of the movie, though, we do have some cool news for you below – and it involves merchandise!

There are more shirt designs than the ones we’ve shown above, and they’re available courtesy of Legion M.

What did you think of Mandy? Did you enjoy it? Tell us all of your thoughts on the film in the comments down below!