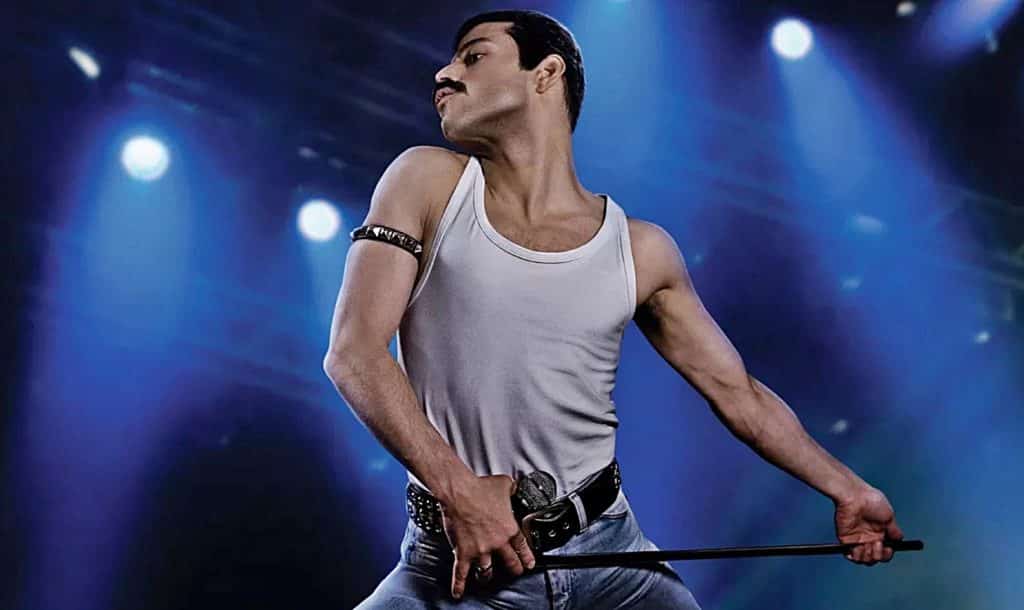 Back in my youth, any family road trip was complete with three things – a sharing bag of Maynard’s Wine Gums, a cantankerous old grandparent and a copy of Queen’s Greatest Hits. Journeys used to be broken up by how many times you would get through Don’t Stop Me Now or We are the Champions. Perhaps it’s for those reasons that I came out of Bohemian Rhapsody with a lump in my throat.

Whilst it could be seeing said that Bohemian Rhapsody merely shows us anything that we could learn from twenty minutes browsing Wikipedia, the film tells the story of Queen in a wholly entertaining way. It shows us how the band goes from their humble beginnings playing small gigs at university campuses right through to their 1985 Live Aid performance where Freddie Mercury well and truly had the whole world in the palm of his hands.

Despite being the film charting the rise of the band to stardom, at its heart Bohemian Rhapsody is a film about the life of Freddie Mercury, something which works purely down to the incredible performance of Rami Malek as the enigmatic lead singer. He plays the character so well that some times you could almost believe you are looking at the actual guy. His passion and charisma ooze into every scene that he is in. He absolutely nails Mercury’s look, mannerisms and voice and you can’t help but feel as though he will be in line for some prizes come awards season.

Besides Malek, the supporting cast is filled with plenty of talented actors including Ben Hardy as drummer, Roger Taylor, Joseph Mazzello as Bassist John Deacon and Welsh actor Gwilym Lee as an uncanny Brian May. Outside of the band you can find the delightful Lucy Boynton as Mary Austin, Freddie’s one time fiancé and inspiration for the song ‘Love of my Life’. Boynton portrays Austin with a hint of tragedy as someone who comes to terms with the fact that the man that she loves may not have feelings for her in the same way. As well as focusing on his relationship with Mary, the film also delves into his relationship with Paul Prenter, the man who almost led to the end of the Band and Jim Hutton the man that Mercury would go on to spend the last year’s of his life with before his tragic death in 1991. The film’s shows how all of these people had an effect on Mercury for better or for worse.

Now we can’t have a review of a Queen without touching upon the subject of the band’s music and whilst it does effectively play as a compilation on the band’s Greatest Hits, you can’t help but be taken in hearing it on the big screen. Seeing how the band came together to create some of their finest works is truly eye opening – with the recording of the the titular Bohemian Rhapsody being a particular highlight. What’s also interesting is seeing how the film never gained the critical acclaim at its time of release despite being one of the most popular songs of all time.

Also be sure to keep an eye out for an indistinguishable Mike Myers playing a man who can’t see people headbanging away to Bohemian Rhapsody in cars, a sly reference to his 1993 film Wayne’s World – which featured that very same scenario.

Overall, whilst Bohemian Rhapsody may at times feel as though it’s nothing more than a compilation album of Queens history, its enjoyable soundtrack, coupled with an extremely captivating performance from lead actor, Rami Malek make this one to check out. Long Live Queen!