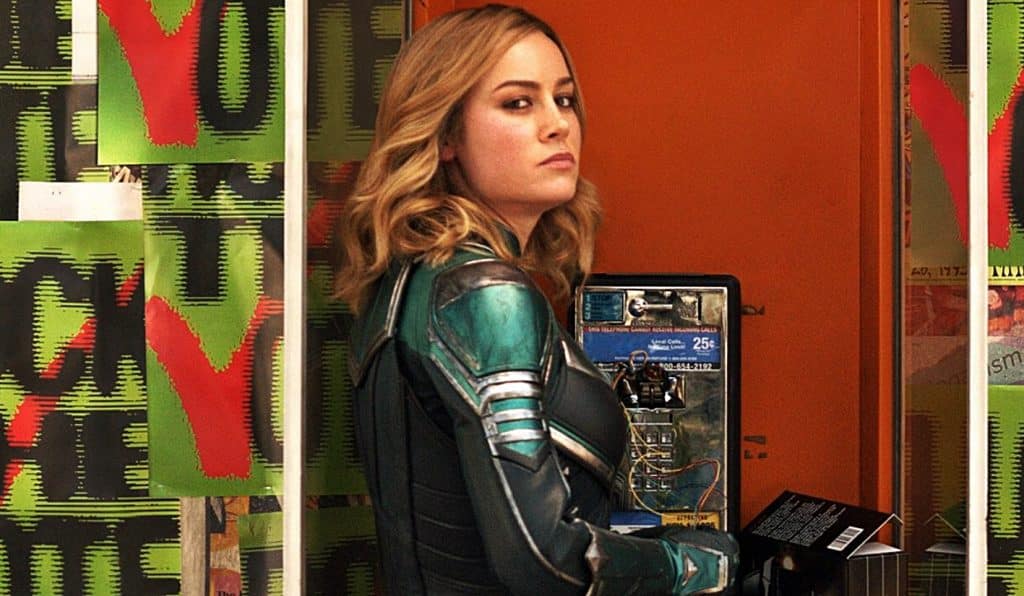 Fans all know that Disney and Marvel Studios are the kings of Easter eggs in their films. There are consistent hints and nods to their other various films, TV shows, and comic books littered throughout the backgrounds of each of their blockbusters. It gives fans extra incentive to rewatch their movies for a visual scavenger hunt. But, sometimes, those Easter eggs could come back to bite them in the rear, if they’re not properly researched. In a recent one from Captain Marvel, one such Easter egg did just that.

The photo was posted by Brie Larson to help promote voting during this year’s midterm elections. The scene is from the upcoming 90’s solo film for Captain Marvel, with the wall behind the phone booth doctored up with “Rock the Vote” posters. The unknowingly heinous Easter egg, however, is inside the phone booth, on the phone itself.

CAPTAIN MARVOTE IS A BAD PUN BUT NOW THAT I HAVE YOUR ATTENTION PLEASE VOTE TOMORROW pic.twitter.com/ZhXk5Qzkt5

If you look closely, there is a phone number on the phone (we’ve left the number off the article purposely). Now, instead of using the prototypical 555 numbers most films use, Disney opts for an actual number that fans can call and receive a message. This number isn’t new to Disney, either. It used to be the phone number used on their kid’s show, The Suite Life of Zack and Cody. When fans would call that number, this was the message they used to receive:

“Thank you for calling ABC. The number you have reached is a fictional, non-working number used for motion picture and television productions.”

However, that is no longer the case. Apparently, the number became available at some point, and a different company now owns it; an Adult Phone Chat group.

“Welcome to America’s hottest talk line. Guys, hot ladies are waiting to talk to you, press one now. Ladies, to talk to interesting and exciting guys free, press two to connect free now.”

Obviously, this isn’t exactly the image that Disney and Marvel want to portray. Most likely, once the higher ups here of this little “snafu”, they’ll change the numbers in post so that young kids aren’t calling an inappropriate phone number accidentally. Disney has a torrid history of sexual innuendos and subliminal messages appearing in their films, but this one truly seems like an accidental coincidence.

What do you think of this accidental 18 & up Easter egg? Let us know in the comments below!