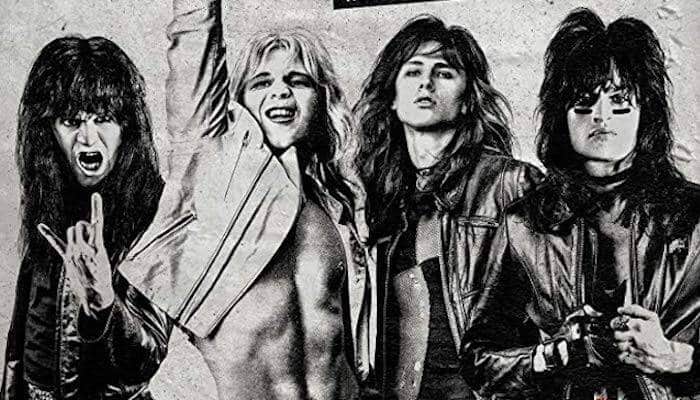 Music biopics are perhaps the most popular type of biographical film, recently display with Bohemian Rhapsody’s successful financial and awards run. The latest music biopic The Dirt centers its sights on another 80’s fixture in Motley Crue. Bringing to life the high’s and low’s of their wild ride, this biopic is one that fittingly captures the rowdy image of the band’s eventful run in the spotlight.

The Dirt follows the true story of four equally-dysfunctional teenagers who come together to form the band Motley Crue. When their music begins to take off, each member must face the ramifications of a life of sex, drugs, and rock n’roll.

Motley Crue wasn’t a band of substance, shouting their message of partying and free-living with passion rather than weight. It’s only fitting that their biopic is more of the same, a film that provides an entertaining ride through the band’s history without much substance.

Director Jeff Tremaine is known for working within the Jackass comedy realm, with the debaucherous energy of those films transferring to this material seamlessly. Tremaine gets inventive with his style techniques, as POV concert shots and fast-flying camera work imbue a dynamic flair fitting of the rock scene. The movie is well-paced throughout its 100-minute duration, helping the film brush past its noticeable flaws.

Performance-wise, the young cast does a solid job of bringing the iconic band to life. Douglas Booth and Daniel Webber are solid as Nikki Sixx and Vince Niel, capturing both men’s outgoing lifestyles that came to contrast to their deep sadness. Iwan Rheon captures the idiosyncratic personality of Mick Mars, while Machine Gun Kelly (or Colson Baker) surprises with a naturalistic performance as the emotion-driven drummer Tommy Lee. The four form a cohesive group together, pulling off the dysfunctional family dynamic and the dramatic high’s and low’s that come with it.

The Dirt does confine itself to fit the mold of music biopics, but the film thankfully approaches that mold with authenticity. Amanda Adelson’s script doesn’t skimp out on capturing all of the band’s debauchery, whether it be good fun or potentially damaging. By displaying the flaws of each band member, the film thankfully gives a well-rounded depiction of each.

That being said, The Dirt is very much an exercise in style over substance.  Both Adelson and Tremaine struggle with the film’s sobering second half, failing to capture their genuine struggles and pain with much nuance. The third act is tedious, as it rushes to its foregone conclusion without fleshing out detail. Adelson’s script also is so-so when it comes to the dialogue, with many expository dumps being used to painfully push the story forward.

The Dirt certainly won’t change the game when it comes to music biopics, but it’s a fast and fun biopic that captures the wild energy of Motley Crue.

Continue Reading
You may also like...
Related Topics:Netflix, The Dirt