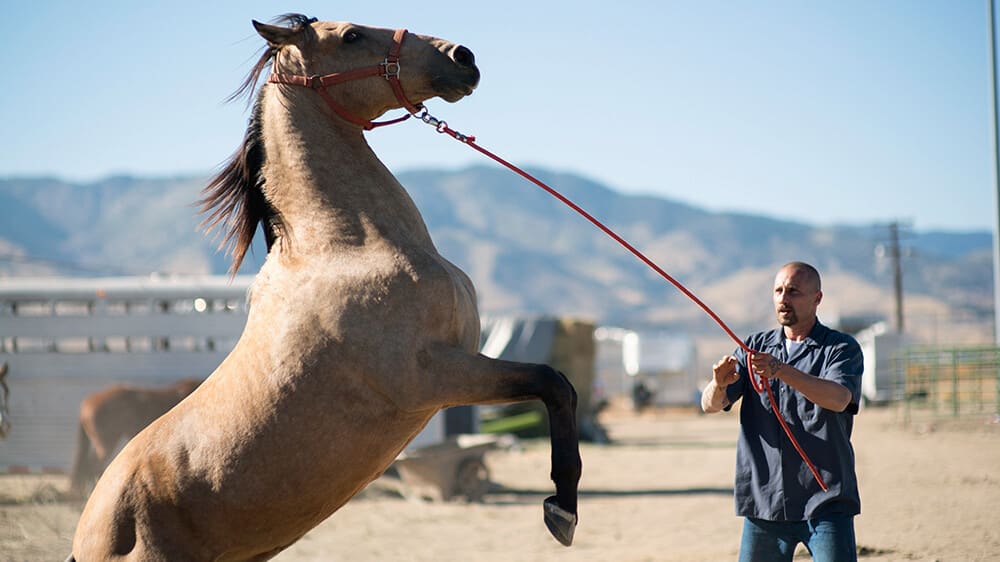 The Sundance Film Festival is one of the most acclaimed events in the film calendar, with many promising indies debuting in an effort to find their distribution. Success stories like Apollo 11 and Fighting with My Family have already enjoyed critical and financial prosperity, with the latest Sundance graduate The Mustang now hitting theaters. This subdued drama offers audiences a familiar tale, yet one told with nuance and much-needed realism.

The Mustang follows Roman Coleman (Mathias Schoenaerts), a violent convict who spends his days simmering with anger in his prison cell. He begins taking steps towards rehabilitation when he joins a therapy program involving the training of wild mustangs.

Stories of the heartwarming relationship between man and animal have been done countless times on the big screen, but few efforts are assured at capturing a genuine connection between the two as The Mustang. This drama succeeds despite the conventions of its formula.

The heart and soul of The Mustang is the strong performance of Mathias Schoenaerts, who brings great complexity and emotion to the role of Roman. Playing a quiet traumatized man stuck in a continuous state of anger, Schoenaerts early scenes present audiences with a convincingly menacing presence as he seethes at every remark.

The Mustang’s ultimate joy is seeing the evolution of Schoenaerts character as he acclimates himself into the program. Schoenaerts ability to subtly let down his armor and open up is rewarding in its naturalism, with the connection he makes having a strong impact. It’s easy as an audience to feel for these two kindred spirits, two wild spirits caged in the confinement of captivity who bond together to help process their emotions. Strong supporting performances from Bruce Dern and Jason Mitchell do a lot to spice up the fairly familiar side characters.

French Writer and director Laure de Clermont-Tonnerre delivers a commendable English-language debut. The strength in her effort lies in her ability to let Roman and his horse grow patiently onscreen, letting the incremental steps build to develop a sturdy connection. Tonnerre isn’t afraid to go against conventions with a more subdued approach, which proves all the more rewarding when it comes to the film’s moving finale.

The Mustang does suffer some stumbles. The film’s mostly realistic approach is at time upended by melodramatic plot beats that ultimately build to very little, including a third act tragedy that never has the impact it should. At the end of the day, this story of man and horse does follow the beats one would expect going into the film. It’s what Schoenaerts and company are able to do with those familiar beats that makes The Mustang effective.

Continue Reading
You may also like...
Related Topics:Sundance, The Mustang