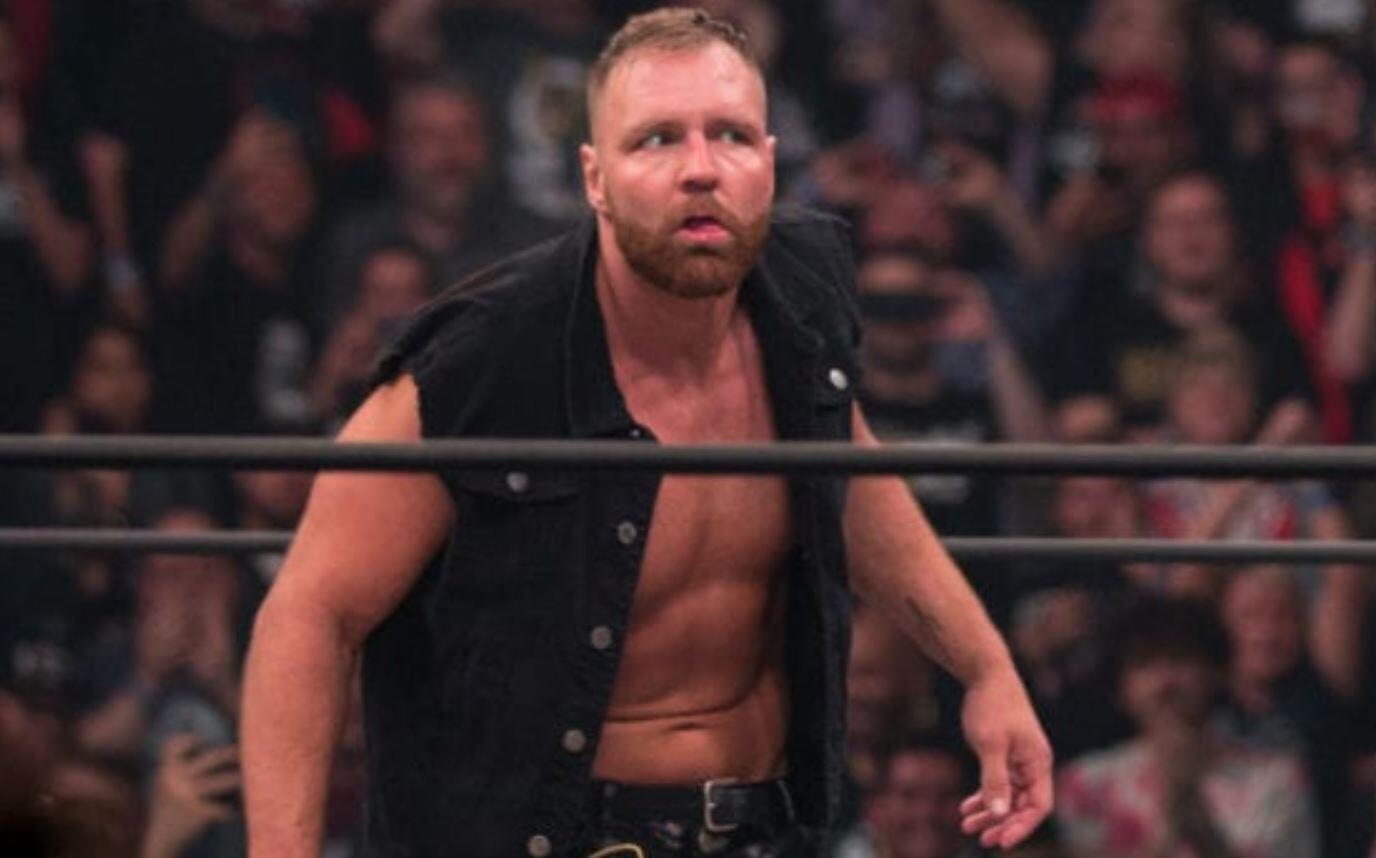 Professional Wrestling is at the cusp of a brand new renaissance. Thanks to Cody Rhodes, Kenny Omega, and the Young Bucks, along with billionaire Tony Kahn, a whole new type of sports entertainment is hitting the airwaves in the form of All Elite Wrestling. Grabbing tons of talent from the indy scene, as well as former WWE talent, AEW is already taking the world by storm. One of their biggest acquisitions is Jon Moxley, formerly Dean Ambrose in WWE. ScreenGeek got the chance to sit down with him at a NYCC roundtable and get his take on things.

What will AEW do to prevent the staleness of the same guys fighting each other?

I think that’s important. To see guys fight every single night for 8 weeks, 8 weeks later you’re kinda sick of them fighting. I think we gotta – One thing we have to make sure we have like the ‘Big Fight’ feel. Because we’re gonna have just four big PPV’s a year. The big fight’s are gonna have to have the big fight feel. Like the first time you seen them square off in the ring. Like, we got through all the press, we got into town, and when the bell rings it’s like ‘Woah okay!’.

I think a lot of wrestling on t.v. over the last few years is everybody is fighting everybody all the time and everybody is pinning everybody, everybody’s beating – champions are getting pinned every night. You get a title match because you beat the champion. Well, then he’s not the champion anymore, is he? I think we need to preserve the old school, big fight feel. It will be easier for us with only four PPV’s a year, we may end up doing more, but I think that’ll be easier on us to do that because we won’t need so much content.

With more freedom with your character now, will we see more hardcore from you? And what can we expect from you?

Um, as far as hardcore stuff, some of the stuff like you saw me do with Joey Janela, you know that was a, that was a certain situation on a certain night. You put our two names together and… the expectations a re such that we got to take it all the way to the edge, otherwise people are going to be disappointed. And I’m not willing to disappoint the fans.

For years, I’ve been saying all this violent stuff that I’m gonna do. (in a mocking Vince McMahon voice) ‘I’m gonna rip your head off in Hell in a Cell!’ And i’m like, no I’m not. Not at all. There’s gonna be no blood, whatsoever. There’s no intensity or violence whatsoever! It’s just the same hokey crap you see, you know. You can make a horror movie looking trailer, (mocking McMahon voice) ‘Hell in a Cell!’ all you want, but its not gonna be that. In that scenario [the Janela fight], I was like, ‘Welp, we’re going balls out, because I’m not gonna be in the business of disappointing the fans’. I’m gonna push the physicality level for my part in AEW, you know.

And when I say violence, it doesn’t necessarily mean chairs, tables, and barbed wire. It means that I’m trying to hit you so hard and put my fist through your head. I’m not here to do some gimmicky song and dance or play around or do some cart wheels before I do a little spinney thing. I’m not trying to do any of that. There’s plenty of guys who are gonna do plenty of flashy stuff. I really can’t, so I’m not even gonna try. I’m coming right at you, I’m trying to hurt you. I wanna bring that physicality and that intensity and that violence and that aggression to my matches, whether they be 3 minute hailstorms of fists and boots or 15 minutes or whatever. That’s the way I like to wrestle. That’s just the way I naturally am in the ring. And I wasn’t allowed to be that.

Literally, like ‘No!’ I mean [WWE] is literally telling me what to do, barking orders at me. (in McMahon voice) ‘Sell!’ ‘Lay down!’ It really, truly feels like I was asleep, mentally checked out, for like years. Like, I became a lapsed fan. I’d be watching the product that I’m a part of in the locker room and going, ‘This show sucks’. I became a lapsed fan, so I know they exist. And it really was like there was this completely separate guy that existed who got outta prison and it’s just like I woke up and it was crazy. I just feel like a better person all around. Just back to being me, in and out of the ring. Not necessarily just the character.

Did that feeling lead to that prison promo you posted online?

But I was like, ‘I may just have to build myself completely from the ground up’. My thought was like, ‘Alright, Imma gonna go to Japan, or go to indies… or maybe try to find a new character. I might even get a new name. I’m just gonna completely start from scratch’. I almost thought of it like taking myself off Broadway, so to speak. I would just completely disappear. And the, when I kinda thought that, ‘Ok, I got a new thing going on’, then bring it back to, like, the national exposure. That didn’t happen at all!

I just bascially walked right into AEW, you know, right in to the G1. The thing is, I didn’t really need any time to figure anything out, cause almost as soon as I had my first match in Japan, and just kinda emptied my brain of all preconceived notions, I was like, ‘Just rely on instincts and see what happens’. I felt like I forgot how to wrestle, then 2 minutes later, I’m beating the holy ever loving shit outta Juice Robinson, just beating the fuck outta him, and I was like, ‘Oh yeah, this is what I used to do all the time! This is what feels natural!’ Just being a mean, aggressive, antagonist. That version of me was something WWE was never interested in, so they missed out. But, who cares? Timing is everything.

This is the most exciting time in the business, I think, since I’ve been in the business, the most exciting times since I was like 12. And to be at the forefront of it, it feels so good. I’m addicted to this weekly t.v. now. At the end, when we hit 9:59, 10 o’clock, and we got our first two hours in, and we’re sitting in gorilla, and it was high fives all around… well, I guess it’s not ‘gorilla’… it was like we just won a football game and it was instantly like, ‘oh, I can’t wait til next week!’

Do you regret not leaving WWE sooner?

That’s an interesting question. I’ve often thought, and wondered, what would have happened if I left in September of 2015, which was when I signed my last contract with WWE. But, at that point, I was still kinda like, still trying to do things their way and I just kinda like… It never occurred to me to leave really back then. It felt like I wasn’t, like I hadn’t completely… I never really bought into their bullshit kind of thing, but I like was trying to be optimistic. Like, be grateful for the opportunity and try to make the most of it and, you know, save money and so forth.

But, I often wonder what would have happened if I had the foresight to just leave back then. I don’t know. It could have been worse, it could have been better, but, ultimately, everything’s supposed to work out how it’s supposed to be. The timing of, like, leaving at just the moment that AEW came into existence and just merging at the same time, that feels like a historical thing that I’m very grateful that it happened. Hopefully, it’s historical. We look back in five years and maybe it didn’t matter at all. But, you know, we’ll find out.

In your final WWE interview, was your line of ‘cashing your chips in’ and reference to AEW?

Moxley – It was an interview. It was my last night and they had us do this sit down Michael Cole interview. A Shield special. And I was like, ‘What? That’s weird…” Cause the whole time they’re sending me out to, like, to do goodbyes and stuff… And they didn’t know how to handle it. Bury me, push me, bring the Shield back together, and they killed me off like 4 different times. I went thru a table, then they put my head thru the stairs, they didn’t know how to handle it. Because I didn’t say anything. And because Vince couldn’t buy me, they didn’t uinderstand. They couldn’t how… cause they had no control. He just couldn’t wrap his head around that I was leaving. So, I felt like they were gonna try and get the jump on it. I was real defensive because I thought they were gonna try and ‘get the scoop’. I just felt like it was a set up. But, no, [it wasn’t a reference to AEW], it was ‘cash my chips in’… I walked into FCW, drove from Philly to Tampa with literally the cash I had in my pocket and my bag. That’s all I had in the whole world. Hence, ‘walk into a casino’ and try my luck at this WWE thing and see if it works out. However many years later, I did pretty fucking good, but now it’s time to, ‘alright, i’m done playing, now it’s time to cash out and walk out’. That’s what I meant by that.

Do you think your wife [Renee Young] will make the jump to AEW sometime?

Moxley – Uh, she’s got A LOT of stuff on her plate. Alot of things she wants to do. I mean, you’d have to ask her what all her goals and aspirations are, but she has a lot of them outside the wrestling business. Right now she’s just like, right now over there she’s completely invaluable. She has a lot of great opportunities with Fox, and uh, which is great for her, and uh, her, you know, I uh… her future is in her hands, she can do whatever she wants, and she’s uh… It’s good to be her right now. A lot on her plater right now, a lot on her plate. It’s very cool, you know?

Moxley seems to have zero regrets about leaving the megalithic company that is WWE and move on to a brand new product. Now, fans get to look forward to seeing the real Jon Moxley every Wednesday night on TNT.

What do you think of Moxley’s comments? Let us know in the comments below!