It may not be the traditional autumn atmosphere of October, but December is just as good of a time as any for horror fans to celebrate their love of the genre. While some people may be settling down with hot cocoa and their favorite Christmas themed movies, horror fans are still enjoying their favorites like Gremlins or Silent Night, Deadly Night. And it looks like one horror fan in particular, Ukrainian artist Nikita Veprikov, had their own way of celebrating their love of horror during the Christmas season. They digitally created three snowmen designed to resemble a specific group of horror icons.

As you can see in the images provided down below, it’s very obvious which horror icons the three snowmen are intended to represent. We have a version of Hannibal Lecter from The Silence of the Lambs, Freddy Krueger from A Nightmare on Elm Street, and lastly the Billy puppet from the Saw franchise. The three snowmen are incredibly detailed, right down to Billy’s red button eyes, Freddy’s carrot nose, and of course, Hannibal Lecter’s memorable mask.

Nikita Veprikov recently spoke with Syfy Wire about the project, which he claimed came as a result of the Michurin advertising agency.

“This was used for billboards to advertise fuel that works well in low temperatures,” he said via email. “Client came up with the concept: to draw snowmen that depicts cold weather and combine them with famous horror characters to scare drivers. The slogan used along with illustrations was “Has frost started to frighten you?” Client mentioned which characters from horrors he liked and I came up with the designs that was sorted out and improved on the stage of sketches. Making designs I just adapted key features of each movie character to the snowmen bodies.”

It’s an interesting advertising concept for sure, one which is unfortunately not being used in the United States. Nevertheless, that doesn’t mean horror fans can’t celebrate and share this amazing artwork with one another – especially during this year’s December, which every horror fan has the right to make as memorable and spooky as any October day. 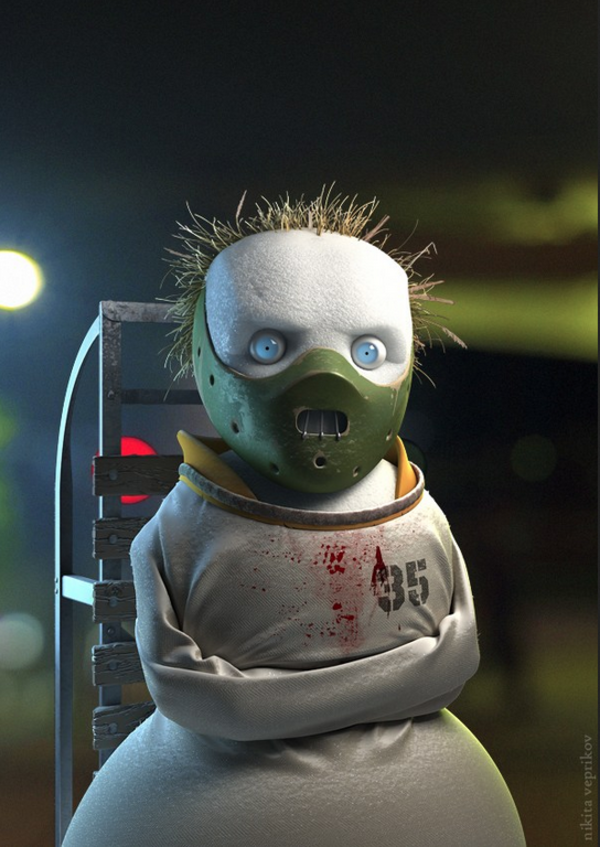 What did you think of the three snowmen based on horror icons? Were you impressed by the artwork? Let us know your thoughts in the comments section down below!