One of the most iconic and memorable superhero characters under the Marvel umbrella is none other than Peter Parker aka Spider-Man. He’s been an important part of Marvel for decades now, ever since that faithful original storyline where Peter Parker ended up getting bitten by a radioactive spider. The event left him with a variety of superpowers, those of which have been as important to the character as his personality traits and brightly colored superhero costume. But as it turns out, there’s one superpower from the character’s early days that was kind of forgotten. And honestly, it’s probably for the best, as it’s definitely a strange superpower for Spider-Man.

Now Peter Parker is obviously known for having an array of superpowers that remind readers that he’s supposed to be incredibly spider-like. For example, he has the ability to crawl on walls. He also happens to possess the power of superhuman strength, and a spider-like agility that allows him to more easily dodge attacks and handle his own against some pretty major supervillains. But what most fans may not remember from his earliest adventures, is that Spider-Man actually had another strange superpower – chest expansion.

The power of chest expansion interestingly first appeared alongside the first appearance of Spider-Man’s greatest nemesis – the Green Goblin. He manages to track down Spider-Man and send him into a trap disguised as a paid movie appearance gig. When Spider-Man ends up getting attacked by a group of supervillains waiting for the masked hero, he ends up getting caught by Montana’s lasso. It’s at this moment he uses the strange chest expansion superpower, one which allowed him to break free of the lasso and escape.

Of course, this appearance of Spider-Man’s chest expansion wasn’t the last time the superhero used the ability either. But as time went on, the power had remained (wisely) underused until it seemed to have been forgotten completely. And that’s probably for the best, considering it’s a pretty bizarre ability that doesn’t really make sense for someone who’s supposed to essentially have the same powers as a spider. 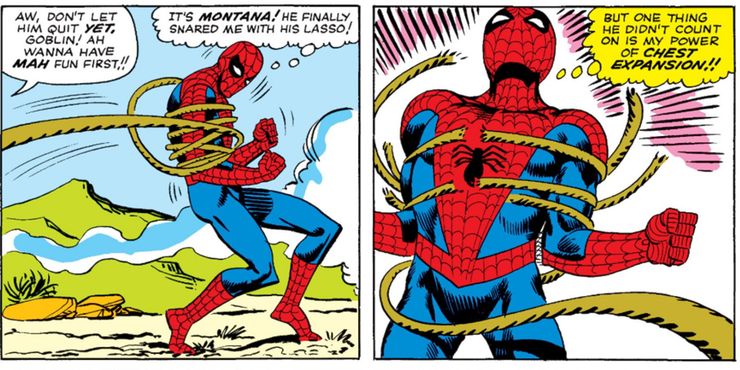 While that power may no longer be used, it goes to show some of the history that goes along with Spider-Man. And in retrospect, it’s quite fascinating to see how the character has changed so much over the decades despite so many characteristics and powers remaining the same.