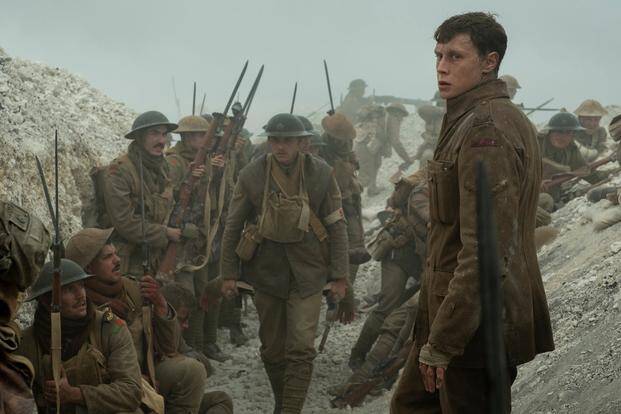 War films and Oscar season go hand in hand, especially when acclaimed directors find innovative means of crafting these endeavors. 2017 brought us Christopher Nolan’s Dunkirk, in which the Dark Knight filmmaker pushed the envelope with three interwoven narratives from the land, air and sea to depict its World War II conflict. This award’s season, Skyfall helmer Sam Mendes presents audiences with 1917, a World War I tale told with a “one-take” tracking shot approach that has already been showered with award recognition. While the film has enough merit to recommend, it does fall short of its prestigious hype.

1917 follows Corporal Schofield (George MacKay) and Corporal Blake (Dean-Charles Chapman), two British soldiers that are tasked with a mission to intercept a British force that is moving into a German trap.

To address the elephant in the room, Mendes and cinematographer Roger Deakins have accomplished an impressive technical achievement. Aside from a few obvious cuts and some shaky visual effects, the “one take” approach is effective at capturing the soldiers and their day-to-day lives. The technique also integrates audiences into each environment, letting them breathe in the setting and feel the tension of each moment. Whether 1917 is going from a plane crash hurdling towards the soldiers or a heroic race across enemy lines, this project offers a roller coaster ride of experiences that often entertain and always presents thoughtfully-constructed camerawork.

Perhaps where Mendes effort shines through the most is capturing the commonplace realities of war. Scenes where the camera seemingly disappears as characters face the reality of their often hopeless mission leave the largest impact, with Mendes thankfully letting these moments play out with patience and quiet emotional impact. Stars George Mackay and Dean-Charles Chapman deserve significant credit for carrying this film on their shoulders with authentic performances that equal in strength and vulnerability.

There’s a lot to appreciate about 1917, but I couldn’t help feeling like the results were less than the sum of their respective parts. Mendes’ screenplay moves frenetically throughout its two-hour runtime, and while its often throwing entertaining moments at the screen, the story and its respective characters often feel overshadowed by the technical majesty of the camerawork. The small, character-driven moments truly leave an impact, with Mendes having the potential to create a more impactful parable of war if they were the narrative’s greater focus. I wish the emotionality of 1917 could equal its accomplished craftsmanship, but there’s still an engaging ride for audiences to take part in.

Continue Reading
You may also like...
Related Topics:1917, Oscars