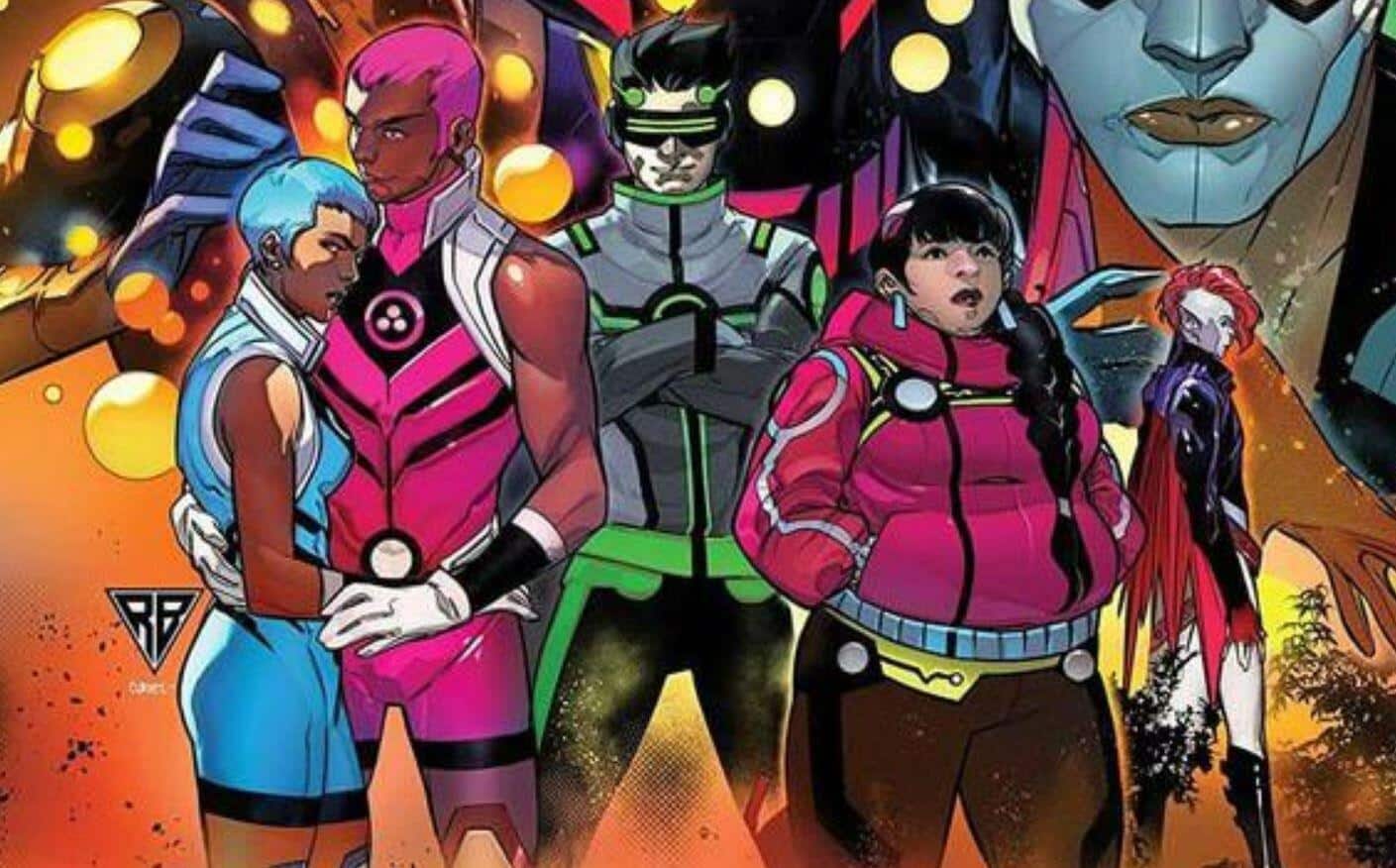 For Marvel fans, the team of teenage superheroes known as The New Warriors will be most remembered for being one of the leading factors in the the creation of the Superhero Registration Act, which in turn led to the controversial Civil War storyline. Now, Marvel is looking to bring a new iteration of the team (The New New Warriors?) to the comics, the first details of which have now been revealed.

The comic series is set to be written by Daniel Kibblesmith with art by Luciano Vecchio and will see classic members of New Warriors such as Night Thrasher, Firestar, Rage, Speedball, Namorita, and Silhouette mentoring an all new team of heroes consisting of Trailblazer, Screentime, Snowflake, Safespace, and B-Negative – all of whom seem like they were specifically created with the millennial group in mind. You can check out a YouTube video introducing the team – as well as descriptions from Kibblesmith – below.

The new members of the team include:

A regular kid scooped up into the world of teenage Super Heroing. Her “magic backpack” is actually a pocket dimension with seemingly infinite space, from which she can pull out useful or random objects—it’s not always under her control. She claims to get her power from god, but “not the god you’re thinking of.”

Kibblesmith: “Trailblazer wants to help people, but she doesn’t think of herself as a Super Hero (yet!). The Marvel Universe is a reflection of our own, and when a new law gets put into place, it affects people in unforeseen ways.”

A Meme-Obsessed super teen whose brain became connected to the internet after becoming exposed to his grandfather’s “experimental internet gas.” Now he can see augmented reality and real-time maps, and can instantly Google any fact. Does this make him effectively a genius? He sure acts like it does.

Kibblesmith: “The word ’screen time’ is only ever used in a sort of restrictive sense, and because we’re doing a story about teenage rebels, a lot of the names are about teens fighting against labels that are put on them. So with Screentime, we liked the idea that he has infinite screen time.” 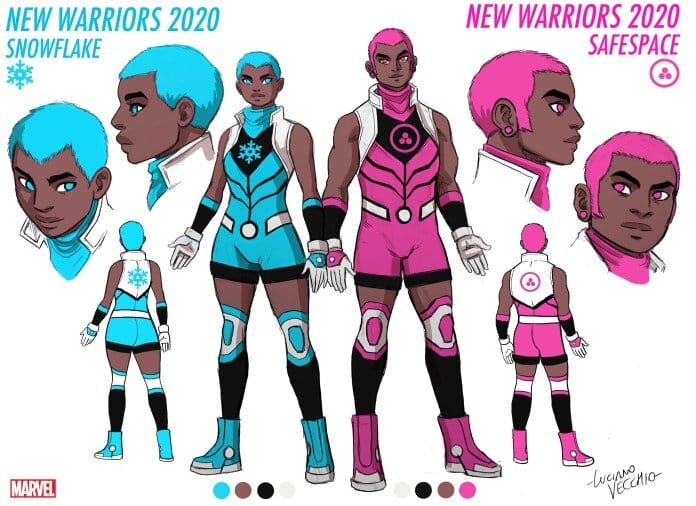 As psychic twins, Snowflake, a cryokinetic, can materialize snowflake-shaped shuriken projectiles for throwing. Safespace can materialize pink forcefields, but he can’t inhabit them himself, the reflex only works if he’s protecting others. They’re hyper aware of modern culture and optics, and they see their Super Heroics as “a post-ironic meditation on using violence to combat bullying.”

Kibblesmith: “Snowflake and Safespace are the twins, and their names are very similar to Screentime; it’s this idea that these are terms that get thrown around on the internet that they don’t see as derogatory. [They] take those words and kind of wear them as badges of honor. Safespace is a big, burly, sort of stereotypical jock. He can create forcefields, but he can only trigger them if he’s protecting somebody else.

Snowflake is non-binary and goes by they/them, and has the power to generate individual crystalized snowflake-shaped shurikens. The connotations of the word ‘snowflake’ in our culture right now are something fragile, and this is a character who is turning it into something sharp. Snowflake is the person who has the more offensive power, and Safespace is the person who has the more defensive power. The idea is that they would mirror each other and complement each other.”

A teen “living vampire” exposed to Michael Morbius’s blood as a child in a rogue, but life-saving medical procedure. He still ages like a regular kid, but has all the abilities of Morbius. He’s also obsessed with all the music and attitude of a “classic” long-past decades like the ’90s, and the ’00s. “The world is a vampire…and so am I.”

Kibblesmith: B-Negative is the goth kid. When he was a baby he got a rogue lifesaving blood transfusion, we assume, from Michael Morbius. And now he has a very similar look, and very similar vampire powers…B-Negative ages like a regular person (or does he?) and he definitely drinks blood (or does he?), but designer/artist Luciano Vecchio took brilliant inspiration from the ’90s Spider-Man cartoon and gave B-Negative the ‘leech suckers’ that the animated version of Morbius had on his palms.”

It’s safe to say that this team is specifically intended to reflect the modern era, similar to how earlier incarnation were intended to mirror the eras they were released. Describing his intentions with the series, Kibblesmith explained:

“I wanted to have teen characters who felt as “now” as the New Warriors did in 1990. The New Warriors have been zeitgeist characters from the beginning, you get edgy skateboarding Night Thrasher in the ’90s and the Reality TV team in the 2000s, and now in 2020, we have New Warriors who have never grown up without the Internet, and one character who appears to essentially live inside it.”

The series has already been the source of negative press – with some fans not too impressed with the characters of Safespace and Snowflake, especially with the latter who is being touted as the first Non-Binary hero in the Marvel Universe. Check out some of the tweets below:

Why on EARTH would you name Marvel's first non-binary characters 'Snowflake' and 'Safespace'? Not sure if purposeful but this reads like a pisstake. At a glance I genuinely thought this was a CG project. https://t.co/baGY0auKFm

Look, I’m sure everyone at Marvel has the best of intentions but by god read the room on naming two black NB characters Snowflake and Safespace

heres to snowflake and safespace and their long and illustrious career of appearing in like the first four issues of this event comic, then being relegated to background characters, and then reappearing in 15 years time on a "marvels top ten dumbest characters" listicle

The first non-binary superhero in Marvel and they named them SNOWFLAKE.

No, this is not fake.pic.twitter.com/a5GYz8XBjI

mfs are named SNOWFLAKE and SAFESPACE this is absolutely bait for the “get woke go broke” people because they know that’s the only way this will get publicity you cannot convince me otherwise pic.twitter.com/YhC89wgHPW

The New Warriors #1 is set to hit shelves on April 15th.

What do you think? Do you think the team will last long? Are you going to pick this up? Let us know below!