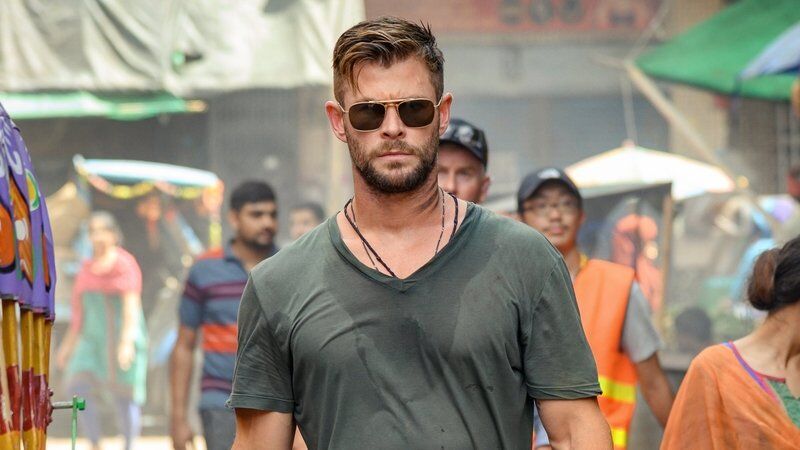 Chris Hemsworth has delivered remarkable charm and presence as Asgaard’s mightiest hero Thor in the Marvel Cinematic Universe, but his career outside of that has been hit or miss. While he’s often been capable as a supporting funnyman (Ghostbusters and Bad Times at El Royale), his starring vehicles have been critical and financial disappointments (although I’ll still defend Michael Mann’s Blackhat till my dying breath), aligning with projects that never utilize his movie star talents. Now starring in the Netflix actioner Extraction, Hemsworth flexes his muscles as a capable action star in a shamelessly entertaining throwback to the days of 80’s machismo genre vehicles.

Extraction follows Tyler Rake (Hemsworth), a jaded gun-for-hire who is given the task to extract the son of a crime lord. What appears to be a straightforward mission becomes complicated when Rake is betrayed, leaving him and Ovi (Rudharksh Jaiswal) on the run from another dangerous crime boss.

Extraction certainly doesn’t score points for originality, yet credit to director Sam Hargrave for making the most out of this cookie-cutter set-up (screenplay written by Avengers helmer Joe Russo). Using his experience as a proficient stunt coordinator, Hargrave unleashes an onslaught of creative techniques to make each setpiece sing. Whether it’s a twelve-minute “one-take” sequence that drifts from the streets to tight corridors or inventively constructed hand-to-hand combat (Rake slams a guy through a wall to kill someone else), there’s far more inventive detail than your typical actioner.

It’s a joy to see Hemsworth settle into the role of a brawny action star, carrying this title with poise and charisma. Even as he’s stuck in a generic archetype as the fearless, yet tortured mercenary with a heart of gold,  Hemsworth sells the character’s flawed humanity with dramatic weight. He also owns the cheekiness of the action star title, similar to genre forefathers Sly Stallone and Arnold Schwarzenegger, capturing the over-the-top machismo moments with sincerity while garnering a few laughs along the way.

While there are shades of a more self-aware movie (Rake jokes about his hokey name), this title still suffers from the cliches that have plagued the genre. Russo’s script makes an effort to give some of its Indian characters dimension, but much of the script has an uneasy white savior complex that leaves a sour taste in the audience’s mouth. The orientalism feels just as dated as the action tropes that hold Extraction back, as the script fails to add personality to its workman-like approach.

That being said, Extraction has enough clever craftsmanship to make up for its blemishes, offering a relentless thrill ride that satisfies audience’s ich for summer spectacle.