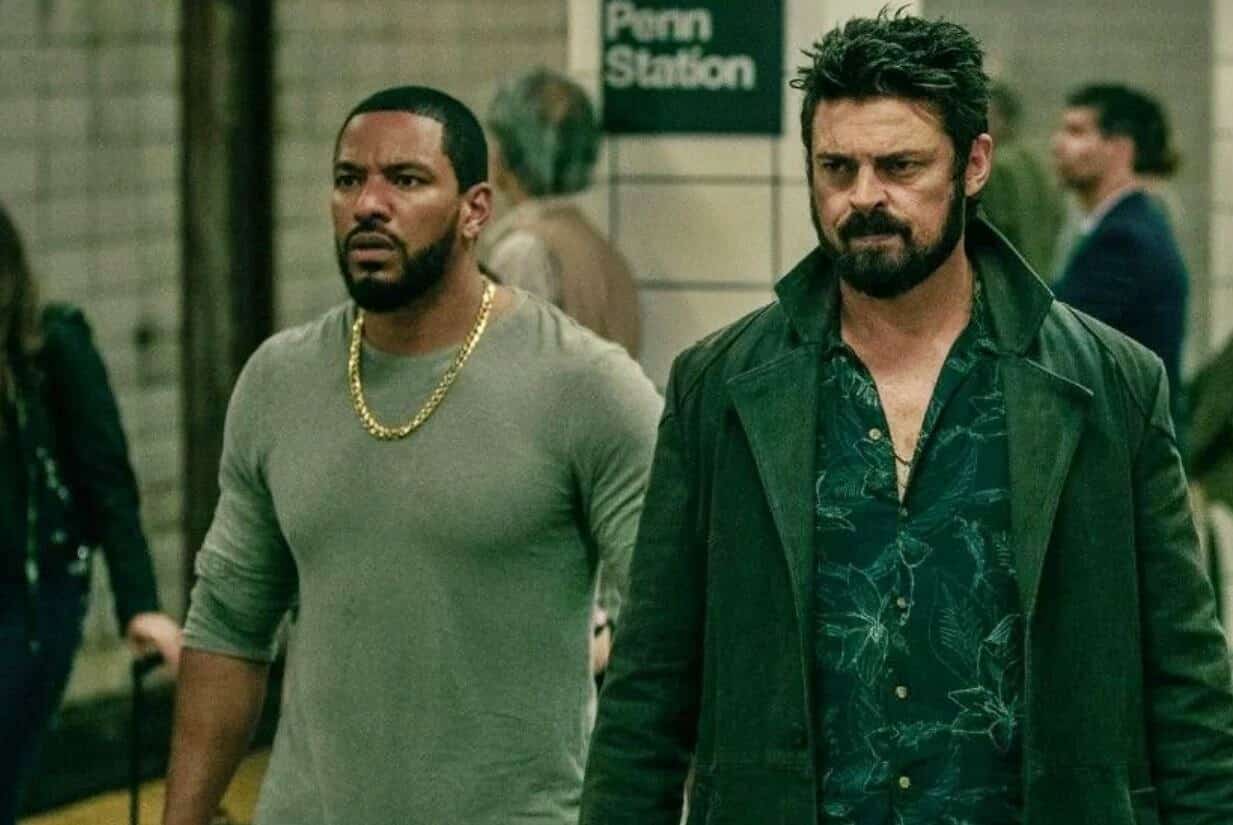 Welcome folks to our first day of exclusive news from Amazon’s Original series The Boys. That’s right. I had the pleasure of talking with the cast and crew behind the hit show. A few interesting tidbits of information came from my time with Karl Urban aka Billy Butcher and Las Alonso aka Mother’s Milk.

We discussed many things – including character changes from the comic book to television, that big Becca reveal at the end of season one, and yes, an update on Karl Urban’s involvement with Judge Dredd: Mega-City One.

Las, you have become the heart of The Boys and trying to keep everybody together. Was that always going to be the character’s part in the show?

Las Alonso: Mother’s Milk role from the source material was more of kind of the plan or the brainiac, the OCD-leaving-no-detail-that-isn’t-checked-two-or-three times over again. I think that what’s evolved in our show is that he’s become in many ways, a voice of reason for Butcher, a conscience for Butcher, a reminder to Frenchie that his mistakes of the past don’t have to keep repeating. Stay on track, stay focused, focus on the mission. This is what we’re here for and he’s the nurturer to Huey. So in many ways, he’s kind of like the connection to our humanity that speaks to the audience.

Las Alonso: Yeah. It’s a window to the other characters, humanity as well, you know? So, I had a tremendous amount of fun being that. In many ways, it’s kind of like The Boy’s therapist. But it really opened up the channels for some really good conversations between Butcher and my character. And you really get to see how close these guys are, and the fact that when shit hits the fan, who do you trust? And that’s each other, regardless of all the mistakes that we may make in our everyday lives.

This next one is for Karl. How much of Butcher’s motivation has changed since that big Becca reveal at the end of season one?

Karl Urban: Well, the revelation at the end of season one that Becca Butcher, who’s been missing for seven years and by many presumed dead is, in actual fact, alive is a game-changer for Billy. It really changes the course of his trajectory, 180 degrees. And while Butcher is still hell-bent on bringing down Homelander and bringing down The Seven; his focus now primarily becomes reuniting with his wife, rescuing his wife. The Billy Butcher, we find at the beginning of season two is somewhat unhinged and he’s vulnerable. He’s a hunted fugitive, like the rest of The Boys. They’re all wanted by the FBI and they need each other and they need each other at a time when they are perhaps more fractured than ever. At the end of season one, Billy turns his back on The Boys and so their union is fraught with a lot of conflict. But, you know, in the spirit of great drama, they have to learn to work together in order to move forward.

Las Alonso: So, you definitely are going to explore that more. Primarily because Butcher abandoned Mother’s Milk and the rest of The Boys at the end of season one. And so when he comes back on board, there is a certain level of trust, regaining the trust that he has to earn now. And Mother’s Milk really holds Butcher’s feet to the fire when it comes to that and when it comes to not abandoning his contract that he made when he brought Huey on board. Huey’s there because of Butcher. You can’t just walk out on the kid now. He’s your responsibility, you know? So he really rides Butcher’s conscience and forces him to not forget his humanity. Even though it’s buried deep, deep, deep within all the shit that he’s gone through. I think that the only reason why Mother’s Milk can have this conversation with Butcher, because deep down inside, Butcher brought them on board to remind them of that. Knowing that once he gets in this battle, he’s going balls to the wall. There really are very few people that could contain Butcher and you don’t contain him by physically trying to contain him. You contain him by trying to appeal to his human side.

The tension in the interaction with Butcher and Huey seems to be growing. Is that tension gonna possibly explode in season two or maybe Huey might try to take over as the leader of The Boys?

Karl Urban: Yeah, it’s a growing tension that explodes in your face. In a fun and positive way. In season one, the relationship between Huey and Butcher was somewhat of a brotherly mentor relationship. And at the end of season one, Huey Campbell gets to see that Butcher is a flawed human being and makes bad choices a lot of the time. And so, he holds a lot of resentment against Butcher for that. I think the wonderful growth that occurs this season between those characters is about really finding a place of acceptance and accepting each other. In this season–in general–it tests all of the relationships and we get to have a deeper understanding about all the characters and where they come from and what they mean to each other. At the same time, the stakes just get raised continually. There’s another log on the fire. What I love about The Boys is they’re always scrambling, they’re always out of their depth, and there’s this heightened kind of reality that is just so much fun to play that it really is truly diabolical.

So, Las, your interaction with Frenchie was really authentic. Is any of that was ad-lib or was that more of the writers knowing the characters that well?

Las Alonso: Some of the stuff is definitely originating with the writers. They kind of set the stage, but once they yell “action”, wherever the scene goes, it just kind of goes. In season one there was the height of our tension with each other because Frenchie and Mother’s Milk had not seen each other since they had their falling out. And Mother’s Milk was just waiting to run into him one day again, and it would be on, on sight. In season two that tension now has decreased because they had that moment in the jail, where they had that kind of “olive branch” moment. And while there’s still a little bit of tension, they at least have agreed to work together to get out of this screwed up situation. What you’ll see in later on in season two is the backstory that caused the tension in the first place. And you’ll actually get to see us before there was tension. When we actually we’re really good friends. So, that’s going to throw people in for a loop too. Cause when Frenchie is your friend, he’s very French, very French.

So, the last question is for Karl. Rebellion CEO, Jason Kingsley came out and said, “Mega-City One is written and ready to go” and he wants you to come back as Dredd. The people at our site petitioned for a Dredd sequel. My editor in chief, Frank Palmer, got it started and we’re all huge fans of your work, especially Dredd. So, have you been in contact with anybody involved with the production or have talks at least started for you to return as Dredd?

Karl Urban: Well, listen, it’s very, very early to get into any specifics on that, but I’ve gone on the record before saying that I would love to come back and be a part of that world and tell more Dredd stories. There is just a plethora of great, great stories within the Judge Dredd universe. I think that Jason [Kingsley] and his team – I think that the legacy of Judge Dredd is in great hands. And if I get the opportunity to work with those guys, you can bet your bottom dollar I will be there – because I think that it would be just a real rich and rewarding experience for, not only for us to collaborate, but for the fans. So, if that happens, that’d be fantastic and for whatever reason – and there are many – if it doesn’t happen, then I wish them the best, and I can’t wait to see what they do.

Check back here at ScreenGeek.net for Day 2 of our interviews with the cast crew of The Boys.