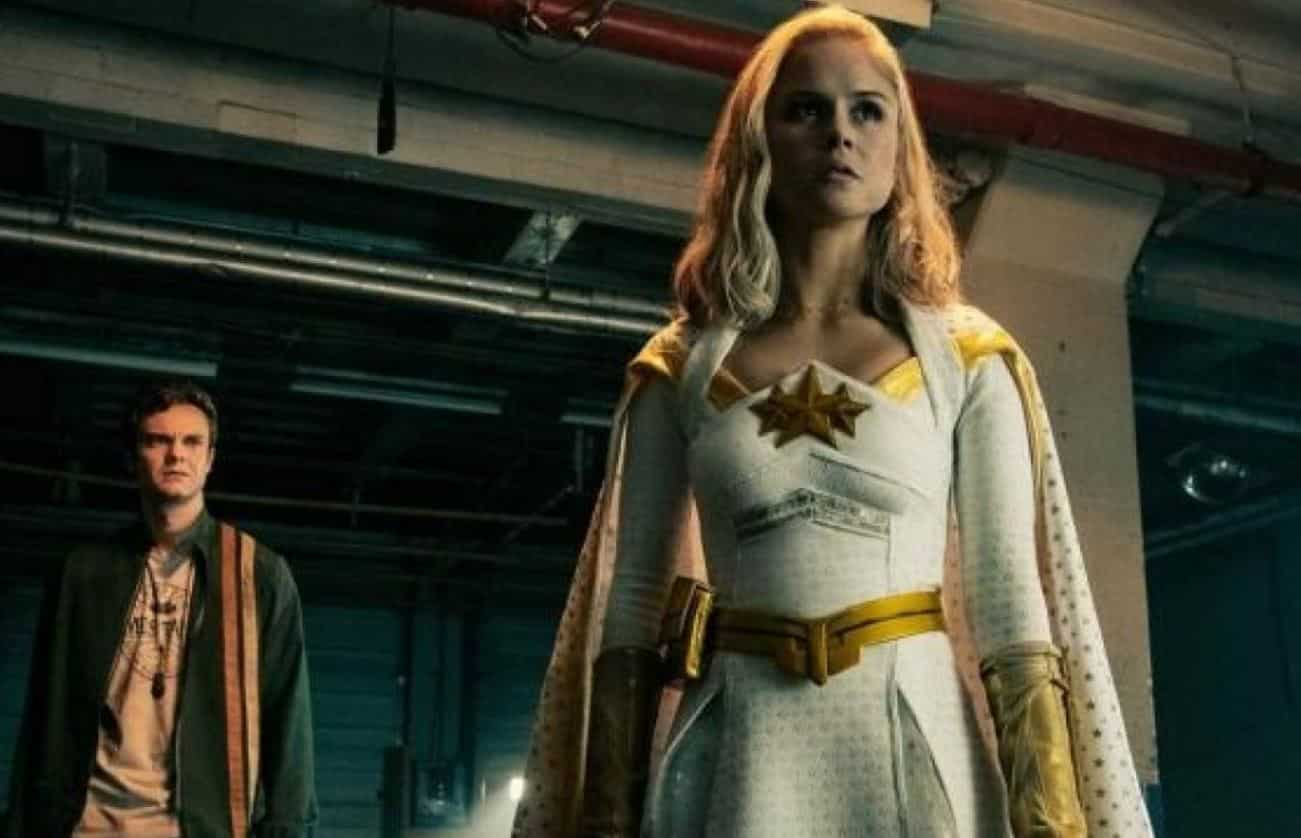 Hello there, you delightful c*&ts. Welcome back for another day of ScreenGeek exclusive interviews with the cast and crew of Amazon’s Original series, The Boys. In this roundup, I had the pleasure of speaking to Jack Quaid, who plays Huey Campbell, and Erin Moriarty, who plays Annie January/Starlight.

In our talks, Quaid and Moriarty discuss the shaky relationship between Huey and Annie, a tender moment between Starlight and Queen Maeve, and a few hints of what’s to come in season two.

So, Erin, your character, Annie, finds out Compound V and that discovery turns her world upside down. How did you prepare to come into the second season of The Boys as less of a goody-two-shoes and more of a badass?

Erin Moriarty: You know, the benefit of having done the entire season is that I lived through her and what she went through. So, the process and the transformation of her going from a “goody-two-shoes” to being a little bit more hardened and having adapted to our world; it wasn’t super difficult for me to do because I acted my way through it. I really had to kind of put myself in her shoes, in her psyche, and go through what she went through. So, by the time season two came around, the funny thing is—when I kind of did the homework of preparing to return and tap into her again, I just have to go back to the emotional place I was in when Huey broke my heart. And when my mother broke my heart and that just kind of—doing the acting job of season one was the homework for me to be able to build sort of the new version that we see of Annie in season two. So, really it was a matter of going through season one and just doing the homework to prepare and reminding myself of that, of what she went through and, putting myself in the imaginary “as if”. As if I had gone through what she’s been through and I was forced to adapt and I think filming an entire season helped me prepare more than anything.

There’s a conversation Huey had in season one with Mother’s Milk about the detonator and how it gave you this rush. Given the events of season one, is Huey starting to lean more to Butcher’s POV of how he handles the Supes?

Jack Quaid: Yeah, there’s always that danger. I think with Huey it’s because this whole thing started for him with a Supe killing the woman that he loved the most. But, I think Starlight and the scenes that Huey and Annie share, in season one, help him to see that not all—Butcher’s essentially prejudiced against superheroes and Huey is now seeing that’s more of a gray area. There are Supes that are downright psychopaths, but there are also superheroes that are very caring and very kind, and in the case of Starlight, one that Huey fell for. So, he does have, especially in season one, he has a temptation to kind of go towards the darker side. Especially when he’s pretty directly pursuing revenge for Robin and especially in those first few weeks after she died. I don’t think he’ll go full Butcher necessarily, but the danger of falling into that way of his thinking is always there and present for him.

Now this question is for both Erin and Jack. How’s the relationship going to change in season two between Annie and Huey? Is it going to be stronger or is going to be a bigger strain on the two characters?

Jack Quaid: There’s nothing but strain this season.

Erin Moriarty: Well, for it to be stronger, I think—

Jack Quaid: Yeah. I mean, Huey knows how bad he messed up. I mean, he kind of had to lie to her in a lot of ways, but he wants nothing more than to be together with her. But he has to kind of put that aside because there are bigger things at stake.

Erin Moriarty: I just think that the only—for it to become stronger, at least in the beginning, is impossible. They have a lot to rebuild. I think the question is, now that Annie knows all that she knows about Huey and he’s really sort of, laying his cards out for her. Does that enable her to trust him a little bit more and then if it does, are they able to rebuild? And if they do get back together, it’s going to be an entirely new relationship because chances are different. So those are the questions and if they’re even able to do that, you’re just going to have to watch to find.

At the end of season one, Starlight was helping Huey and The Boys get out of that sticky situation. Is she going to be more of a secret agent for The Boys or if there’s going to be another confrontation with a member of The Seven?

Erin Moriarty: Well, if those are your questions, I think season two is going to satisfy you. I can’t go into details, but I will say that your questions are good foreshadows for season two.

Jack, Robin was the motivation for Huey to seek out revenge and he started pushing that aside being when he wanted to be with Annie. What’s really keeping him to stick around with The Boys since there’s no pursuit for revenge?

Jack Quaid: Right. Well, I think at this point he’s in it. He’s in this world, whether or not he likes it or not. I mean, yes. I think in season one, his flip, that you might call it—he basically realized that Robin wouldn’t want him to pursue revenge like this. She wouldn’t. I don’t think she would think that violence begets more violence. I don’t think that’s where she would go with it, but in season two, like I said, he’s stuck there and he’s wanted by the law. And he stuck with these people, with The Boys, whether or not he likes it. And I think what he brings to the team in season two is kind of a middle ground. Like, he knows that Vought is corrupt. He knows that some of these superheroes are very, very bad people. However, he knows from meeting Starlight, that they’re not all bad and he is trying to, I think, solve his problem in the most humane way possible. In a way that doesn’t involve the death of anyone, but with Billy Butcher at the helm, doesn’t always go that way. So, he is upset about Billy’s return just to say the least.

Annie had this really touching and moment with Queen Maeve when she said, “Hey, be the goody-two-shoes and don’t be like me.” Is Annie going to have another connection with any other members of The Seven?

Erin Moriarty: Yeah. I mean, the interesting thing about The Seven is that you dive deeper into season two—pun intended—is that you find out a lot about them as superheroes and you find out a lot about why they are the way they are and how a lot of them are kind of damaged goods, that they are just acting out because they’ve been conditioned so poorly and they come from such a toxic background. So, I would say that Annie does have a couple of bonding moments with superheroes that you would not anticipate. But I think the show highlights, just when you think someone’s bad, you find out a redeeming quality about them and you realize that you kind of can’t make assumptions about anyone. So, we have some with Maeve, and then she has some with other characters that are surprising, but it was cool to continue to explore her dynamics with these other seven members.

That’s all for today, folks. Come back tomorrow for another exciting exclusive from ScreenGeek as I continue my interviews with other cast and crew of The Boys.