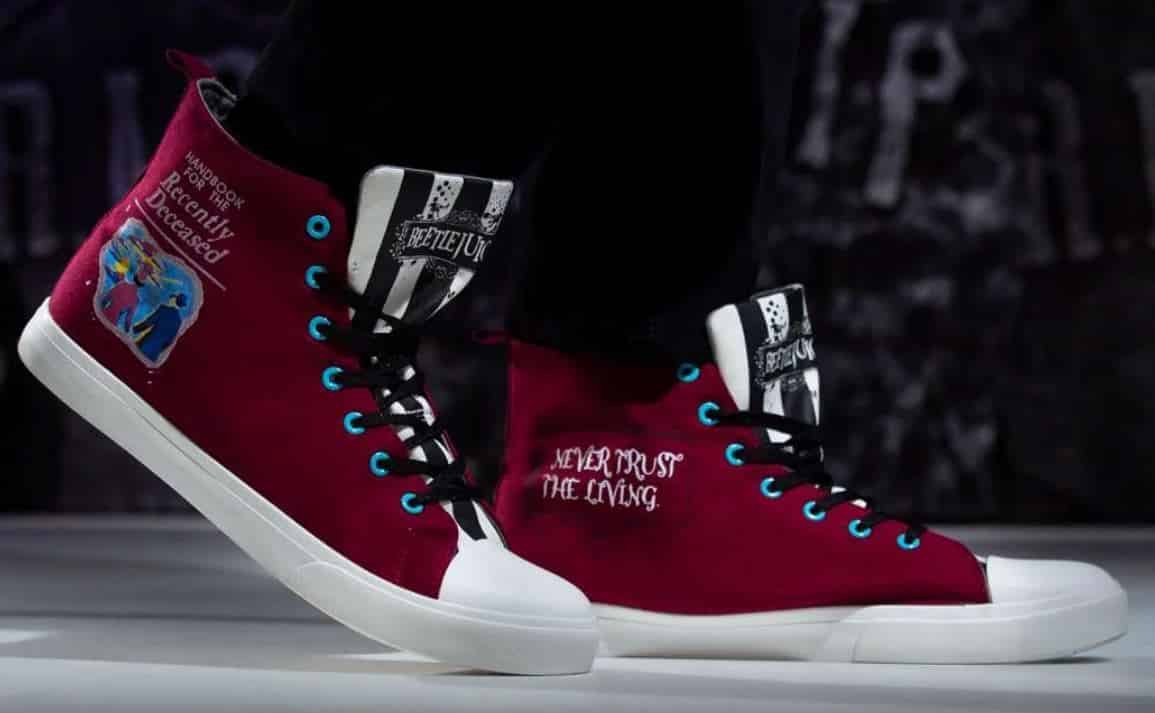 Tim Burton’s Beetlejuice has remained a pop culture phenomenon for decades now. The film has continued to generate merchandise and the like, and these new sneakers are just the newest items to be released under the Beetlejuice name. As you can see for yourselves down below, the sneakers come in two different styles. One such style is modeled after the iconic Handbook for the Recently Deceased, a prop that any Beetlejuice fan will immediately recognize. Meanwhile the other is inspired by Beetlejuice’s suit and the iconic Sandworm design. Both should no doubt catch the attention of any Beetlejuice fanatic.

And, what’s also a plus for these awesome looking sneakers, is that they come at a stellar low price! You can order the pair modeled after The Handbook for the Recently Deceased in unisex sizes at Fun.com for $39.99. As detailed:

“Whether you’re a living soul still trekking through life, or you’re one of the recently deceased, you’ll need proper footwear! These Beetlejuice Recently Deceased Sneakers are officially licensed from the 1988 movie. The unisex shoes have lace-up fronts and a maroon exterior that’s the color of The Handbook for the Recently Deceased. They even have the cover art of the book on the side. Each tongue features the classic Beetlejuice logo on them, making them perfect for any fan of the classic Tim Burton film. (Note: shoes will not help you outrun one of the Sandworms on Saturn.)”

Likewise, you can order the striped pair inspired by Beetlejuice’s trademark suit and the iconic Sandworm design also for $39.99 at Fun.com. Likewise, these striped sneakers have been given the following details:

“Well, it turns out that write his name 3 times won’t summon the ghost with the most! It has, however, resulted in this magnificent pair of shoes. These Unisex Striped Beetlejuice Sneakers are officially licensed  Beetlejuice shoes from the classic Tim Burton film. The exterior of each shoe is designed to look like Beetlejuice’s suit and the side has Sandworm from Saturn patch on it. Just slip them on, and you might just feel like getting into the career of bio-exorcism yourself! (Note: saying his name 3 times won’t actually cause the shoes to materialize in your home.)”

At these prices, it’s hard to resist such awesome shoes or outright collectors’ items. What’s more, the store also contains a wide variety of other merchandise items inspired by the movie Beetlejuice. So there are plenty of matching items to purchase if you end up picking a pair or both pairs of Beetlejuice sneakers. It really is nice to see such items available for purchase. It just goes to show how strong the brand is even after all these decades since the first film’s release. Of course, there are always the possibilities that some kind of sequel could eventually manifest itself.

Continue Reading
You may also like...
Related Topics:Beetlejuice, Horror