It was previously revealed that former MMA fighter/actress Gina Carano was fired from the production of The Mandalorian after making a series of controversial tweets on Twitter. She was further cast out from Disney after an episode of Running Wild with Bear Gryllis she participated in was removed from their release schedule. In fact, her losses go even further as she was even dropped by her talent agency, UTA. But according to the newest development, it appears that things aren’t stopping there. Apparently Twitter has now censored her account with a “Sensitive Media” warning. If you’re unaware, “Sensitive Media” warnings are given to accounts that post “violent, hateful, or adult content.”

More specifically, Twitter applied the “Sensitive Media” warning with an alert that reads:

“You’re seeing this warning because they Tweet potentially sensitive images or language. Do you still want to view it?”

Interestingly, however, aside from voicing her political options – her account doesn’t actually have any “violent” or “adult” content. As such, it seems she was censored for “hateful” content. But even that is a stretch. Especially considering a variety of her posts, including one which was recently visually restricted, were the complete opposite of hateful. This particular post, via Bounding Into Comics, showed a group of diverse hands locked together. While that should be considered wholesome, if anything, it appears Twitter marked it as “potentially sensitive content.” 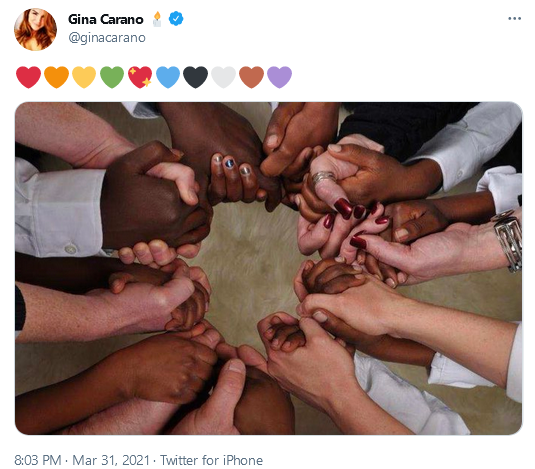 It appears that Gina Carano doesn’t even understand why Twitter would mark her content in such a way, and she decided to respond in a passive manner. She posted a selfie of herself with a very short but noticeable caption:

Obviously she’s having a bit of fun with pointing at Twitter’s view of her account. Overall, though, it seems Gina Carano is hitting quite a streak of bad luck lately. But that hasn’t stopped Carano in the slightest. In fact, she’s been working on new projects already – one of which is reportedly akin to Star Wars. So while people might be trying to cancel her, she’s doing her best to stay afloat.