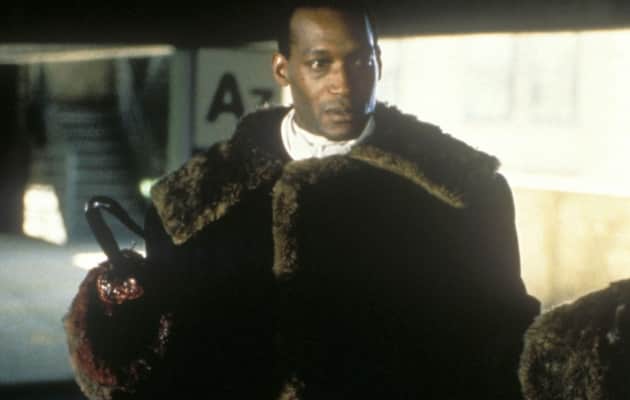 While the connections in the upcoming Candyman film are vague, it does appear to be a sequel to the original horror classic. Of course, one thing remains to be seen – whether or not Tony Todd is in the film, and just how far his involvement could go. We’ll probably have to wait until the release of the film this month to know for sure – but a TV spot has been making the rounds which does tease his participation. In particular, the Candyman TV spot features a line of dialogue that appears to be coming directly from Tony Todd himself.

As you can see below, the voice which seems to be Tony Todd says the following line in the Candyman TV spot:

“I heard you’re looking for Candyman,” the line goes.

As fans of the original Candyman should know, it seems to be a spin on a similar line voiced several times in that film. This, along with the fact that it sounds like Tony Todd, definitely seems to indicate that he’ll be playing a part in the new film and mythology. But, as stated above, we’ll probably have to wait until the film is in theaters to know for sure. This new movie is no doubt an ambitious take either way, however, so hopefully it lives up to expectations. Which, considering the quality of the original two Candyman sequels, shouldn’t be hard to do.

“For as long as residents can remember, the housing projects of Chicago’s Cabrini Green neighborhood were terrorized by a word-of-mouth ghost story about a supernatural killer with a hook for a hand, easily summoned by those daring to repeat his name five times into a mirror. In present day, a decade after the last of the Cabrini towers were torn down, visual artist Anthony McCoy and his girlfriend, gallery director Brianna Cartwright, move into a luxury loft condo in Cabrini, now gentrified beyond recognition and inhabited by upwardly mobile millennials.”

“With Anthony’s painting career on the brink of stalling, a chance encounter with a Cabrini Green old-timer exposes Anthony to the tragically horrific nature of the true story behind Candyman. Anxious to maintain his status in the Chicago art world, Anthony begins to explore these macabre details in his studio as fresh grist for paintings, unknowingly opening a door to a complex past that unravels his own sanity and unleashes a terrifyingly viral wave of violence that puts him on a collision course with destiny.”

The new Candyman film is currently scheduled for a theatrical release this month on August 27, 2021.