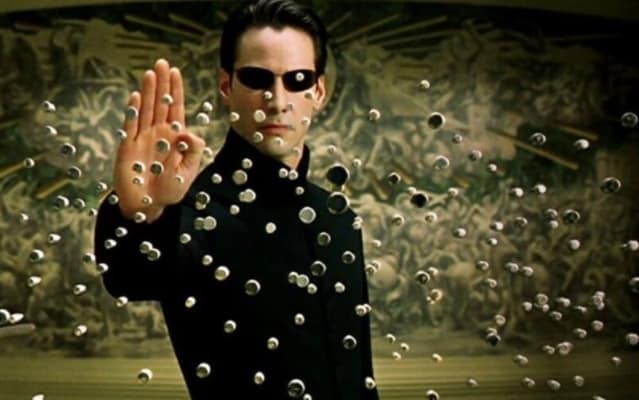 Warner Bros excited fans at CinemaCon with an unexpected trailer for The Matrix 4. With this trailer came the official title for the highly anticipated sequel, which is now titled The Matrix: Resurrections. While the trailer for the film is still unavailable online, a description for the footage was released.

As described via Deadline, the trailer included the following scenes:

“The trailer begins with Neil Patrick Harris talking to Keanu Reeves’ Neo. A near future San Francisco. It appears that Neo is trapped in a humdrum world, much like his first self in the 1999 movie. He’s just not getting his surroundings.

‘Am I crazy?’ asks Reeves’ Neo. ‘We don’t use that word in here,’ says Harris’ therapist.

Reeves comes in contact with Carrie Anne Moss’ Trinity in a cafe: ‘Have we met?’ she asks Neo.

A shot of blue pills spilling into a sink, as Jefferson Airplane’s ‘White Rabbit’ song plays.

Then a shot of Neo distorting into an old man in the mirror. A younger Morpheus tells Neo ‘time to fly,’ handing him a red pill.

Then a lot of jumping, a lot of twists in midair, karate and all the acrobats we expect from a Matrix movie.”

It sounds like The Matrix 4 will stay faithful to the styles of the original trilogy, albeit with a fresh perspective and new spin on the material. Especially considering the apparent amnesia that will play a role for Neo and Trinity, this could be a very interesting sequel indeed. Hopefully we’ll have more details on that front soon – and perhaps even a trailer. As for now, though, there isn’t any word on when we can expect the trailer. Unfortunately it seems this teaser was exclusive for CinemaCon. But one can hope that some kind of look will be revealed soon online.

Lana Wachowski directed the film from a screenplay she wrote with David Mitchell and Aleksander Hemon.

Continue Reading
You may also like...
Related Topics:Keanu Reeves, The Matrix, The Matrix 4, The Matrix Resurrections, Warner Bros