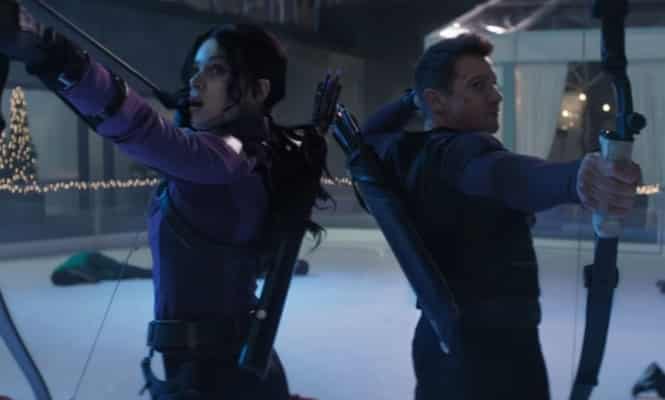 The first trailer for the upcoming Hawkeye series for Disney Plus starring Jeremy Renner as Clint Barton and Hailee Steinfeld as Kate Bishop has been released. The series follows Barton after the events of Avengers: Endgame as he’s getting adjusted to having a normal life again after the snap. As the trailer shows, it doesn’t appear that he will be able to do that, as his enemies have other plans.

As you can see from the trailer, the show will focus on Barton taking Kate Bishop under his wing – likely setting the stage for her to become the new Hawkeye, as Marvel fans have already seen in the comics. Something noticeably absent from the trailer is an appearance from Florence Pugh (after the events of Black Widow) but you know that Marvel Studios likes to keep some of the details hidden to make fans continue to guess.

When discussing the show, Jeremy Renner recently discussed how he took a role as Steinfeld’s mentor off the screen as well:

“[Kate is] a 22-year-old kid and she’s a big Hawkeye fan. She has a wonderfully annoying and equally charming manner about her, because she’s such a fangirl of Hawkeye. The relationship grows from that, but the biggest problem for Clint is Kate Bishop and the onslaught of problems that she brings into his life.”

“Outside of acting in the thing, I was protecting her and giving her the CliffsNotes on how it goes with this kind of filmmaking: Green screen, superhero life, all that stuff. I just wanted to protect her, because there’s a lot of physical stuff. She’s a wonderful actress, a wonderful human, and I can’t wait to see all the cool stuff that she’s able to do.”

Disney+ and Marvel Studios invite you on an unexpected holiday getaway, unwrapping the official trailer and teaser poster for Hawkeye, a new series set in post-blip New York City. Former Avenger Clint Barton has a seemingly simple mission: get back to his family for Christmas. Possible? Maybe with the help of Kate Bishop, a 22-year-old archer with dreams of becoming a Super Hero. The two are forced to work together when a presence from Barton’s past threatens to derail far more than the festive spirit.

The first season of Hawkeye, which will be eight episodes, is set to hit Disney Plus on November 24th.

Continue Reading
You may also like...
Related Topics:Disney Plus, Hawkeye, Marvel, MCU