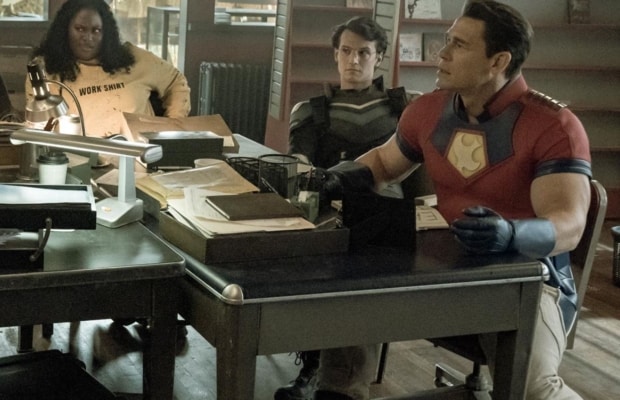 James Gunn’s The Suicide Squad has been a huge success for WB and the DC films, bringing new life into the roller coaster that has been the DCEU. The group of ragtag villains turned reluctant heroes garnered tons of fans. One of the stand out performances was from WWE legend and Hollywood rising star, John Cena. Gunn apparently knew this would happen – as during the pandemic, the writer/director took his down time in stride and wrote a whole series for Peacemaker, Cena’s character in the film. Once WB got to see the first cut of the film, they were so excited by what Gunn brought to the table that they wanted more. Thus, the Peacemaker series for HBO Max was born and is now set for a January 2022 release. Now, the first official image has been released!

James Gunn took to Twitter to share the Entertainment Tonight ‘First Look’ at the series, which saw the not-so-happy Team Peacemaker conversing at a table. This includes our first look at Freddie Stroma as Vigilante. For those who remember the film (if you didn’t watch it, SPOILER ALERT), Peacemaker somehow lived after being shot in the neck by Bloodsport and then Jotunheim collapsed. Now, Amanda Waller wants Peacemaker again to help save the world, albeit to her own ends.

Not too much is known of this series, but we are for sure getting the first trailer during DC Fandome, the virtual DC convention that’s coming soon. What we do know is that Chukwudi Iwuji is group leader Murn, a mercenary who reports to Waller, Danielle Brooks is Adebayo, and Freddie Stroma round out the cast that also includes Cena and others returning from the film.

James Gunn is bringing his unique style to DC and is really helping to re-establish the film division as something that could possibly rival the Marvel Cinematic Universe. By bringing his comedic touch and hyper violent lens to his natural appreciation for the comic book genre, fans are finally getting what they always wanted on screen. Come this January, we’re getting a whole lot more in our homes with Peacemaker on HBO Max!

Are you excited for Peacemaker? Let us know in the comments below!