The True Story Behind ‘The Exorcist’ Horror Movie 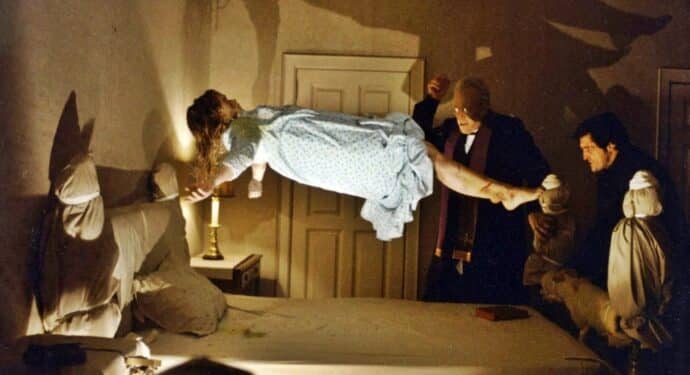 It goes without saying that director William Friedkin’s 1973 film The Exorcist is one of the most celebrated and perhaps horrifying motion pictures ever released. The movie was based on a novel with the same name by author William Peter Blatty, and what’s more, his novel was inspired by a series of reportedly true events. Specifically, The Exorcist was based on the true story of a 13 year old boy reportedly named Roland – sometimes believed to be named Ronald – who was supposedly possessed and later subjected to a real life exorcism.

The true story which inspired The Exorcist, as recounted by AllThatsInteresting, begins in Washington, D.C. during the late 1940’s. After Roland’s Aunt Harriet died, he was incredibly upset. She had apparently been a very spiritual woman and taught him such things like using Ouija boards to communicate with spirits. In the time after her death, around January 1949, Roland would face awful scratching sounds from the walls of his room. The strange occurrences continued when not only would water leak from inside the house, but Roland’s own mattress would suddenly move by itself.

Roland’s family struggled to find help with the strange occurrences. They contacted a variety of medical professionals and even their own Lutheran minister for guidance. Their minister ultimately sent them to speak with the Jesuits for help.

By February 1949, Father E. Albert Hughes requested permission from his superiors at the Catholic Church to perform an exorcism on Roland. During the exorcism, Roland was tied down on his mattress – and at some point ripped out one of its springs to use as a weapon. He subsequently sliced Hughes across his shoulders, forcing the priest to prematurely stop the exorcism.

Apparently after this first attempt failed, strange markings began appearing on Roland’s body. They were red scratches and one of them formed in such a way to spell out “LOUIS”, which Roland’s family took as a sign to seek out their relatives in St. Louis.

As it turned out, one of their relatives was attending St. Louis University where they were able to introduce Roland’s immediate family to Father Walter H. Halloran and Rev. William Bowdern. They eventually agreed to perform an exorcism on Roland.

In order to perform the exorcism, Father Walter H. Halloran and Rev. William Bowdern brought with them several assistants. By March 1949, they all arrived at Roland’s house on Roanoke Drive. They all witnessed the same occurrences mentioned above, including the scratches and moving mattress.

It was also during this time that they noticed Roland’s demonic behavior mostly occurred during the night, where he would sometimes scream or yell in a guttural voice. He would also react negatively to any of the priests’ holy objects. As time went on, Roland’s scratches would continue to form into different shapes. At one point a large “X” formed over his chest, which seemed to indicate the possibility that he was possessed by a number of 10 demons.

Nevertheless, the exorcisms continued every night. By March 20, his parents decided to take him to Alexian Brothers Hospital in St. Louis after he’d simply urinated over his bed and lashed out at the priests during another failed exorcism.

It was on April 18, the Monday after Easter, that Roland awoke in his hospital room with a series of seizures. The priests responded by placing holy items like crucifixes and medals over his body. They then called upon St. Michael to battle Satan himself in an effort to save Roland’s body. After seven minutes, Roland seemed to be out of his demonic state, and simply stated that “He’s gone.” After this, Roland apparently lived a normal life and the supernatural occurrences stopped happening.

Obviously William Peter Blatty’s novel The Exorcist wound up being quite different from the story that inspired it, and thus William Friendkin’s film adaptation strayed even further from the events of Roland and his terrified family. Nevertheless, The Exorcist still managed to become one of the most successful horror films ever created.

As for Roland, whose real name is believed by some to be Ronald Hunkeler, there isn’t much else known about his life after the above mentioned story. His age would be somewhere in the 80’s now days assuming he’s still alive. It also was stated that he not only married at one point in his life, but that he also had a son named Michael after the saint that saved him.

The two main priests responsible for his exorcism are both dead. Bowdern died in 1983, while Halloran died in 2005 after a battle with cancer. In addition to this, several of the locations from the story no longer exist in this day and age. Roland’s room at Alexian Brothers Hospital was sealed up following his exorcism, and the entire hospital would later be demolished in 1978. The family’s house in Maryland was likewise demolished.

But as long as The Exorcist remains one of the most iconic horror films ever made, the true story that inspired it will similarly never die.