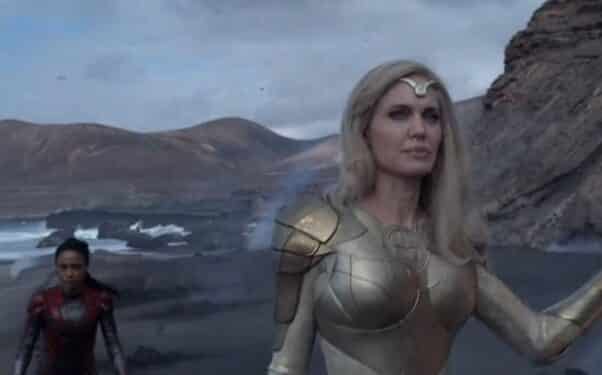 The Marvel Cinematic Universe is expanding exponentially at this point, especially with the multiverse bursting wide open. We are also getting more of the cosmic realm of the MCU happening, firstly with the upcoming Eternals. The immortal heroes who stepped away from humanity will come into our lives in a big way, and they’re bringing Deviants and Celestials along with them. They are also bringing all new powers into the universe, and some new footage gives us a hint at them, including a good look at Gilgamesh’s powers.

The latest footage gives us some new footage, mainly of our new heroes in action. We see the architect of the Eternals, Gilgamesh, use his energy through his fists to double punch a Deviant back. It should be noted that Eternals is supposedly clocking in at 156 minutes, making it longer than even Avengers: Infinity War.

This means that these ten heroes should all get plenty of time for character exploration as well as the story as a whole, including where they’ve been through all of these potential world ending events that they did not help to stop. We will also explore their incredible powers, both in combat and in how they helped a young human species become what it is today.

“When you love something, you fight for it.” Experience Marvel Studios’ #Eternals only in theaters November 5. pic.twitter.com/h3YPgKaJDW

The trailers for this film are definitely promising. Eternals not only has an all-star cast and a great director, but could quite possibly have the greatest cinematography that we’ve seen in the MCU yet. There are already talks of possible multiple Academy Award nominations for this movie, but lets not get too far ahead of ourselves. Let’s just hope that the film lives up to the hype and Eternals is another amazing chapter in the Marvel Cinematic Universe.

Are you excited to see Eternals and explore their story? Let us know in the comments below!