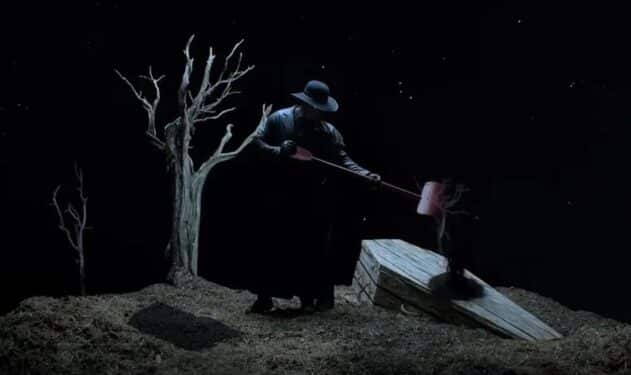 There is typically a very big crossover between horror movie fans and pro wrestling fans. The tend to swim in the same circles and there is a lot of horror elements that make up many sports entertainment gimmicks. Just look at The Fiend, Alexa Bliss’s current gimmick, Finn Balor’s Demon, Kane, The Brood. Of course, there is the most iconic gimmick in all of wrestling, horror related or not, in The Undertaker. The 30 plus year career of Mark Calloway as The Deadman is unparalleled in the sport. Does that translate to the horror film genre, though in Escape the Undertaker, the new horror film from Netflix and WWE?

The movie, a choose-your-own-adventure style horror film akin to Black Mirror’s Bandersnatch, pits The New Day, consisting of Xavier Woods, Kofi Kingston, and current WWE Champion Big E, against the Deadman. They have to escape The Undertaker whilst in a spooky abandoned house. The viewer chooses options for the trio in an attempt to get them out alive.

Besides the fact that the movie is said to be terrible (it has a 4.3 out of 10 on IMDb) – it is also a bit controversial – as you can see below.

Went to watch Escape The Undertaker on Netflix. Didn’t realise it was an interactive TV show. As in you get to choose what happens after each scene. Sounds cool right? But turns out it is absolutely shite.

Escape The Undertaker is an interactive Netflix movie about a deadman portrayed by a racist old white republican hunting down a trio of funny charismatic black men. kind of fucked up if you ask me

With that being said, a lot of people also enjoyed the film:

I really enjoyed “Escape The Undertaker” interactive game. It was lot’s of fun! I already loved the New Day but crap this made me love them even more! pic.twitter.com/CKo5gMUddq

Escape the Undertaker was a looooot of fun! Definitely exceeded my expectations.

Escape the Undertaker is super fun

Escape The Undertaker is currently streaming on Netflix.