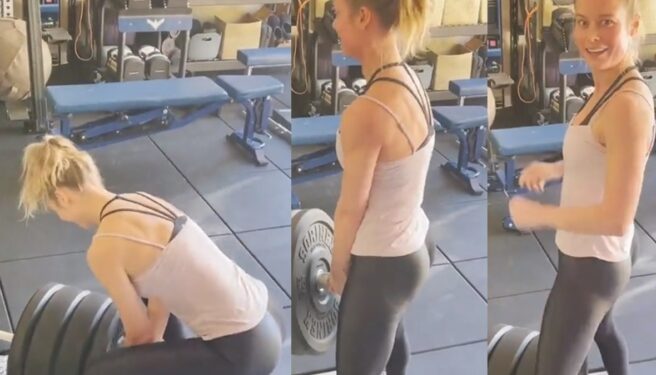 One of the many ways in which the Marvel Cinematic Universe will be expanding is with the upcoming sequel to Captain Marvel, titled The Marvels. The film will once again see actress Brie Larson reprise her role as Carol Danvers, and as she’s previously shown in one workout video, she’s training intensely to return to the role. Now in another new video shared by the actress, it looks like Brie Larson is still deep in training for The Marvels.

The video shows Brie Larson doing some landmine squats, using a decent bit of weight at one end of her barbell. She manages to accomplish six reps of the exercise, something which she wasn’t expecting. As a result, she was quite surprised at the end of the video.

You can see for yourself down below:

Sometimes I surprise myself! Thanks @rise_movement for helping me reach new heights! pic.twitter.com/853WGRKPAT

“Sometimes I surprise myself! Thanks @risemovement for helping me reach new heights!”

It goes to show that being a cinematic superhero doesn’t mean you have to rely on CGI. If anything, Brie Larson has proven that working out for real can be just as beneficial to the role. With so many superhero productions consistently in the works, it’s exciting getting to see the behind the scenes and how many actors and actresses train for these parts. Hopefully we’ll get to see more glimpses into The Marvels in the near future, especially with the film in production.

With its recent delay from 2022 to 2023, however, there might be some time before we get any serious looks at the film. As such, fans can stay tuned to ScreenGeek for updates when we do have them.

Nia DaCosta is directing The Marvels. Aside from Brie Larson, the cast for the film also includes Iman Vellani and Teyonah Parris.

The upcoming film is scheduled for a release date on February 17, 2023.