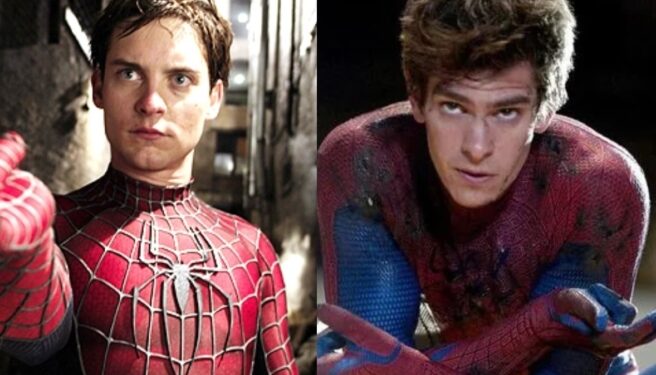 Its been almost two weeks since the release of Spider-Man: No Way Home, and fans are still buzzing over what has become the biggest Spider-Man film of all time. The film brings three generations of Spider-Man together, with Tom Holland’s version of the character finding himself battling against villains from previous Spider-Man franchises. Holland must go up against the Green Goblin, Doctor Octopus, Electro, Lizard, and Sandman.

Of course, he has some much-needed help in the forms of returning fellow Spider-Men Tobey Maguire and Andrew Garfield. The pair’s returns had been speculated upon for almost a year before fans finally got to see confirmation on the big screen earlier this month. The result was one of the most iconic moments in MCU history. However, it turns out that fans almost got a completely different way of seeing Maguire and Garfield introduced into the film from what was seen in the final cut.

Ultimately, Garfield and Maguire were portaled into the film by Ned, who discovered he has the magical gene after putting on Dr. Strange’s ring. This led to a very funny interaction between Garfield, Maguire, MJ, Ned, and Ned’s grandmother. With that being said, according to writers Erik Sommers and Chris McKenna during an interview with Variety, that wasn’t always the plan.

The writers revealed that the Spider-Men were originally to be brought in by an unnamed MCU character as “more of a deus ex machina.”

“They are brought by a Marvel character going, ‘Here are the saving graces and they’re going to help you through this.’ It was just more of a deus ex machina.”

The writing process for the film took place in the middle of the COVID-19 pandemic, making it a rather dark time for production, despite that one of the best things of the year was being created. It draws quite the parallel to the film itself, as Garfield and Maguire – arguable the brightest spot of the entire film – were brought in at the darkest point in the story.

Spider-Man: No Way Home is currently playing in theaters.