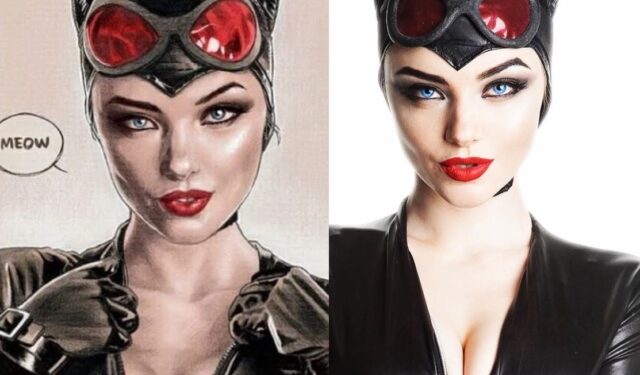 One of the most notorious characters in Batman lore is none other than Catwoman, a thief and often anti-heroine that often gives the Dark Knight a run for his money. Catwoman, otherwise known as Selina Kyle, has gone through a variety of different looks over the decades. This is something she shares with plenty of other Batman characters. As such, it’s always fun to see cosplayers show off with their various takes on Catwoman’s varying appearances. And, as you can see in the below cosplay, this Catwoman look is completely faithfully recreated.

This Catwoman cosplay comes from m_mellu, who took the opportunity to recreate one of Catwoman’s more revealing outfits. Of course, the character is always known to use a bit of sex appeal to get what she wants. So despite some complaints, it’s certainly still a fitting look for Selina Kyle. And aside from the suit which shows off her cleavage, cosplayer M-Mellu also did a great job at recreating Catwoman’s hat and goggles.

As you can see in the photos below:

Catwoman is certainly an interesting character to recreate. There is no shortage of costumes to take inspiration from, with different looks appearing almost everywhere. There are iconic outfits like the one Selina Kyle creates for herself in Batman Returns, in which her costume is covered in imperfect stitches and skin-tight leather. And other outfits such as those featured in Batman: The Animated Series. As such, you can’t deny that m_mellu gave a spot-on cosplay as the character.

With that said, Catwoman is being prepared to make yet another cinematic comeback. This time actress Zoë Kravitz will play the character in the upcoming DC superhero film The Batman. There’s a lot of anticipation for the film, especially to see the actress alongside Robert Pattinson’s take on Bruce Wayne aka Batman. It goes to show just how timeless these characters are, no matter how many iterations they go through.