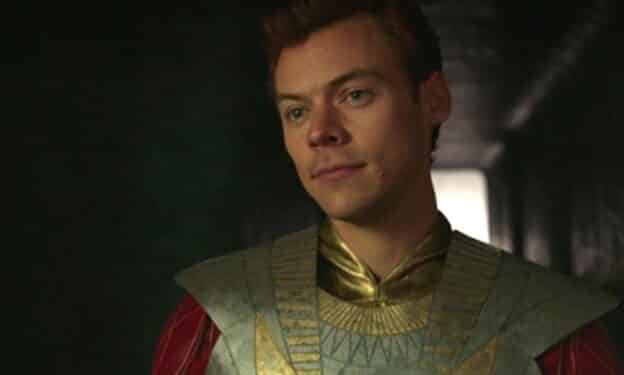 There were a variety of Marvel Cinematic Universe projects released last year. This included the MCU film Eternals, which introduced a group of cosmic beings new to the superhero film and television franchise. As such, the film sets up various stepping stones for the future of the MCU. Interestingly, however, one of these stepping stones – an alternate ending – was removed from the final cut of Eternals. What’s more, it turns out that this alternate ending was actually previously teased on Instagram in an image featuring Lia McHugh and Harry Styles.

This was revealed by actress Lia McHugh in an interview with ComicBookMovie. Apparently the alternate ending for Eternals would have seen the characters lose their memories before leaving the planet to restart their lives somewhere anew.

“It actually worked out really well for me,” regarding working with Harry Styles. “I didn’t end up having a scene with him at all, but in the first version of the script, we filmed a different ending and it was sort of parallel to the first scene in the movie. We shot it on the same day basically and were kind of switching out actors and stuff as it was all the same camera shots, so it was easier to just do it all in one day.”

“We were all on the same sound stage, all ten of us and Harry, and we were going back and forth switching out our characters,” she continued. “Oh my gosh, I was such a fangirl. I was freaking out. I couldn’t tell anyone for the longest time; I wanted to tell all my friends. He actually invited us to a private concert in London and that was the coolest experience ever. He’s really such a sweetheart. It was really fun to get to know him.”

It certainly sounds like it would have changed the overall film and its impact on the MCU quite a bit. The ending they ultimately went with, however, is more than likely the better one for creating new sequels with these characters. As such, we’ll probably see more of these Eternals characters sooner or later.