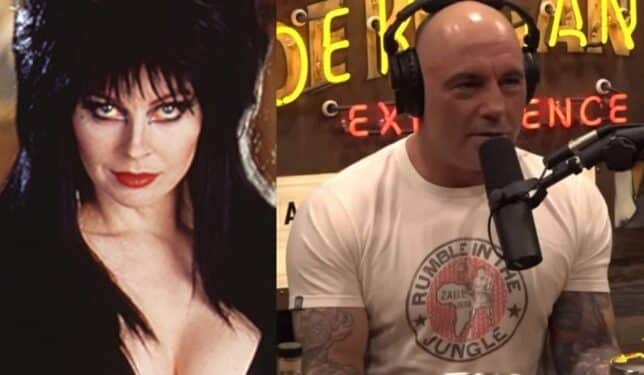 Many celebrities and fans have spoken out against Joe Rogan and his place on the Spotify audio platform. Now Cassandra Peterson, better known as horror icon and host Elvira, has also demanded Joe Rogan be removed from Spotify. What’s more, she claims that any fans who disagree with her should be considered “trash.”

Cassandra Peterson is only the latest in a line of public figures to speak out against Joe Rogan and Spotify. She revealed her statements on Twitter, urging fans to sign a petition while saying she doesn’t stand with “quacks and hacks.”

“I stand with musicians and artists, not with quacks and hacks. This cause is close to my heart – please sign:”

Cassandra Peterson then wrote directly to the fans that were insulting her for he post. Specifically, she called them trash.

“Regarding ‘fans’ (haha) who are leaving me because they prefer ‘disinformation’ over the truth, all I can say is, it’s time to clean house and separate the class from the trash! Buh-byeeee!”

She also gave an argument for any fans that believe removing Joe Rogan’s podcast is an example of censorship. In particular, Cassandra Peterson compared his podcast to telling people to drive drunk.

“For the people who call this ‘censorship’….Would it be ok if I had a podcast inviting ‘experts’ to encourage people to drive drunk? ‘If I crash and kill myself, big deal, it’s MY problem.’ ? How about the people you kill or injure in the other car? Do they matter at all to you?”

A variety of fans have further attempted arguing with her. Naturally, however, Cassandra Peterson has simply told them “bye” in a number of ways. She also took the opportunity to explain the difference with her career and what Joe Rogan has been doing.

“I never existed by bringing ill-informed ‘experts on health’ during a pandemic onto my show. Why play Devil’s advocate with actual scientists for ratings? You can do that, but there are real consequences. We don’t have the luxury of time to play that game right now.”

What’s more, she did further clarify what she means by “trash.”

“Trash = people who were never fans to begin with and who have come to attack for the sake of attack.”

It’s definitely interesting to hear Cassandra Peterson’s thoughts on the Joe Rogan situation, and why her Elvira persona is a completely different scenario. Odds are, we’ll continue to see celebrities support the removal of Joe Rogan from Spotify as the fight against misinformation throughout this pandemic continues.