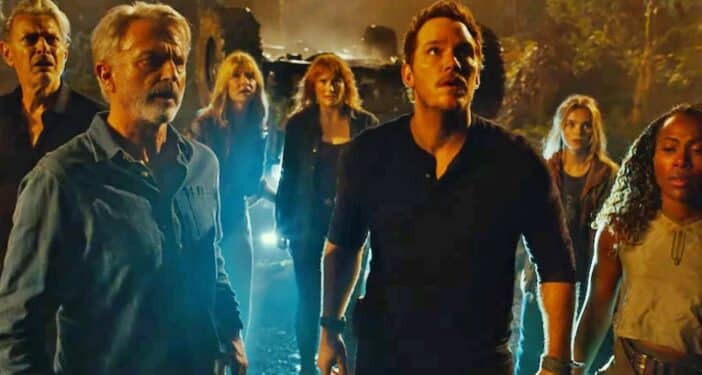 Jurassic World: Dominion has been on the minds of many Jurassic Park and general movie fans ever since it was announced that original cast members Sam Neill and Laura Dern would be making a return – along with Jeff Goldblum, who we saw in Jurassic World: Fallen Kingdom.

Well, if you were excited about the announcements – you’re definitely going to be excited now, as the first official trailer for the movie has been released.

We were also given this poster for the film:

As well as this synopsis:

“This summer, experience the epic conclusion to the Jurassic era as two generations unite for the first time. Chris Pratt and Bryce Dallas Howard are joined by Oscar-winner Laura Dern, Jeff Goldblum, and Sam Neill in Jurassic World Dominion, a bold, timely, and breathtaking new adventure that spans the globe. From Jurassic World architect and director Colin Trevorrow, Dominion takes place four years after Isla Nublar has been destroyed. Dinosaurs now live—and hunt—alongside humans all over the world. This fragile balance will reshape the future and determine, once and for all, whether human beings are to remain the apex predators on a planet they now share with history’s most fearsome creatures.”

When discussing the movie, director Colin Trevorrow had the following to say about it:

“One is we wanted to get the dinosaurs off of the island, which we’d been on for four movies, was something we needed the movie to do. I love what J.A. did with that movie and I was really into the idea of them being displaced, and put out into a world they didn’t understand and wasn’t welcoming of them at all. I was really fascinated with the opportunities this movie presented. And also, this movie is much more of a science thriller. We haven’t really been able to talk about genetic power and the danger inherent in it; what these dinosaurs existing on our planet right now really represents and how it all ties into the dangers we face today. So that’s what we got to do, and obviously I got to be able to work with Laura Dern, Sam Neill, and Jeff Goldblum in order to tell that story. It was all a bit of a dream. Can’t believe it happened.”