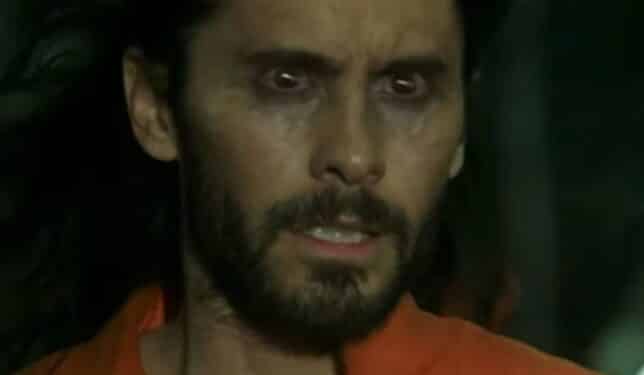 It isn’t any surprise that actor Jared Leto is a method actor, but perhaps fans will be surprised to know what extent he took this to during production on Morbius. As it turns out, because his character uses crutches to walk in the film, Jared Leto chose to do the same while taking bathroom breaks. As a result, it often took the actor 45 minutes to return to the set.

As revealed in an interview with UPROXX by director Daniel Espinosa, they eventually had to bring Jared Leto a wheelchair to keep things moving. Indeed, Jared Leto was that severely dedicated to his role as Morbius, the Living Vampire.

Here’s what Daniel Espinosa had to say about why Jared Leto took such long bathroom breaks:

“Because I think that what Jared thinks, what Jared believes, is that somehow the pain of those movements, even when he was playing normal Michael Morbius, he needed, because he’s been having this pain his whole life. Even though, as he’s alive and strong, it has to be a difference. Hey, man, it’s people’s processes,” Espinosa told the website. “All of the actors believe in processes. And you, as director, you support whatever makes it as good as you can be.”

However, he further explained that most actors have such eccentric choices when portraying a character:

“Almost all actors, in general, have their own reputation of being an interesting person how he works with their characters. I think that all of them have these traits,” the filmmaker added. “If you want a completely normal person that does only things that you understand, then you’re in the wrong business. Because what’s different is what makes them tick. It’s very hard to be able to say, ‘I can take this part away and I will still get the same stuff from him.’ I don’t do that. I’m more to see like, ‘Hey, if you’re doing this, we have to do this.'”

It’s certainly interesting to hear how dedicated Jared Leto was to his role as Morbius. The stories of when the character played the Joker for Suicide Squad have become quite famous at this point, so knowing he had similar albeit less traumatic tactics for this film is just as intriguing.