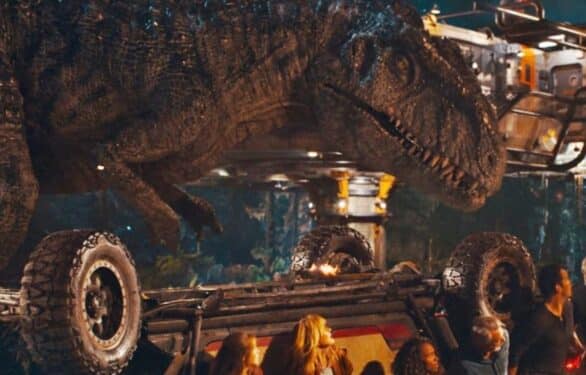 With so many fan-favorite characters appearing in Jurassic World: Dominion, it’s also nice to know that the film will be showing off a variety of new dinosaurs as well. The Jurassic Park franchise has done well with introducing both familiar dinosaurs and surprising audiences with new ones, some of which have been mutant hybrids. For this particular reveal, however, it looks like the filmmakers wanted to adapt the real-life Giganotosaurus for Jurassic World: Dominion. What’s also interesting is that director Colin Trevorrow insists that it was inspired by The Joker, the famous Batman villain.

He revealed as much while speaking with Empire Online, where an image of the creature was also shared. You can see that down below, along with Colin Trevorrow’s inspirations for the Giganotosaurus and what its motivations are in the new film. If you haven’t guessed already, because it’s inspired by The Joker, it’s mostly a chaotic creature.

As stated by Colin Trevorrow:

“I wanted something that felt like the Joker,” he began. “It just wants to watch the world burn.”

The image is also exciting because we can clearly see most of our human protagonists. This includes the original trilogy’s protagonists played by Jeff Goldblum, Sam Neill, and Laura Dern, as well as the new trilogy’s Bryce Dallas Howard, Chris Pratt, and Isabella Sermon. DeWanda Wise joins the group as a newcomer.

Colin Trevorrow also teased that Jurassic World: Dominion will be taking the franchise into some new directions. With the way that its predecessor, Jurassic World: Fallen Kingdom ended, this isn’t exactly a surprise. Nevertheless, it’s still exciting to hear it directly from Trevorrow himself.

“It’s an entirely new kind of movie,” he promised. “It’s the thing I’ve been waiting to do this whole time.”