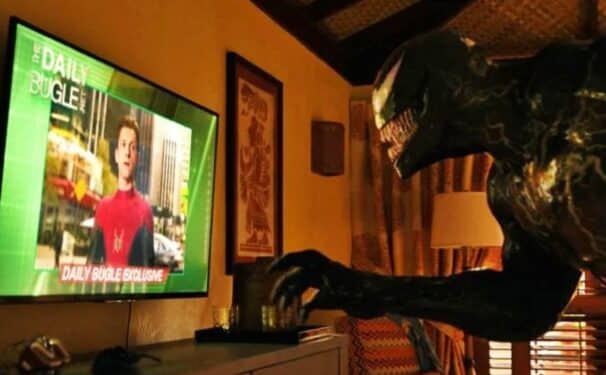 Fans who’ve seen Spider-Man: No Way Home know that the film finally brought Venom into the Marvel Cinematic Universe, albeit in a way that no one expected. The character, alongside Eddie Brock, was shown to be transported to the MCU during a post-credits scene in Venom: Let There Be Carnage. Fans thought it meant Venom would finally get to battle Spider-Man. Unfortunately, that wasn’t quite the case. Instead he was only brought in for a post-credits scene in Spider-Man: No Way Home, one mostly played for laughs before he was swiftly transported back to his own universe.

It was a scene that had nothing to do with the rest of the film’s narrative, although a piece of Venom was left behind. With that said, we’ll probably see more of him in the MCU at another point in time. For now, however, Spider-Man: No Way Home writer Chris McKenna did reveal that Venom almost played a bigger part in the film. He revealed as much while speaking in an interview with Empire via Digital Spy.

“So Eddie Brock makes it to the MCU but he never makes it out of a bar. But there were versions where he shows up earlier.”

“We were going to try to have him show up at the Statue of Liberty [for the final fight], and we were even toying with having him stuck in the Lincoln Tunnel,” McKenna concluded.

Though he did insist the final post-credits scene does allow “for some exciting possibilities in the future.” Unfortunately, when asked if that could include a showdown between Spider-Man and Venom, he only had the following response:

“I have no idea. That is above our pay grade. We are part of a bigger, larger universe that we are not the gods of, we’re just mortals in.

“I think it was a fun idea that the sixth [member of] the Sinister Six gets stuck in a bar and doesn’t get out of there, but maybe he leaves a little something behind. Again, we’re not masters of that course of that next adventure.”

It looks like fans will have to continue waiting to see what surprises the Marvel Cinematic Universe has in store for both Spider-Man and Venom.